For the seventh straight year, Clearwater, Florida, hosted the season finale for powerboat racers vying for national championships in seven classes that make up the Super Boat International fleet.

A total of 37 boats representing 36 teams competed at the Brighthouse Clearwater Super Boat National Championship on Sept. 27 off Clearwater Beach, and in a number of classes the fight for the title came down to this race.

In Superboat Unlimited, John Tomlinson and Jeff Harris had a strong points lead coming into the race, but their final Sunday of the 2015 season didn’t go exactly as planned. They battled engine issues from the start and barely earned enough points to secure the national title for boat owner Bob Bull, the 48-foot MTI, CMS Racing 03.

On the other hand, Bull and throttleman Randy Scism, who is the president of Marine Technologies Inc., the company that builds the boats, put on a dominant performance in Bull’s 52-foot MTI catamaran, CMS Racing 3. They took the lead when the green flag flew and never looked back, holding off the other six boats in Superboat Unlimited to take the checkered flag. For Bull, it was the perfect end to the season with one boat winning the race, and then the other winning the national championship. In the four races that made up the national season, one of the two MTI boats took top honors at each stop.

Second in Superboat Unlimited went to Marc Granet and Scotty Begovich in the 44-foot Victory, Miss GEICO, and third went to Randy Kent’s 44-foot MTI, Marine Concepts Speed Racer, which came back from spinning out the second lap.

The Superboat Extreme class entertained the fans on Pier 60 as the loudest boats in the event roared by during their 15-lap race. Billy Glueck and Brett Lee Furshman dominated from the start in their 38-foot Fountain, Twisted Metal Motorsports/Boatworx. They finished 23 seconds ahead of Peter Myer and Joe Stanch in the 40-foot Fountain, Hooters Instigator, which finished second but claimed the national championship. Third went to Steve Curtis and Joe Sgro in the factory-sponsored entry from Outerlimits Powerboats.

Attrition played a key role in the Superboat class as early favorites dropped out with mechanical issues. Returning to competition after an accident early in the season, J.R. Noble and Mark Kowalski in their 38-foot Skater, Stihl, battled with Billy Mauff and Jay Muller in Mauff’s 40-foot Skater, WHM Motorsports, which had the points lead coming into Clearwater. Bob Teague and Paul Whittier were a close third in Teague’s 36-foot Skater, Team Amsoil, while Ed Smith and Keith Holmes ran fourth in the 38-foot Skater, Cleveland Construction.

First to get bit by the gremlins was Stihl, which ran straight to the pits after the third lap. WHM Motorsports moved into the lead with Team Amsoil a close second and Cleveland Construction battling with Randy Sweers and Danilo Zampaloni in the 40-foot MTI, Sailor Jerry Autonation. Whittier and Teague seemed to be setting up WHM Motorsports for a late-race charge, but that never materialized when WHM pulled out on the eighth out of 19 laps when the team lost a blade on one of its props.

In Superboat Vee, a fleet of five single-engine canopied V-bottoms put on a competitive show even though the national championship was all but decided before the green flag flew. Steven and Stephan Kildahl, the popular father-son team from Sarasota, Florida, took the early lead in their 30-foot Xtreme Powerboats, Boatfloater.com, but they dropped out with mechanical issues on lap five. This gave the lead to Mark Niemann and Tom Madalena in their 30-foot Phantom with Steve Miklos and Jason McGonnel running second in Miklos’ 30-foot Xtreme, Sun Print, and Britt Lilly and Ronnie Umlandt taking third in Lilly’s 30-foot Phantom, LSB Lilly Sport Boats. The veteran Miklos came into the race with a commanding lead in points, so he was content to cruise to the national title in second place.

The Superboat Stock class is always competitive, but at the national championship, a dominant performance by one team put the other boats in the fleet on notice with the world championships in Key West, Florida, just around the corner. Owner/driver Rob Nunziato and throttleman Dan Lawrence in their 32-foot Doug Wright, The Hulk, held off an early challenge from throttleman Taylor Chastelet and owner/driver Chris Schoenbohm in their 32-foot Doug Wright, PatriotVapor, who would succumb late in the race to an engine problem. Kyler Talbot and throttleman Jay Muller ran a consistent race in their 32-foot Doug Wright, Talbot Excavating, to finish second, but they never challenged The Hulk. The biggest disappointment of the weekend was that Gary Ballough and Jimmie Harrison, who led points coming into the race, never even got a chance to try to keep their lead in Ballough’s 32-foot Doug Wright, FJ Propeller. A ground wire on one of the motors was loose and Ballough couldn’t get the boat on plane. The national title went to the Papa’s Pillar Rum team who finished fourth in the seven-boat fleet.

In the Production classes, the P3 race went to The Developer while the No Vacancy team took top honors in Production 4. For more information, check out superboat.com. 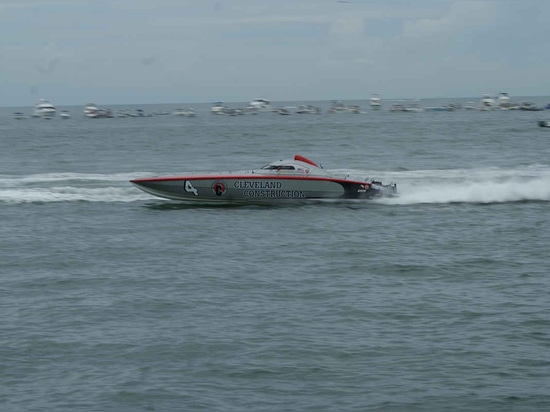 Cleveland Construction was just one of many powerboats vying for a title. 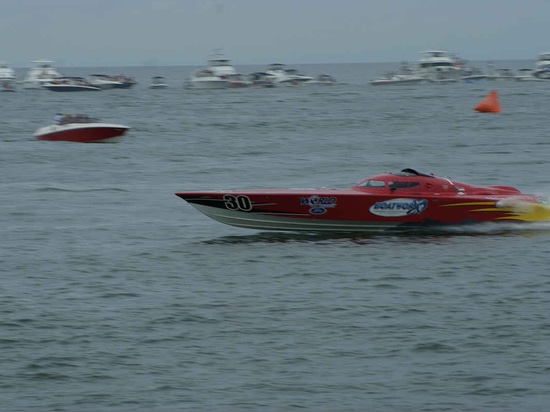