Tips for crossing the English Channel

Is there any better feeling than crossing the English Channel in your own boat? The sense of accomplishment and freedom is intensely rewarding and there’s nothing like being out of sight of land to ignite your sense of adventure. And then there’s a cold local beer and delicious French food awaiting you on the other side as you start your holiday in the comfort of your own boat.

The Channel stretches about 350 miles long and is 150 miles at its widest point, while the narrowest is a mere 21 miles in the Dover Strait, so planning and choosing your crossing point is key. Below are a few tips to help you plan your Channel crossing.

Where to cross the Channel

For first timers crossing the Channel, travelling with company is a good idea. Inviting an experienced sailor or an instructor along for the crossing, or travelling in a group or flotilla works well, and many yacht clubs offer ‘cruise in company’ trips.

Cherbourg is a popular Channel crossing destination for its ease of stay and proximity to both Brittany and Normandy. There are plenty of visitor berths, and plenty of space in which to manoeuvre. Facilities are very modern, and the harbour masters generally speak English.

Similarly the Channel Islands are a good stopover, topping Cherbourg for their beauty and economic value – berths are very reasonable and diesel is VAT free.

Calais is a good destination at the Eastern end of the Channel, either for those heading East to Holland and Belgium, and also for those berthed in the South East of East England.

What to pack for a Channel crossing

Use soft bags when packing, which can be stowed away, or leave the empty suitcase in the car before leaving your home port

Plenty of snacks for the crossing. Treats act as morale boosters, and help to diverge the long hours

Paper charts are strongly recommended as well as a chartplotter, in case of electrical fault

It’s a good idea to keep a ship’s log, as this is helpful to update en route in addition to drawing on the charts

Make all engine checks before leaving your home marina, make sure everything is stowed, and all hatches are secured

Read our rules and regulations guide here for cruising abroad

With some of the busiest shipping lanes in the world, choosing where to cross the watery highway, and avoiding the tankers and other cargo ships that pile through the Channel can be daunting. Pick a safe point to cross and a smooth and speedy passage will reward you.

Passage planning for a Channel crossing

Making a passage plan is a legal requirement when crossing the Channel, without which you can be prosecuted in the event of an accident.

Give yourself a few lee hours to spare – The weather is temperamental, and it’s preferable to slow down rather than speed up to make a tide or a sill.

Most freighters travel between 15-18 knots, and some even faster, so it’s never a good idea to try to outrun them. The horizon is deceiving, and they seem to creep up on you with alarming alacrity. AIS is a boon here as it gives speed, course and CPA (closest point of approach) of the cargo ships. Watch the wake, which can be significant behind a large vessel.

Shipping traffic is restricted to two traffic separation schemes (TSS), so cross these on a heading at 90° to ensure you nip across as speedily and safely as possible and comply with the ColRegs.

There are 13 ferries that cross the channel, which are worth keeping an eye out for and pencilling onto your charts to avoid a 35knot shock when you look over your shoulder.

Plan to arrive in daylight. Foreign ports can be tricky to enter, and the darkness can make markings and entrances tricky to spot and keep an eye out for fishermens’ pots close to both shores. If you do get caught short of daylight, read Yachting monthly’s tips for night sailing.

Generally, fast motor boats gain little by mapping tidal vectors to set a course to steer to iron out effects of tidal changes. However, for slower boats and longer journeys it can make a difference to times and fuel consumption.

Leaving in the night will often give calmer smoother crossings, but with it brings colder and more difficult navigation.

Watch out for tidal streams along the coast, while the Channel Islands and the Bay of Mont St-Michel on west Normandy have extreme tidal ranges, with a rise and fall of up to 15 metres. If heading to the Channel Islands, time your crossing through the Alderney Race carefully to avoid the 10knot tidal stream at springs.

Many French ports have a sill or a lock to enter – give yourself plenty of time, as it can often be a scramble to get into the lock.

Crewing for a Channel crossing

Taking watches gives the skipper a break. While the skipper will probably still want to keep watch, knowing that the crew are also looking around removes some of the pressure.

When you enter the French harbour, call up on the VHF and ask for a berth. While so many French people speak English beautifully, we have found it very apt to use what little French we have. On entering St Cast once we heard an English vessel before us repeatedly request the harbour master to speak English, to which he received a simple “non.” Shaking with terror, we asked for a berth in schoolgirl French and were met with polite, slow French.

Guide to cruising with pets 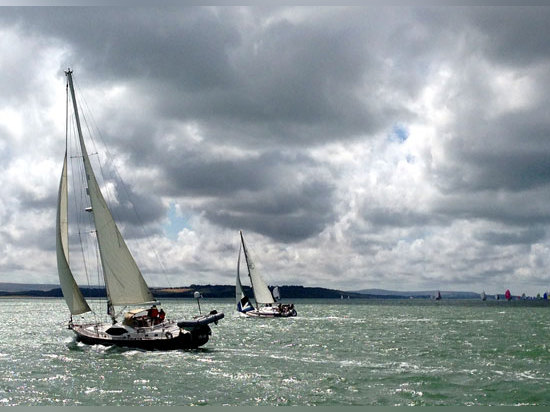