Kate Middleton will be gracing the headquarters of Ben Ainslie Racing and the 1851 Trust later this month when she visits Portsmouth on 12 February.

Olympic sailor Sir Ben Ainslie will join the 33-year-old, who is the Royal Patron for the charity, as she views an art project on BAR’s construction site, before attending a reception at the Spinnaker Tower, overlooking the base.

The Duchess of Cambridge, who is pregnant with her second child, had planned to see the site in the Camber Docks last October but had to cancel due to severe morning sickness.

During her visit she’ll be meeting local artists and students who are helping to create a mural for the 1851 Trust, and will be adding her own detail to the work.

She’ll then spend some time meeting those involved in building two specialist ‘Docking Rib’ boats to help with America’s Cup operations at the Spinnaker Tower.

Kate, who is a keen sailor herself, helped launch Ainslie’s British America’s Cup challenge at the National Maritime Museum in Greenwich last summer.

This will be the Duchesses first engagement after returning from a family holiday with husband Prince William and son Prince George.

Her visit comes following announcements that Portsmouth will also host the America’s Cup World Series in July 2015 and June 2016.

More than half a million visitors are expected to descend on the coastal city this summer to watch the spectacular racing off Southsea Common. 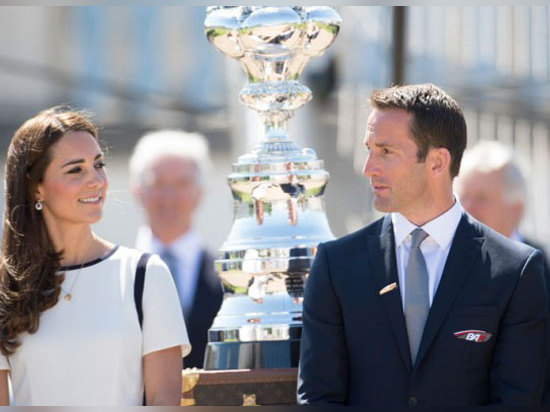