The details of Alan Gurney’s design

Alan Gurney was not yet 30 when timber baron Robert Johnson commissioned him to design an ocean racer that would “go for all-out speed, beating the competition by finishing first, breaking course records, and to hell with the corrected-time prize.” This was a novel idea in 1966, and the boat Gurney designed—the iconic Windward Passage—achieved those goals, breaking numerous course records and forever changing how ocean racers were designed.

But it’s clear Gurney never lost his love for design and sailing. The following is an excerpt from an unpublished article he wrote in 1996 about rigging a small sailing dinghy. He first dreamed up the idea when he was a young yacht designer sailing on England’s River Deben. Writing 40 years later on Scotland’s island of Islay, Gurney recalled those early days and explained how he finally realized his long-lost (but never forgotten) beer-mat sketches.

Gurney died of esophageal cancer in 2012. His widow, Carol, recently donated his drawings to the Mystic [Connecticut] Seaport Museum. Some are also reprinted in the Professional BoatBuilder article, which begins on page 24.

Waldringfield, a small village three miles downriver from Woodbridge, boasted a post office, a shop, a pub—the Maybush Inn—a boatyard, a yacht agency, and J. Francis Jones, yacht designer and surveyor. Here, under Jack Jones’s tutelage, I began my training. One of the inestimable advantages of youth is the paucity of possessions; but I did own a small shelf of books, and my proudest possession was a 10′ (3m) sailing dinghy named Mischief.

On a fine summer’s evening, the tide serving, Mischief and I would slip three miles downstream to an old waterside pub at Ramsholt for my weekly pint of locally brewed beer. Nothing else at Ramsholt but the inn, a quay, and a church. Being a romantically minded young man, and now one full of honest beer, sailing back to Waldringfield carried by the flood, ghosting by the rapidly covering mud banks and filling creeks, I would recite passages from Edward FitzGerald’s Rubaiyat of Omar Khayyam of Naishapur to rather startled curlews and avocets. For this was FitzGerald’s “dear old Deben,” where he spent many happy hours sailing his little schooner Scandaki, top hat firmly held in place by a scarf tied under his chin. “Fitz” is buried in Boulge churchyard, close to the Deben, a rose of Naishapur growing over his grave.

As to Mischief, my companion on these river jaunts, she was of varnished double-diagonal-mahogany planking on stringers; copper nail fastened with roves; sliding gunter rig with a red cotton mainsail—now fading to a becoming rosy pink—laced to solid Sitka spruce gaff and boom; a sheet-iron daggerboard—pitted, heavy, and with all the hydrodynamic qualities of a half-brick—and varnished ash oars for light airs. She was the older partner in this relationship. She taught me many things and never failed me in my more foolish sailing enterprises.

The only disadvantage to Mischief’s simple and easily repaired rig—a knife and lengths of codline in the bosun’s bag served well enough—lay in the reefing. The mainsail had to be dropped, and Mischief suddenly became cloaked in what appeared acres of canvas and two spars. The reef was tied in, the clove hitch moved up the gaff, the sail rehoisted. With any sea running, it was an exercise bringing forth salt water, curses, and terror in equal proportions. After one of these episodes in an angry-looking North Sea and the following white-knuckle ride across the Deben’s bar into the relative calm of the river, a chastened young yacht designer could be seen fortifying himself with a pint at Ramsholt and making sketches for an improved rig on a beer mat. For nearly 40 years, the beer mat long gone but the memory of that pint still lingering, the seeds of the improved rig lay dormant.

The scene now shifts to the island of Islay, off the west coast of Scotland, and a very different landscape and seascape to that of Suffolk. The shifting sandbanks replaced by more permanent rocks; the gentle rolling hills replaced by treeless windswept heights; the low, sandy shores replaced by high granite cliffs; the Suffolk beer replaced by Islay single malt whisky (Lagavulin 16 year old, three miles down the road from my house, being, in my humble Sassenach opinion, the best of the island’s produce—or all of Scotland’s for that matter).

Despite its 120 miles (193 kg) of coastline, Islay has few good anchorages for the cruising yachtsman. The west coast with its uncompromising cliffs exposed to the full force of the Atlantic gales and swells is a coast best avoided; the deep indentations of Loch Gruinart and Lock Indaal—almost cutting the island in two—shallow; the northeast coast facing Jura swept by fierce currents racing through the narrow bottleneck of the Sound of Islay. More welcoming is the stretch of coast along the southeastern shore. Here are myriads of small islands, islets, and reefs giving shelter to bays, inlets, and anchorages: ideal cruising ground for the small sailing boat.

During the summer months, down in the bay bobs a 13′ (4m) sailing dinghy sheltered by the outstretched finger of a low promontory. Pea Bea, for that is her name, is Mischief’s replacement: a fiberglass production boat made for fishing and powered by oars or small outboard motor. Having a visceral dislike of internal-combustion engines and outboards in particular, embodying, as they do, the beast in one of its more noisy, malignant forms, I planned, after buying the hull secondhand, on fitting a sailing rig. The beer-mat sketch, after its long dormancy, showed stirrings of life.

Lines were taken off, drawings started, lists made, equipment ordered. Islay has no yacht chandlers—everything has to come by mail or delivery van. Simplicity becomes the keyword for the rig design. A small jib and loose-footed mainsail—no boom to worry about—with a modified sliding gunter for the mainsail. The spars to be about the length of the boat and no longer than 14′ (4.3m), to fit inside the house loft space for winter storage. An old idea from square-rigger days was used to extend the 14′ mast to an effective length of 21′ (6.4m): a sliding topmast set after of the mainmast. Both spars are the same length and size—a square-section Sitka spruce. Two sets of plywood cheekpieces screwed to the sides of the topmast, one set at the heel and the other 5′ (1.5m) above, act as guides. The cheeks extend forward of the forward face of the mast, and bolts with plastic tube spacers, acting as rollers, keep the topmast fitted snugly to the mainmast. The topmast can now slide up and down the mast.

To raise and lower the topmast, two pad-eyes were bolted either side of the topmast 3′ (0.9m) above the upper cheeks, then two cheek blocks fastened either side of the mainmast head. Two topmast halyards, port and starboard, run through the cheek blocks and are held at the pad-eyes by a stopper knot. Haul on the halyards, and the topmast slides sweetly up the mast. With a bull’s-eye screwed at the topmast head, acting as a main-halyard block, and a sail track fastened to the aft side of the topmast, the mainsail can be raised with topmast raised or lowered. With the topmast in sailing position, the mainsail can be reefed by just slacking off the main halyard and tying in the reef. With the loose-footed mainsail I can also grab the clew and then roll the mainsail into a neat furl against the two spars.

Three tangs were bolted to the mast, one for the forestay and two for the shrouds. Shrouds are wire with swaged thimble ends, no turnbuckles, just lanyards to the forestay fitting and two bull’s-eyes acting as chainplates.

As to the hull, a small plywood foredeck was fitted and varnished mahogany side seats running from the center thwart to the stern thwart. Then came the problem of fitting a keel to stop Pea Bea sliding sideways. As an experiment (shades of the old Thames and Dutch barges) leeboards were tried. One a clip-on version and the other hinged. They gave Pea Bea all the weather-going qualities of a square-rigger. Leeboards might suit a load-carrying barge but have no place on a light dinghy.

The winter was spent cutting a rectangular slit in the keel, fitting a daggerboard trunk and making a plywood daggerboard. The transformation sailing upwind was dramatic. An extra rowlock is fitted at the transom for sculling or steering with an oar in shoal water. With the rudder unshipped, daggerboard raised, Pea Bea can ghost her way into the shallowest of waters. And when the wind fails, the long ash oars—the old “ash breeze”—provide the power. With this rig many happy hours have been spent sea-fishing for mackerel and pollack—and just plain pottering along the coast.

Before her metamorphosis Pea Bea was just another fiberglass production boat, characterless and nicknamed, rather derogatorily, the “plastic bucket.” Now with her tan sails and varnished spars, she glories in Pea Bea, having been transformed, Cinderella-like, into a tiny vessel of character, all for the same price as an outboard motor.

Pea Bea’s rig also happens to be a test one for a larger design on the drawing board. A small wood cruising boat for my own use, she will be 21′ overall, 8′ (2.4m) beam, 9″ (229mm) draft with rudder and daggerboard raised. She’ll have a large self-draining cockpit with a small cabinhouse topsides; and down below two berths, galley, chart table, toilet—a minimalist vessel for coastal cruising. Her name is going to be Resolution. But that, as they say, is another story. 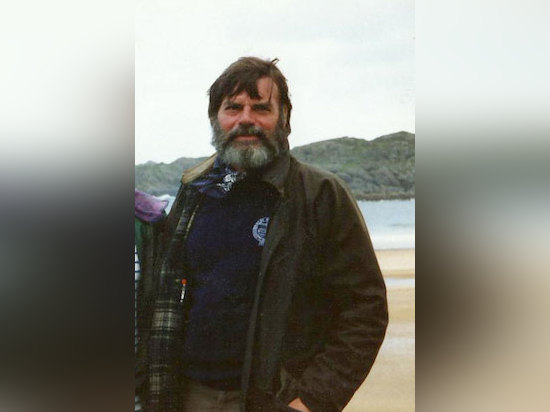 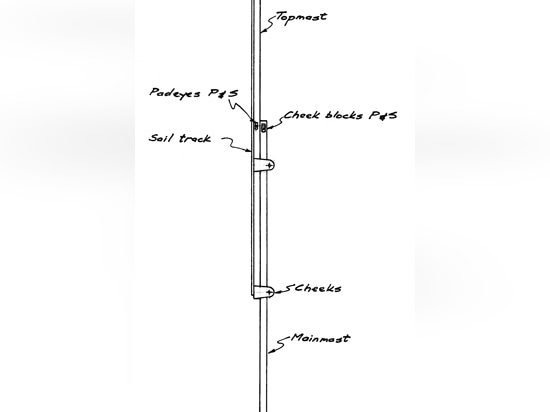 In Gurney’s plans, “simplicity became the keyword for the rigging,” he wrote. 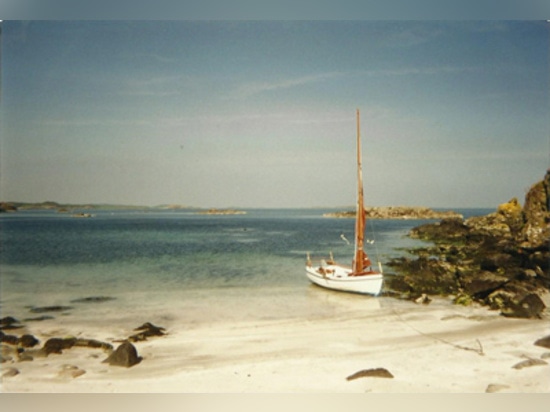 Before her metamorphosis, the Pea Bea was called the “plastic bucket.” 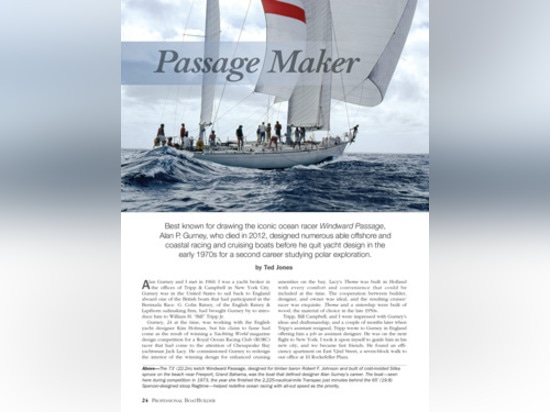 Read about Alan Gurney’s designs and career in Professional BoatBuilder No. 151.