Their observations about boats, boat design, and the business of boatbuilding are consistently imaginative, optimistic, and pragmatic, even in the current economy. Steve Callahan’s complete profile of Gold Coast Yachts, “Their Phone Is Ringing,” appears in Professional BoatBuilder No. 124.On Designer-Builder Dick Newick Roger Hatfield was heavily influenced by Dick Newick early on, but always kept true to his own approach.

“Newick often credits coming from the world of kayaks for his inspiration in design,” Hatfield says. “I’m happy that my design portfolio has been largely inspired by my cruising-boat experience. Cruisers have a lot in common with workboats in terms of needing durability and payload. So many people out there try only to bring raceboat experience into workboat mode. The result really suffers if it’s not set up for any of the stresses or loads.”

Hatfield also acknowledges much of Newick’s wisdom, such as urging designers to spend “a third of the time in the shop, a third of the time sailing, a third of the time designing.” “That’s just right,” says Hatfield, “especially for somebody starting out.” Hatfield also cites mentor Peter Spronk, who taught him a great deal about wood/epoxy construction options, and a sense of practicality similar to Newick’s. Hatfield: “I once asked Peter, ‘How accurate do the lines have to be?’ He looks at me and says, ‘That’s a pencil width. You can’t draw any more accurate than that.’

Says Hatfield, “I came into this business as a trimaran person. Because I'd been a monohull sailor, a tri had, in effect, training wheels, and was an easier boat to step and think about. It’s funny: The public seems to accept a cat more easily because of its symmetry, but the tri is probably the more sophisticated boat. I, on the other hand, was slower accepting the cat because windward ability always was, and still is for most sailors, the single most important quality. If you can’t glide and climb in a paraglider, if you can’t get to windward in a sailboat, you’ve got nothing.”On Catamarans

Gold Coast catamarans feature very practical shapes for both construction and sailing efficiency. Relatively high freeboards and cabins keep wing decks well above waves. “You can’t hide the fact that you need a high wing on a catamaran. It may make a small boat look like a box, but that’s just the way it has to be,” Hatfield says, after years of repairing wings on low-slung cats like Spronks.

Early on, Hatfield recognized that speed and energy efficiency of hulls were highly dependent on hull length-to-beam ratios. For his early trimarans, he employed ratios of 9:1 or greater. But, especially for catamarans, “I don’t like to go below 12:1,” he says. His faster sailboats employ 14:1 or more, as do his wave piercers.On Stern Details

“My father used to say that it’s easier to push water than to pull it. If you’re sailing in a pram, it’s always faster to go forward and have the stern out than to be sitting aft and have the bow out,” says Hatfield. “When you’re driving a displacement catamaran, which is what all of our boats are, you need to clean up the stern to leave the wake as clean as you can. The two combinations with which I’ve been involved for displacement cats require pulling the stern back to not quite a point, but very close. Whether you do it horizontally or vertically doesn’t matter.”

Typically, stern sections for a sailboat are flattened horizontally and are transom-ended, so as to provide a smooth exit; or, flattened vertically, in a double-ended canoe stern. At Gold Coast, the sections have been flattened horizontally. For heavier motorsailers, however, with their larger props, the aft sections often are hollowed in profile—a feature seen in the extreme on tugboats. Gold Coast has also developed, in conjunction with charterboat entrepeneur Sonny Eymann, a “canoe stern” option for heavy boats, especially powercraft, whereby the underwater sections come to a point in a vertical orientation, while the transom above may remain quite flat.On Powerboats

Gold Coast aims for high efficiency at moderately high speeds. Hatfield: “Displacement cats don’t like to go above 27 or 28 knots. Rudders don’t like to do it; propellers can, but they don’t like it, either. You’re not going to be reading the surface if you go faster than that. The wave piercers slice through it because they have a hard time reading the surface, but you have to slow down and contour it if it’s really, really rough. We’re building boats that operate from 12 to 23 knots, or about twice as fast as a displacement boat. That’s a typical operating range that benefits from a higher prismatic, a long straight hull, and a round bottom.”

Hatfield notes that many current kudos to “green technology” often miss the point. For example, if you burn diesel to generate electricity, it’s not all that green. He points to a wave piercer and says, “This is a bright green boat. Yes, the wave piercers have engines, but if I’m driving along the highway and burning 18 miles per gallon in my SUV, and I get one that burns 26 or 40 miles per gallon, isn’t that a greener SUV? Isn’t there some credit due? Our powercats are that much more fuel-efficient than most of the product out there.” He adds, “It is the total energy cost to manufacture a boat over its life span that is hidden, and that really needs to be computed—whether it’s the pultruded glass item that we buy, or a plastic vacuum bag made for infusion. What is the calorie or Btu count total? What does it really cost to build a foam boat? And when it’s done, then…over its life span? What are the savings in operating fuel, which can be huge?”On Party Cats

A party cat may have the aesthetics of a floating Humvee, but it illustrates Gold Coast’s focus on customer needs rather than its own vision. The true party-cat features a dance floor complete with mirrored disco ball. Hatfield is proud of the engineering of the connective structure and cabin, which must support passenger load—even on the upper deck.

On Wood, or Composites

Gold Coast has long employed all kinds of materials, but the company generally began with wood/epoxy construction, and now builds almost entirely with synthetic composites. The principles remain the same, but sometimes require different approaches. Hatfield notes that with wood construction, you always make a piece a little big until you can fit it, because it’s really hard to add wood once cut too small. But with foam/glass construction, you want the piece to be exactly the right size or a little smaller, because it’s easy to stuff a piece of foam behind it, fillet it, and tape it into place.

Gold Coast routinely employs design concepts from raceboats but hones them to be practical. Rich Difede notes how he and Hatfield might choose a solid 4" (101.6mm) advanced-composite rudderstock with tapered collar and autoclaved rudder for $6,000. But, they still prefer to build their own from a schedule-80 stainless steel tube with a simple molded form over it for $600—which, Difede is quick to point out, “steers the boat just fine.”On Staying Competitive

Difede warns, “Some projects get kind of lost in thinking that goes: ‘Man, this is going to be the best boat! Everybody is going to want one, so I’m going to spend a zillion dollars on a zinger steering system, rather than simple cables.’ Well, we’ve been successful because we’ve kept things consistent and pragmatic.” He and Hatfield have gone from building boats at contract prices, to time-and-materials, but they continue to seek ways to balance their own risks with those of clients. Difede points out that in the past two years, the cost of many supplies increased by 27%; whereas in six months during this recession, some basic laminating materials fell from $4.87 a pound to $4.09. An interim strategy he’s considering is to quote labor while having clients absorb the risk of fluctuating materials costs.

After decades of having to train its own workers at Gold Coast, Difede has become active with local government in St. Croix and, nationally, in coordinating efforts to train workers for the marine trades through the Marine Industry Technical Education Council, or MITEC—particularly with council members in Florida, Rhode Island, and Maine. “I don’t want to invent the whole thing,” he says. “Who’s got what parts? Let’s put it together and use it.” Suitless and with ponytail, Difede can still get quick responses from the Islands’ governor, something more difficult to achieve on the mainland. “He appreciates what I contribute, and I don’t need to be anything other than who I am,” Difede says. “I’m not doing this for ego. If it doesn’t make sense for Gold Coast and the community, then I’d rather stay home and play guitar; but, it’s another resource for us to deploy for our own training purposes. As you get older, you want to give back in some way. Roger was a Scout leader for some years. Giving back is the feel-good that I get. You have your family. You have your significant other. But even at work, you’re in a community that at least communicates with each other. That’s huge.” 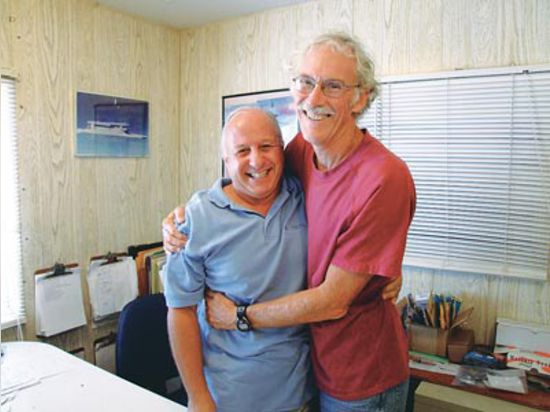 Rich Difede, left, president of Gold Coast Yachts (St. Croix, Virgin Islands), and Roger Hatfield, GCY’s vice-president and designer, have managed not only to remain in partnership for 28 years but also to remain friends. 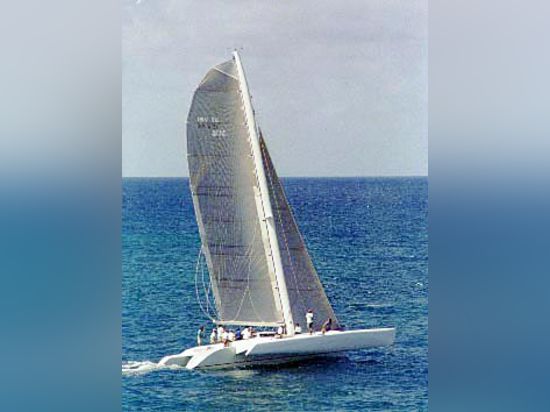 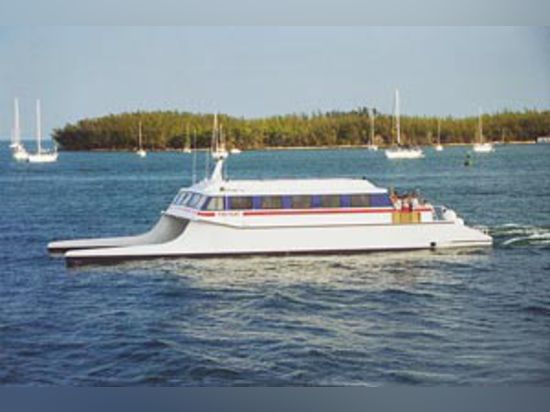 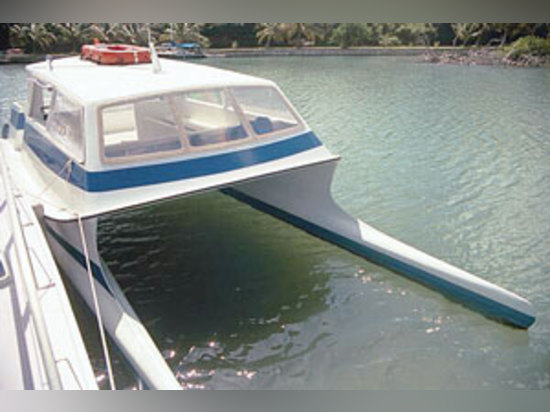 A smaller version of the same patented efficient powercat design above.