ROUND THE WORLD ON A SPORT CATAMARAN: HERE WE GO AGAIN!

Sailing round the world on a sport catamaran

We left Yvan Bourgnon after his shipwreck on the coasts of Sri Lanka, when he had already completed two thirds of his completely crazy challenge: sailing round the world, singlehanded, on a sport catamaran.

Except that with his catamaran destroyed and finances run dry, the sailor was stuck. But it takes more than that to dishearten Yvan, who launched a participative financing campaign on the internet, via the Fosburit platform. The result: 328 donors believed in his project, and he was able to relaunch the adventure. And now the town of Ouistreham Riva-Bella is going to allow the project to rise from the ashes.

Next March, the sailor will therefore be setting off from Sri Lanka aboard his new sport catamaran, to finish his round the world trip. The aim is to reach Ouistreham Riva-Bella, passing a good distance off Djibouti (and its pirates), then going through the Suez Canal, before sailing round Europe via the Mediterranean and the Atlantic.

If everything goes well, he should arrive in May or June 2015. 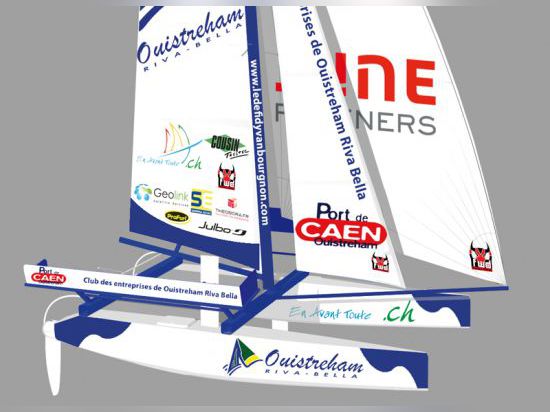