The best sails for downwind cruising

What’s the difference between a drifter, a gennaker, a code zero, and a screecher? Where does a spinnaker fit in? And if you’re a cruiser, what sail should you use for downwind sailing, anyway?

There is no single “best,” because everything on a boat is a compromise, and individual styles/needs vary, but we have some opinions on the optimal choice for most cruisers.

This question came up on a women’s sailing forum I participate in recently. Because Jamie is a sailmaker, I asked him for help with a response that would be useful to differentiate the options for downwind sails. Differences between these sails aren’t difficult to understand, but get confusing because the names are mixed up or misused. I knew Jamie’d make sense of it, so he’s helped me organize this primer to provide basic general information on each sail, as well as his opinion on what’s the best for cruising purposes. Punchline: code zeroes are great for cruising. Does it cover all bases? No! What’s the catch? Keep reading!

The descriptions below are for cruising context, racing applications add complexity. Putting this together was a pushme/pullyou between me and Jamie: my urge is to simplify (I’m a fan of Big Animal Pictures), Jamie wants to share detailed technical knowledge (he knows way too much about the subject). Hopefully we struck a balance, but if terms are unfamiliar, it might help to read some the definitions at bottom- or if you’re impatient, skip to the summary: What sail should you use?

Complexity: moderate to high, for experienced sailors; easier on catamarans

Sailcloth: nylon or polyester (not good for cruising), 0.4oz to 2.2oz per SY

Construction: tri-radial is best (and typical); older sails can be bi-radial or crosscut

Hoist/douse: with a sock (easiest) or directly from bag

This is a symmetrical sail, so vertical edges are free flying and either can be luff or leech. For monohulls, a spinnaker pole attached to tack controls the sail’s angle relative to the wind and boat. In some situations, monohulls can “free float” a spinnaker without pole. Multihulls can use a pole or free float the sail between hulls. Spinnakers have more involved rigging (sheets, guys, pole, topping lift, downhaul, halyard) and require more attention trimming, although catamarans have it easier because they can fly from the hulls and avoid a pole. Cruisers tend to over-trim to reduce the attention otherwise required, so they’re rarely used optimally. Spinnakers can be designed and built as general-purpose, or for specific wind characteristics.

Merlin’s crew estimates they used a spinnaker for 80% of the Pacific crossing. This pic of their boat above (courtesy of Emmanuel Beucher-Hall) helps show why it’s easier on a catamaran: instead of needing a pole they can fly it from each bow, using a quick release clip on one side for safety. (PSA: this beautiful boat is for sale!)

Sailcloth: nylon or polyester (not good for cruising), 2oz to 3oz per SY.

A drifter is for the lightest of winds only and the size (geometry) varies widely. It’s often attached to a stay, but can be a free flying luff with Dyneema luff line. Drifters have a very full shape to slowly bend wind around the sail. They’re relatively inexpensive, but have a very limited range of use.

Sailcloth: nylon or polyester (not good for cruising), 0.4oz to 2.2oz per SY

Hoist/Douse: with a sock (easiest) or directly from bag

Unlike spinnakers, asymmetric sails have only one vertical edge that can be the luff, unless hoisted incorrectly- which is symmetrically embarrassing! Sail shape is fuller in the front (luff) and flatter in the back (leech), like a headsail. It is easier to rig and fly than a spinnaker. In general, the tack attaches at the bow via a tack lines and has a free-flying luff. There are many geometry and shape variations based on boat/purpose/etc. but a general-purpose sail is most common. Using a spinnaker or whisker pole adds complexity (though still simpler than spinnaker setup), but helps the sail fly better. When close reaching, attaching the tack to pole give complete control of tack location. For broad reaching to DDW, attaching pole to clew helps project the sail to keep it filled and reduce collapsing.

Sailcloth: nylon or polyester (not good for cruising) or laminates (polyester and/or high modulus fibers)

Storage: rolled up, so less bulky

Now we’re into it! Code sails (0, 1, 2, 3, etc.) are designed with very specific purpose (wind velocity/angle) for racing. A “code zero” for cruising doesn’t really fit what implied within racing. Some sailmakers are branding names (Doyle UPS, etc.) but let’s just call it a cruising code zero (CCZ). A screecher for cruising has the same general characteristics as CCZ, but for multihulls. To simplify here, they’re collectively called CCZ/S.

Asymmetric sails blend features of spinnaker and headsail to simplify flying. CCZ/S takes design another step closer to headsail than the rest: it still has a free flying luff, but geometry and shape slide closer to a genoa. This sail’s purpose is to increase effective AWA sailing range, and can approach close hauled angles, and handle a higher load (windspeed). It’s easier to fly, and takes up less space stowed. Furling is generally easy, although practice and good gear help. CCZ/S can be made with a UV cover to remain hoisted for longer periods, making it again one step easier to use.

The virtues of the CCZ/S Jamie wanted to share run for several more paragraphs, but this hopefully captures the essence.

What sail should you use?

Every boat, every crew, every situation are different, but Jamie offers these opinions as a general guideline. It’s not an attempt to be the gospel of downwind sail choices, but a summary to help cruisers understand the relative pros/cons in a succinct manner. Meanwhile, there are other options like double headsails, a poled out headsail, etc.

Spinnakers are too much effort for most cruising boats, although they are easier on cats. It’s best sail for deep angles or dead downwind, but DDW is a slow point of sail best minimized. If you have one, make the most of it, but if you’re shopping for a new sail, I wouldn’t recommend it for most cruisers.

Drifters have a limited purpose, so aren’t usually a good choice unless you’re in an area with very little wind and endowed with a great deal of patience.

Asymmetric (cruising chute/gennaker/MPS/etc.) are a step in the right direction, but their all-purpose designs, tend to limit wind velocity and angles. We have an asymmetric sail for Totem that’s gotten far less than expected: it’s either to light, too windy or the angle is too tight. (Jamie wishes we had a code zero!)

CCZ/S is the best choice, for three reasons. First, they can be used across a wider range of wind speeds and angles. Second, they’re easy to set and fly. Finally, they’re more space efficient to store. Further, most cruising boats don’t spend much time beating upwind (close hauled and tacking). A CCZ/S can’t sail higher than 60°-sh degrees like a genoa, but from that angle back a CCZ/S is a better sail than a genoa; thus, for many boat eliminates the need for a genoa. Instead a CCZ/S and 110%-ish all-purpose furling headsail cover a big range of conditions

If you’re in the market for a CCZ or any sails, Jamie would love to work with you. He’s collaborating with a New Zealand sailmaker to build great sails, shipped anywhere in the world. His expertise can benefit you, and your orders help us keep cruising. Not in the market, but just have questions about sails? Feel free to get in touch and Ask the Sailmaker. And, thank you! 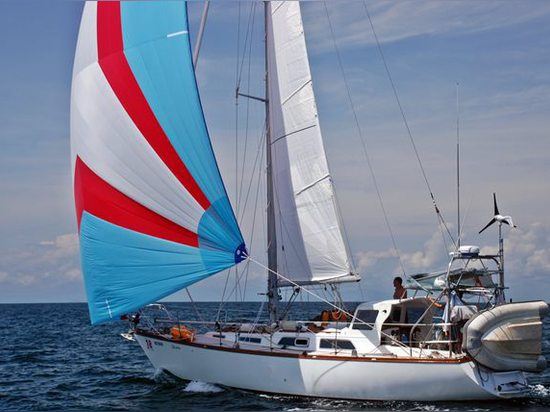 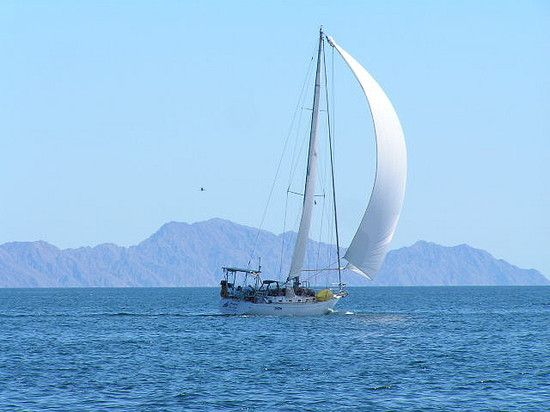 Flying the asymmetric on Totem in Mexico’s Sea of Cortez. Courtesy of Jesse / SV Frances Lee 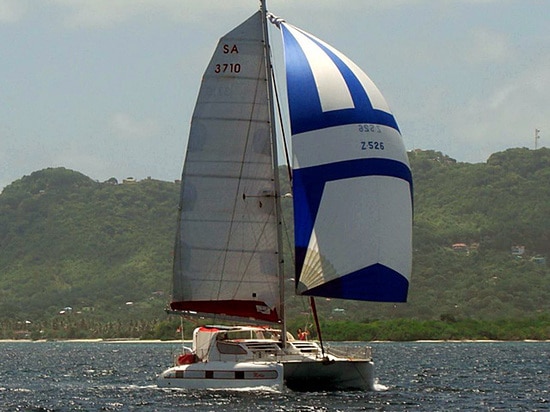 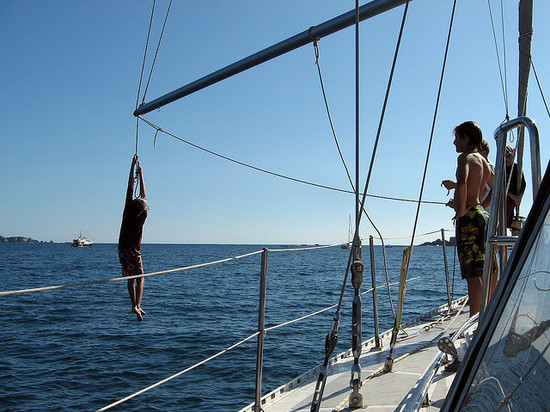 Poles: not just for sailing! 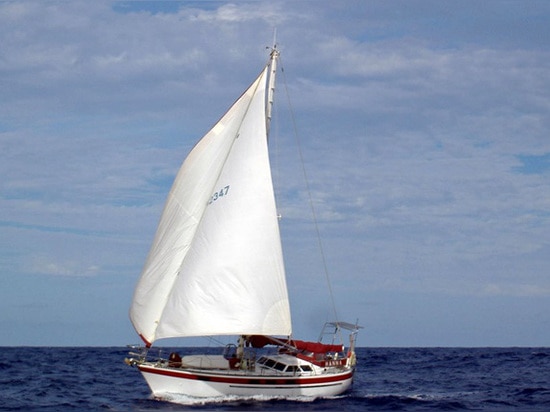 Hanna’s mainsail cover stayed on during wind-and-wing saling for at least 17 days out of their 21 day Atlantic crossing. Thanks Jan A. for this photo!