The addition to the NG line announced last year has resulted in the launch of the first 57 footer 'new style' in June. The most striking changes compared to the familiar NG models are the steep, high flare bow and the new design of the extended wheel house with continuous, all-around windows.

During the trials in the Wadden Sea there was a moderate wind with a wave height of around 1 metre. Despite the calm weather conditions, the effects of the sharp bows were clearly perceivable: no bow wave and no spray. Sailing slowly at an inland waterway speed of 9 km/hour the two Cummins diesels consumed 6 litres of fuel per hour with a noise level of 49 (!) decibels. At a hull speed of 9 knots, this steel version of the NG57 consumed 45 litres of fuel (5 litres a nautical mile/2.7 litres a kilometre) with a measured noise level of 57 decibels. At this speed the additional cost of the double engines is earned back through fuel savings in 2,000 sailing hours at the current fuel prices. The top speed in the Wadden Sea was over 15 knots, a result of the customer's choice for optional double motors with Cummins QSB 6.7 480 HP. With the standard Cummins QSB 6.7L 305 HP the yacht will be able to achieve its efficient hull speed of 9.7 knots under virtually all conditions. The NG57 S is CE A certified.

Hans Webbink, owner of Steeler Yachts: "These new models, of which the 57 footer is the first, build on the successful design of the NGs but continue a trend that was started by Steeler Yachts itself with the introduction of the Panorama Flatfloor, singled out as European Powerboat of the Year 2015. They have space and light on board, an open layout, unprecedented sailing qualities in terms of fuel consumption, speed, noise, stability and spray."

The new hull form and superstructure have a favourable effect on a number of aspects that all happen to start with a 'S': space, spray, speed, safety and seaworthiness. That explains why a 'S' will be added to the NG logo. These S-line models will therefore be produced with more standard equipment.

Not steep bow, not flare bow, but steep bow with 'high flare'

The new hull form of the NG S-line models is a further developed derivative of the hull form of the Panorama FF, acclaimed by all as being 'cutting-edge'. The sharp cutting angle of the bows and the higher spray rail minimise the bow wave, which results in lower fuel consumption and much less spray. The high flare provides extra protection against spray in extreme weather conditions.

The overall length of the cockpit and wheelhouse is 8.90 metres, which is unprecedented in this length category. This generates a level floor 'entertainment area' that makes virtually any conceivable layout possible.

Open layout for maximum experience of space and communication

This NG57 S has two accommodation levels with an owner's cabin amidships, covering the full breadth, and of course with its own bathroom. There is another very spacious cabin in the forecastle with its own bathroom and a living room over the entire breadth and a seating corner. A notable aspect is that the wheelhouse and accommodation area have an open connection to each other rather than being separated by a partition. The windows in the hull and the hardened glass ceiling panels ensure that all of the compartments have plenty of natural light and that there is contact with the water and surroundings all around.

Webbink: "Steeler is continuing to custom-build the interior for every customer and this also applies to the first NG57 S, in which optimum use is made of the interior space down to the last square millimetre in keeping with the customer's specific requirements.

The construction of a number of sold NG S-Line models is in full flow and the following are in the starting blocks for the coming year:

Available as standard with Cummins QSB 6.7 litre 305 HP engine, a bow thruster, central heating, Flexiteek cabin floor, electric anchor winch, PUR insulation, 5000 W combination converter, 10 batteries, completely fitted kitchen, two bathrooms with shower and electric Planus toilets, Corian tops in the galley and bathrooms, double glazing throughout, including panorama windows in the hull, audio/TV and LED lighting with dimmer switches. The layout (three cabins as standard) and the choice of wood types and upholstery are according to customer specification and without any additional charges.

Hull built with < 3mm tolerance; preservation and spraying: under the supervision of an independent surveyor, minimum gloss level 95 GU. 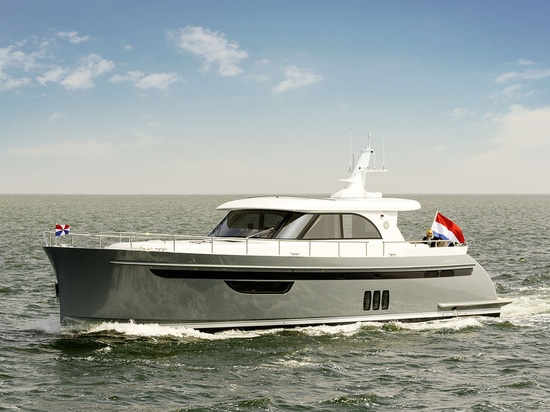 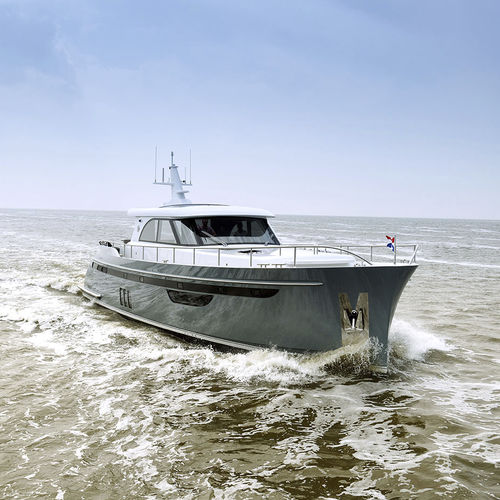