Only 0.13 Pct of World’s Fleet Tonnage Needed for BWM Convention to Pass

IMO’s Ballast Water Management (BWM) Convention is a step away from being ratified after Peru acceded to it, which brings the number of states having accepted the convention to 51, representing 34.87 percent of the world’s merchant fleet tonnage.

Ambassador of Peru to the United Kingdom, Claudio de la Puente Ribeyro, met IMO Secretary-General Kitack Kim at IMO HQ in London on June 10 to hand over the instrument of accession.

Adopted in 2004, the convention is scheduled to enter into force twelve months after passing the required gross tonnage threshold of 35 percent and ratification by 30 states.

Under this convention, all ships in international traffic are required to manage their ballast water and sediments to a certain standard.

IMO Secretary-General has repeated his request to countries that have not ratified the convention, to do that as soon as possible in order to establish a certain date for entry into force, which will facilitate the work to make any necessary amendments to the convention. 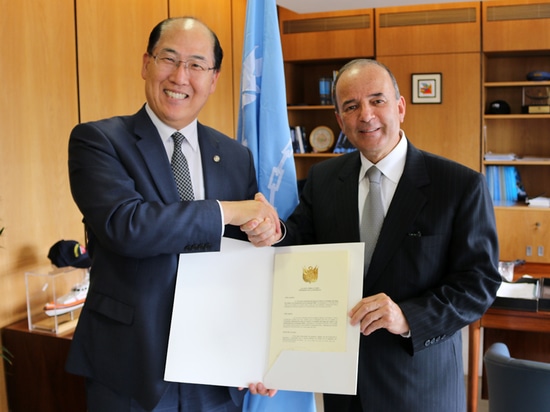