In making the crossing in just 5 days, 14 hours, and 21 minutes Comanche has knocked over 24 hours off the prized record held by Mari-Cha IV for the last 13 years (subject to ratification). She sailed the 2,880 nautical miles at an AVERAGE speed of 21.44 knots!

Comanche, sailing without her regular skipper Ken Read due to America’s Cup World Series commentating commitments, was on standby for the record attempt since the end of June. She departed on the evening of the 22 July from New York – and crossed the Lizard finish line at 1145 today, 28 July.

Comanche was built precisely for this purpose: to break records. She set a blistering new 24-hour distance record for a monohull during the Transatlantic Race last year – 618 miles, at an average speed of 25.75 knots. But this Transat record is arguably the big one.

Comanche’s owner Jim Clark said: “The guys have once again powered our fantastic fat-bottomed girl to another title. I am so proud of the entire team and everyone involved in the entire program from top to bottom, the best in world, getting the best out of Comanche. Perfect harmony, and Kristy and I are over the moon.”

Speaking ahead of the departure, Comanche owner Jim Clark stated “Comanche has already proven her potential in major events all around the world and this looks to be a great opportunity to continue her legacy…The crew is made of some of the best sailors in the world who all have great pedigree. I have a good feeling about this attempt.”

Clark, the Silicon Valley magnate and founder of Netscape, has owned a number of high profile yachts that includes the groundbreaking 90m schooner Athena, and the J-Class Hanuman.

North Sails President Ken Read, the former Puma Volvo 70 skipper, has been helmsman on Hanuman and collaborator on Clark’s recent projects. “This latest record is testament to Jim and Kristy’s vision,” he said. “This is the culmination of six years of hard work and a huge team of experts offshore and onshore all working as one.”

For this crossing, Comanche’s rockstar crew, some of who sailed with Read on the Volvo Ocean Race, was led by Casey Smith, and included regulars Tony Mutter, Richard Clarke and navigator Stan Honey.

Honey picked the ideal weather window, ahead of a front, with flat seas and steady winds from a favourable angle. Following Comanche’s progress on the Yellowbrick tracker it was amazing to see how consistently she remained in the mid 20-knot bracket.

Crewmember and photographer Yann Riou described it as a weather pattern that only happens a couple of times a year. “In front of a low pressure system, moving at the same speed as we do… south-westerly wind, flat sea, all the way through – on the paper, this could not be any better.” In reality there was more thunderstorm activity than the crew had anticipated which enforced a couple of slower gybes.

In comparison to Mari-Cha’s historic ghost trail however (in white above), Comanche was able to sail a much more direct route. (It makes the 2003 record all the more impressive – see more details on MCIV below). The last 50 miles to the Lizard involved a comparatively slow hitch south of the Scilly Islands.

Comanche sailed with ‘only’ 17 crewmembers who used manual powered winches and hydraulics for this record attempt. 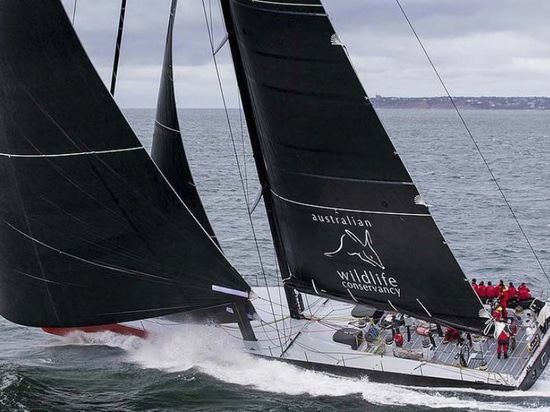