In the beginning of 2016 one of the largest and most modern test facilities in Europe for gear units was put into operation at the RENK AG headquarters in Augsburg, Germany.

The multifunctional test facility is suitable for the testing of prototypes or special equipment destined for the shipbuilding, automobile or industrial sectors.

The 40 x 60m building with a height of 20m was never destined to be used for testing only the gearboxes and propulsion systems produced by RENK. It is also available for external producers of propulsion systems or propulsion components. The test facility offers the highest performance: It allows for example for a power capacity of up to 12 megawatt at 10 revolutions per minute and can take a torque of up to 11 million Nm. Around 100,000 litres of oil are available for testing the equipment. The cooling system contains about. 300,000 litres of water. The pumping capacity alone is 1,450m³/h. There are 10 motors integrated into the test facility which can be used as generators and in a bidirectional way as well. Due to their variable configuration they can be used in testing combinations. The smart mechanical facilities allow for the testing even of complex and high volume propulsion systems with short installation or set-up times.

The test facility is built as a multifunctional test bed and designed to test a multitude of parameters on different loads. The testing installations are set up in a way so that propulsion systems can be tested. Testing of the complete ship propulsion systems including power switching station, frequency converter, compensation plant, motor, gearbox at low or medium voltage in every configuration can be easily handled.

The equipment of the test facility allows a variety of tests: From functional and capacity tests to measurement of process parameters and acoustic behavior of structure- and airborne noise. The 1,250 square metre test area is subdivided into two large and two smaller test beds in different rooms of the building. The two large ones measure 37 x 15 m and 37 x 13m, the small ones have a size of 15 x 6m and 20 x 6m. This area is covered with 30cm thick slabs and is anchored to a reinforced concrete foundation up to 3m thick for loads of up to 1,000 tons. The cranes in place can lift weights of up to 200 tons.

The multi-functional test facilities deliver top performance in terms of other parameters as well. They have the option of a power intake of 12MW at 10rpm (e.g. a wind turbine gearbox in back-to-back- operation) which results in an operating torque of 11 million Nm.

With the aid of intermediate gears, test specimens can be subjected to torques of up to 500,000 Nm and maximum speeds of up to 20,000 rpm under load of up to 12MW.

For this purpose there are five AC motors with an output of 6MW each and five DC motors with outputs of 1 MW and 600 KW. Each motor can also be used as a generator, thus feeding the braking energy back into the system. Hence, load tests of 12MW simply consume the actual losses caused by the tested objects and are therefore highly efficient.

The test facility is adapted to the specific needs of manufacturers of complete drive and propulsion systems as well as their components such as motors, brakes, compressors, gears and, for every sector—marine, automotive or industrial. The multi-functional test facility is especially suited for testing prototypes and pre-production assemblies. In this way manufacturers save the time and costs that would be caused by setting up the test equipment themselves.

Cost and time savings are particularly high whenever complete marine propulsion systems need to be tested. By outsourcing such work, contractors have the possibility of thoroughly testing the propulsion system in its entirety before the commissioning stage and not having to wait for it to be installed onboard. This translates into significant savings in time and costs otherwise involved in onboard testing.

Another advantage lies in the fact that the systems are installed in the test field completely with including all electrical infrastructure. This means that the signals and interfaces can also be tested. Such an all-inclusive test set-up provides a high level of validation reliability even before commissioning.

CLOSE TO THE ACTION YET SAFE

The Augsburg multifunctional test facility is one of the few worldwide to allow customers to personally experience the testing in close proximity of drive systems and their components while safely protected from potential hazards. To make this possible RENK provides observation rooms in a gallery around the test fields. There companies can follow the testing of their products in every detail, either on a monitor and through camera installations safe from noise or live from the viewing platforms.

In order to have the right amount of oil available throughout operation, each of RENK’s four test beds has an integrated lubricating oil system for closed loop lubrication. The oil volume of each is 14,000litres, and they can each deliver up to 4,500litres/min during which the incoming oil passes through a filter with a nominal mesh size of 10µm. For the purpose of heat discharge, four oil heat exchangers (3 x 1,000kW, 1 x 600kW) are available per oil unit. There are two oil filling units for test specimens which have their own oil reservoir with a capacity of 24,000 litres each. In total RENK stores about 100,000 litres of oil at its test facility.

The cooling systems also require vast volumes of water. At present, the available cooling capacity is 8MW which, if and when needed, can be raised to 12MW. Added to this are three refrigeration units with a capacity of 600 KW each, by means of which the oil temperature of the hydraulic systems can be lowered all year round for special tests. The complete cooling system contains around 300,000 litres of water, distributed by 30 pumps along various circuits for cooling the test specimens, oil units, and other components. The aggregate pumping capacity is 1,450m³/h.

Another essential element of a test facility is the electrical system. The RENK facility has 10 motors in total which also work as (bi-directional) generators. Configured adjustably, they can also operate in test combinations.

From high torque to high-speed transmission: covering an area of 1,250m², RENK claims its test beds feature state-of-the-art mechanical equipment throughout to allow the testing of even complex and bulky drive and propulsion systems, with very little assembly and set-up time required and equally uncomplicated dismantling of the system elements. Crane capacities of 200t make sure that assembly/dismantling work can be carried out quickly from start to finish.

Christian Bechtel, test bed manager said: “The unique characteristic of this multifunctional test facility is that we literally have a lot to offer in the 4 assets: A lot of oil, water, electrics and the perfect mechanics. All of these features benefits to our customers when they thoroughly test their propulsion systems and components even before installing them. Especially at full load.”

The multifunctional test facility can test a variety of parameters at different loads. The facilities are designed so that gearboxes as well as complete propulsion systems can be put through their paces. The company concludes that tests at the RENK test facility translate into significant savings in time and costs during the implantation of propulsion systems or their components.

RENK is probably best known to the readers of these pages for its Advanced Electric Drive (AED). The company claims that the drive from the Augsburg plant offers a number of special advantages for shipbuilders. The propulsion system is a real alternative to the heavy, space consuming electric motors which are rotating at propeller speed.

Modern power electronics allow the use of high speed motors in combination with an efficient gearbox. The RENK AED combines electric motor and gearbox on one joint frame. Built on soft elastic mounts and equipped with a highly elastic propulsion coupling an incomparably silent operation is possible. The water-jacket of the water-cooled electric motor as well as the double helical reduction gear add to extremely low noise operation.

Thanks to the compact design as well as the low height the preassembled unit is quickly installed with minimum space requirements. Additionally, there is a considerable weight advantage. RENK says the drive weighs around 40% less than a conventional direct drive motor. In this way the RENK AED weighs only 23t instead of the 35t of a direct drive motor of the same power.

Suitable for fixed pitch propellers as well as controllable pitch propellers the drive speed can be flexibly adjusted to the respective propeller requirements. The propulsion systems is built modularly and can be delivered in 4 sizes from 1.4 to 6 megawatt. For uses where the requirements are between sizes RENK simply adjusts the capacity of the bigger engine. In this way the complete range of capacities can be covered individually and economically. The motors work with low or mid ranged voltage and are designed –depending on size- for propeller revolutions of 190-450 rpm.

With these properties the company says that the propulsion system is the perfect drive solution for mega yachts, research vessels, fishery protection vessels or work vessels like cable or pipe layer vessels. 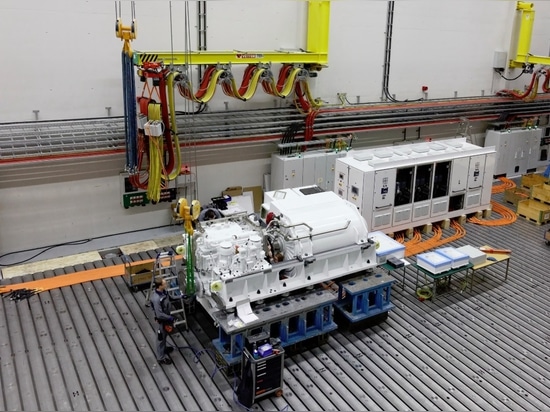 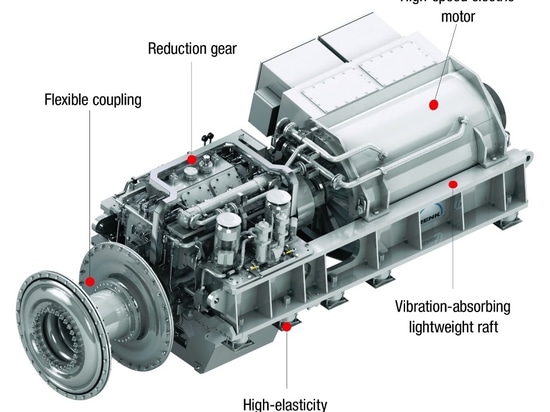 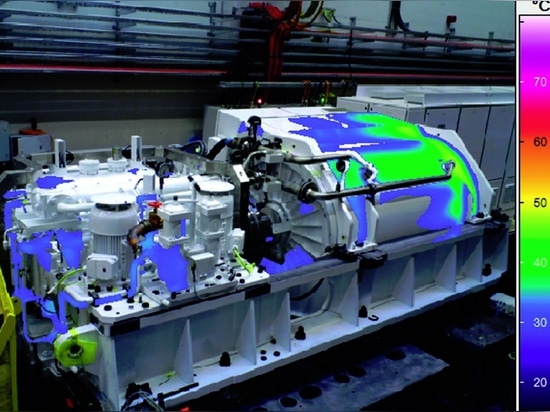