The golf world is mourning the loss of Arnold Palmer, but the Coast Guard community also lost a valuable ally when the former golf great died last week at age 87.

Palmer, who enlisted in the Coast Guard as a yeoman in 1950, served until 1953 before turning his full attention to professional golf. (The Coast Guard had allowed Palmer to continue to play during his service, and he participated in many matches during the three-year period.) The first golfer to win the Masters four times, Palmer is widely regarded as one of the greatest players in the history of the sport. He won seven major championships and had 62 PGA tour victories over the course of his career.

“It was more than his scoring and shotmaking that captivated the sports world,” Dave Anderson wrote in Palmer’s New York Times obituary. “It was how he played. He did not so much navigate a course as attack it. If his swing was not classic, it was ferocious: He seemed to throw all 185 pounds of his muscular 5-foot-10 body at the ball. If he did not win, he at least lost with flair.”

Palmer remained committed to the Coast Guard throughout his life. He entered the service shaken after the death of his Wake Forest University roommate and friend Bud Worsham.

“I was at Wake Forest for three and a half years and my roommate got killed in an automobile accident,” Palmer said in a 2012 interview with U.S. Coast Guard Auxiliary historian Richard A. Stephenson. “I was pretty distraught over that and decided that I needed to get away — I joined the Coast Guard.”

Palmer has credited his time in the service with rekindling his love of golf and setting up his professional success later in life.

“The knowledge that I gained, the maturity that I gained in the Coast Guard was unbelievable,” Palmer told Stephenson in the same 2012 interview. “It matured me — it made me a better person.”

In 2014, Palmer joined the National Coast Guard Museum Association as an honorary chair. In that role, he was instrumental in working with the association’s executive committee and board members to establish the country’s first-ever National Coast Guard Museum in New London, Conn., to honor the commitment, accomplishments, and sacrifices of his fellow Coasties. In 2015, Palmer hosted a successful fundraiser for the museum at his Bay Hill Resort in Orlando, Fla.

“We are saddened to mourn the loss of one of our greatest supporters,” said Richard Grahn, president and CEO of the National Coast Guard Museum Association. “We express our condolences to his wife and family and express our deep gratitude for his steadfast leadership and support of our mission to build the National Coast Guard Museum. Our shipmate has crossed the bar.” 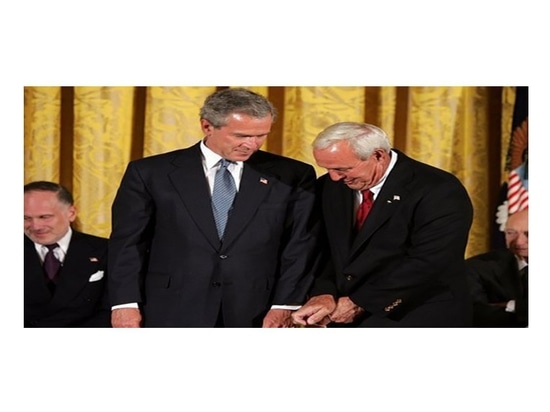 Recipient of the Presidential Medal of Freedom Arnold Palmer compares golf grips with then President George W. Bush before receiving his award in the East Room of the White House on June 23, 2004. White House photo. 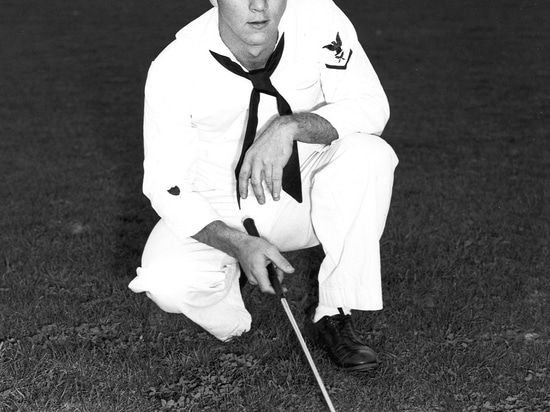