McAllister is a graduate of SUNY Maritime, Throggs Neck, N.Y., where he earned a bachelor’s degree in marine engineering and a U.S. Coast Guard third assistant engineer’s license in 1956, before joining his family’s 152-year-old company. McAllister tugs escort the college training ship Empire State VI on its departures and returns from summer sea term. The company is a major supporter of SUNY Maritime scholarships, and currently employs more than 30 alumni.

“We are delighted to honor Captain McAllister with this degree,” Rear Adm. Michael Alfultis, SUNY Maritime’s president, said in announcing the award. “He has consistently been an advocate for our college and our students.”

After graduating from SUNY Maritime, McAllister served for two years in the Navy, rising to the rank of lieutenant, junior grade and executive officer aboard the landing ship LST 880. Starting in 1959 he worked on McAllister tugboats and ferries, ultimately obtaining a master’s license with unlimited pilotage for many of the ports serviced by the company.

In 1974, he and other members of the fourth generation purchased the company from the third generation of McAllisters. He became president of the company in 1984, the sole owner in 1998, and has been chairman since 2013. Today the company is one of the oldest and most diversified marine towing and transportation companies, operating an extensive fleet of tugs, ferries and barges.

To meet air emission standards and the need to escort larger container ships – including the post-Panamax vessels arriving on the East Coast – McAllister has been building cleaner and more powerful tugboats. The next one will be the Capt. Brian A. McAllister, the first of four 100’x40’, 6,770-hp tugboats under construction at Horizon Shipbuilding Inc., Bayou La Batre, Ala. It will be the first East Coast tugboat to meet EPA Tier 4 emission standards.

McAllister will receive his honorary degree and give the commencement speech when 200 students graduate from the fall 2016 semester.

“I feel truly honored to be awarded such a noble distinction,” he said. “I wasn’t always the best student during my years as a cadet, but from my maritime educational background, which led me to the helm of my family’s company, I hope to have made an imprint on the maritime industry.” 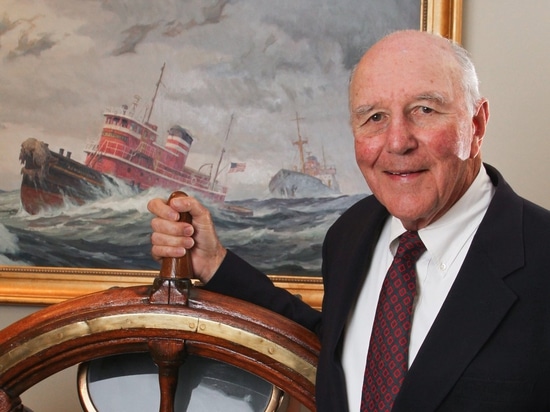