YALE AND BC WIN THE WEEKEND

Yale holds on to the top team racing spot, while the BC women stake their claim in MAISA. On both sides, top ranked teams are gunning for the #1 spot.

We have been waiting all season to see the number one ranked Yale University Bulldogs at work. The wait ended as the 4-time consecutive champion arrived at the US Naval Academy to make their mark on the Graham Hall Team Race, the premier team race event of the spring season.

The Graham Hall is a massive team race regatta, in terms of people sailing and relevance, and is the closest model to what we will see at the National Championship, May 27. The 16-team regatta requires 120 races to complete just the first round. This edition of the event featured a full round robin, followed by a top-6 and a 3 team sail-off to find the winner. While, after 22 races sailed and a 17-5 overall record, the defending champion, #1 Yale came away with the win, the margin could not have been closer. Showing grit, the Bulldogs went 2-0 in a 3-way tie breaker between #3 Georgetown and #5 Boston College to discern the eventual winner.

“The winning team [only] won 75% of their races,” said senior Skipper, Ian Barrows. “That shows how deep the competition was at the regatta.” Mr. Barrows is a College Sailor of the Year Finalist, 3-time All-American, 3-time Team Race Champion, 3-time National Division Winner and a 2-time Fleet Race Champion. Barrows will take control of any team race in which he is sailing. He is the part of a Yale Sailing culture that has produced a long line of great sailors who characterize what is great about college sailing.

Yale finished 14-1 in races sailed against opponents from MAISA and SAISA but were 3-4 against teams from NEISA, the conference Yale will have to qualify out of in 3 weeks.

“The best thing about the event was the nice breeze and excellent race committee that allowed us to get a lot of races in,” said Zachary Leonard, head coach at Yale. “That is all we can ask for at an early season event. There were a lot of strong teams at the event is nearly every race was a battle.”

Coach Leonard seems to be at ease after the tight win. Returning 5 of 6 starters from last year’s championship team and flush with talent, this team is still the presumptive favorite. However, the Fowle Trophy, NEISA’s Team Race Championship is a notoriously tough event, especially this year as it will be hosted by Tufts, where, on Mystic Lake, anything can happen.

The #3 ranked Georgetown University Hoyas continues to impress despite a drastically different starting lineup from last year’s final-four team. The “new” squad is establishing chemistry to compliment skill as they’ve now finished top-2 in all three interconference team races in which they have competed. The Hoyas finished part of the 3-way tie between Yale and BC- losing to Yale but defeating Boston College.

Boston College finished third due to the tie-breaker, but it is clear this group is elite and a legitimate contender for this year’s team race crown. A team that often depends on excellent speed and boat handling, the Eagle should be trending up as the season progresses once they shake of the early-spring rust.

In women’s sailing, the number five ranked Boston College Eagles won the St. Mary's Women's Interconference. With 150 points after 13 races in each division, the Eagles passed the William Smith Herons after race 5B and were able to hold off the rest of the competition throughout the event. Senior Allyson Donahue, sailing with Alice Bohan (‘18) and Tara Ferraris (‘19), won A-Division with 64 points for the Eagles.

“We avoided distractions and stayed focused on the things we could control,” said Boston College Head Coach Greg Wilkenson. “Toughness was a team theme for the weekend,” continued Wilkenson. “One of our sailors was quite sick and told the team she could perform anyway and she did. That helped keep the whole team focus.

The Southern New England Team Race was a one day regatta, characteristic to sailing in New England thus far this year. After 14 races, the #20 Roger Williams Hawks tied the Connecticut College Camels and won in a tie-breaker on total points.

“Fresh off spring break, we were executed a lot of the things we practiced throughout the week, and that was really great to see. It was also good to be put in a must-win scenario going into the last race,” said Roger Williams coach Amanda Callahan

“The conditions at Conn were great for team racing, it was shifty and light with some nice puffs, with flat water and not as much current as they sometimes have,” continued Callahan. “The RC managed to get two flights in on Saturday which was great given the super windy forecast on Sunday.” 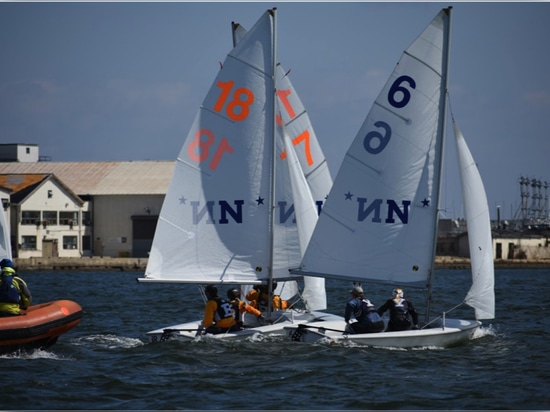 The Graham Hall Team Race hosted by the US Naval Academy.