In a repeat of Races and 1 and 2, Emirates Team New Zealand pummels Oracle Team USA on every leg of every race, leaving the defending helmsman reeling and searching for answers.

By the time Jimmy Spithill exited the press conference this evening in Bermuda you could practically see the grill marks across his face. When you’re the defending helmsman and you lose four straight to a feisty and dominant New Zealand newcomer, you better have answers. On racecourse, the Americans had none, but in the press conference, Spithill had one: “Everything will be put on the table."

And as he reminded the press several times, his Oracle Team USA juggernaut now has five days to find solutions to their undeniable boatspeed deficit: Foils, wings, control systems, techniques, you name it, they’ll be looking at it, “24 hours.”

Emirates Team New Zealand, meanwhile sits perched happily in the catbird seat, ever confident in the technology and sophistication hidden within its platform. But they too will be actively tweaking their boat for a little more speed, which can only tweak the psyche of their rivals who saw nothing but transoms all day.

For Oracle, the hour of misery on Great Sound began in the final seconds before the start of Race 3 of the series. Unable to get a hook in the prestart and seemingly out of sorts with their communications, they let the Kiwis get away – mistake No. 1 – and as they sped down the reach leg, even their asymmetric foil set up (sources say they had a high-speed foil in the port hull only) made no difference. The New Zealanders simply soaked down onto their line and left them in trail of wing wash.

Matching jibes from the first boundary, Oracle touched down ever slightly, springing the New Zealanders. Repeating the pattern of Races 1 and 2 of the previous day, Team New Zealand sprinted away with a lower and faster angle in to Gate 2, rounding the left mark while Oracle split right (looking downwind), New Zealand a good 3 knots faster from the exit.

As the Kiwis stuck a loose cover up the beat, Oracle’s woes were compounded when their onboard instruments and communications went on fritz, leaving them sailing virtually blind, save for race-supplied racecourse data. Any racing sailor knows how critical instruments, can be, especially when it comes to critical fractions of knots, and although Spithill said it didn’t cost them the race, it would be a moot point anyway because the Kiwis continued to pile on their lead.

There’s was no way Oracle could get past them, especially with Kiwis demonstrating uninterrupted flight and flawless boathandling. NBC broadcast commentator Ken Read pointed out at this point in the race: “When ahead, Team New Zealand has never been passed.”

In instantaneous bursts Team New Zealand were a good 2 to 5 knots faster at times and the cyclors' heart rates were happily beating along at normal levels. As the handles spun on Oracle you could practically hear the desperation amid the calls to “dig in” for more oil.And by the time the boats got around Gate 3 the real estate between them was pushing 300-plus meters, and then 500. At Gate 5 the New Zealanders added a few more hundred to that, and that, as they say, was that.

All that Mr. Spithill could offer in his post-race interview was, “We thought we’d be able to roll them sooner” on the reach leg to Mark 1.

In the second race of the day, in 10 knots of wind, the New Zealanders were momentarily vulnerable in the pre-start after a bad jibe. Oracle wanted the hook but didn’t get it. Instead, they got slow and the Kiwis got faster, “a lot faster,” tactician Tom Slingsby noted to his helmsman.

With a clear start again Peter Burling and Co. were off and running, Mr. Spithill following in his wash. Emirates jibed away first at the boundary and Oracle followed in their line, struggling to match the New Zealander’s speed down the run and jibing for the right-hand mark, hoping a split would put them back into the race.

It wasn’t to be. Commanding the race from the middle of the course and covering tack for tack, the New Zealanders promptly stretched their lead to nearly 400 meters. In the interest of getting to the point of a race that was no race at all, by the time the Kiwis flew through Gate 5 their lead had built to nearly 900 meters.

That’s about a half-mile of hurt. 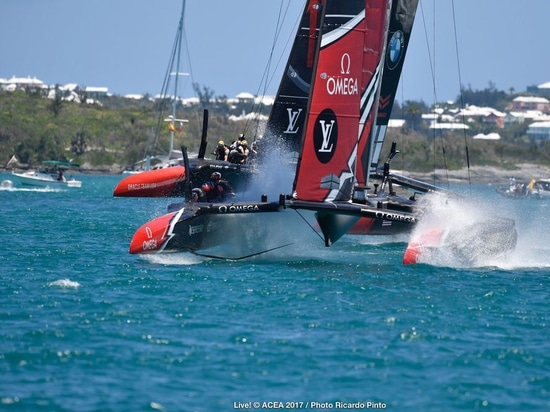 An all too familiar sight on Bermuda's Great Sound: Emirates Team New Zealand leading into Mark 1, this time in Race 3. 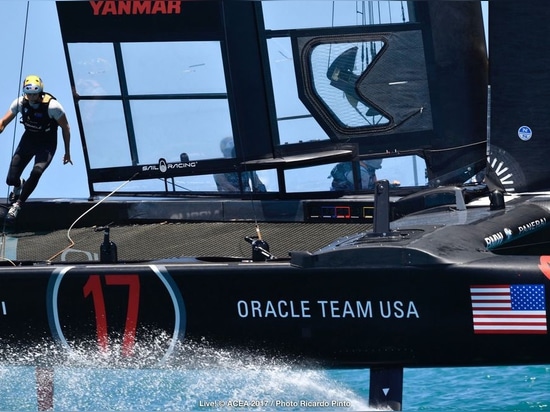 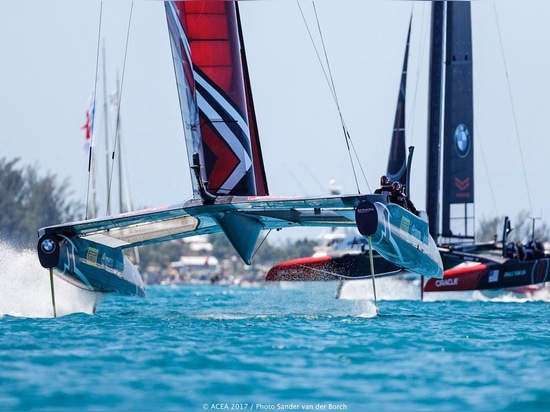