With the final races of the semifinal approaching, two teams are in a heated battle for the playoffs.

Nathan Outteridge and Dean Barker entered the day in very different positions; the former facing the very real prospect of his Artemis Racing team facing elimination from the 35th America’s Cup and the latter standing on the verge of his SoftBank Team Japan making history for Japan by seeing a Japanese team reach the Louis Vuitton America’s Cup Challenger Playoffs Finals for the first time ever.

However, facing a 3-1 deficit following back-to-back defeats on Tuesday, Nathan Outteridge and Artemis Racing mounted an almighty comeback against their Japanese rivals, Dean Barker’s SoftBank Team Japan, winning three races on the trot to take the score in their Louis Vuitton America’s Cup Challenger Playoffs Semi-Finals to 4-3. That scoreline means the two teams will race again on Friday to decide the second Finalist.

“It was an awesome day for us and I’m incredibly proud of everybody involved in our team,” said Artemis Racing helmsman Nathan Outteridge.“We had an incredibly tough day on Tuesday and so as a team we looked back at what we had to do better. I think everyone saw not only an improved boat but a much needed improved performance from us as sailors.

“We were not particularly nervous heading into today. We know it could have been our potential exit today but we were all quietly confident.

“We could have lost confidence in the boat after Tuesday but everyone dug in deep and I’m just proud of what we achieved today.

“We went back to basics and it just showed how easy it can be to win races again.The aim is to do the same tomorrow and take another step towards winning the America’s Cup.”

“It was obviously a very disappointing day but everyone is remaining positive,” said a determined Barker.

“It's never ideal to lose three races in a day and it is frustrating for everyone but we take a lot of heart from today into tomorrow.

“Small errors cost us today but we know we are still right in this contest and it will not take a lot to go out and win tomorrow.

“We are two very even teams and although we had a disappointing day, we will take all of our positive energy into tomorrow.”

Ahead of their first duel of the day, Nathan Outteridge knew that a repeat of Tuesday’s two defeats to SoftBank Team Japan would see them eliminated from the 35th America’s Cup.However, it was SoftBank Team Japan who, despite leading their Semi-Final 3-1, showed early nerves in the two teams’ first encounter of the day as the Japanese team were handed a penalty for crossing the start line a fraction too soon.

That mistake handed Nathan Outteridge the advantage and it was one he took full advantage of, taking the lead and staying ahead throughout the entire race.

SoftBank Team Japan remained in hot pursuit of their rivals but there was ultimately nothing they could do. A faultless performance from Outteridge and Artemis Racing saw the Swedish team seal a 39 second victory and reduce the deficit in their fight to stay in the 35th America’s Cup to 3-2.

Artemis Racing then built on that opening victory and levelled the scores against SoftBank Team Japan with a second successive victory.

Just as they had in the two teams’ opening encounter on Thursday, Artemis Racing timed their approach to the start line to perfection and took an early lead.

In stark contrast to Tuesday’s poor performance, Nathan Outteridge and his team looked assured throughout the race, maintaining a slender lead over the pursuing SoftBank Team Japan.

While Barker sailed an almost faultless race, Artemis Racing did not make the mistake the Japanese team would have been hoping for and Nathan Outteridge steered his team home with a 28 second victory, levelling the scores at 3-3 ahead of the teams’ third and final battle of the day.

Having won both of the day’s previous battles, Nathan Outteridge made it a hat-trick of victories in the last race of the day, turning a 3-1 deficit at the start of Thursday into a 4-3 lead at the end of the day.

Dean Barker narrowly won the pre-start battle, SoftBank Team Japan stealing an early march over Nathan Outteridge’s Artemis Racing. However, the Swedish team battled back over the first four legs of the race and closed the gap completely heading into the pivotal and dramatic Gate 5 turn.

The two teams came into the mark and, in a dramatic flashpoint moment, almost touched, the result of which was a penalty handed to SoftBank Team Japan.

It was a decision from the America’s Cup Race Management umpires that was to prove critical as Artemis Racing seized the advantage to race clear and cross the finish line well ahead of their rivals, sealing a third consecutive victory on the day. 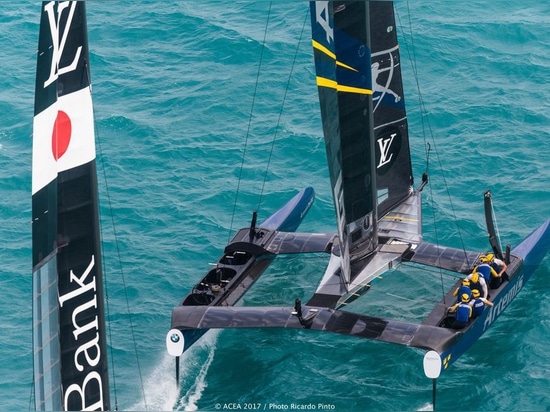 Artemis Racing staged a come back from a 3-1 deficit, shifting the balance in their favor, 4-3/ 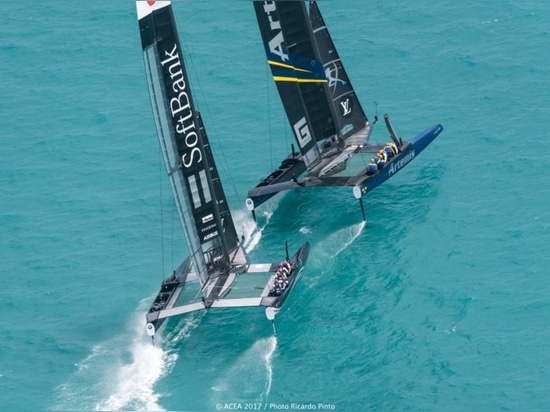