High in the mountains of Norway, endurance snowkite racing takes sailing to a different level and tests skills, tactics, and perseverance.

Nick Levi is standing on skis, a harness around his torso attached to 82 feet of line pulling against a 53 square-foot kite bobbing above his head. His legs are tensed, ready to spring forward and load the kite at the sound of the start horn. He is laser-focused down the course ahead, where the first of five rounding marks awaits. If he can make it to the first gate early, he’ll have a major advantage over the competitors behind him. The race is all about the first 500 yards.

The one-minute horn sounds, and the flag comes down. “Everyone is standing still, and at the last minute you start moving toward the start,” says Levi. “The first time I did it I was scared, looking at all those kites thinking ‘you can’t fly that many kites in the same place.’ I had no idea what was going to happen.” As the final horn sounds, Levi shifts his kite and crosses a blue line painted on the snow, gliding across the expansive white plateau.

Amidst chaos of 250 kites funneling down a narrow stretch of the course, Levi carefully negotiates the pack and rounds the first mark, his edges digging into the snow as he banks left. Without incident, Levi takes off to the second mark in good position, but he still has a long way to go.

Levi is racing in the Red Bull Ragnarok, a 65-kilometer race across Norway’s  Hardangervidda Plateau. With ravines, drifts, rocks, and hills dotting the course, this race is not for the novice kiter. Only a small percentage of those who start complete the race each year.

Racers have to sail a total of five laps around the course in the shortest amount of time. Skiers and snowboarders compete side by side, with all participants crossing the start line simultaneously. Everyone carries a GPS tracker that relays their progress to the officials, who watch to make sure each competitor passes all five gates, all five laps. As Levi continues down the course, the pack thins out. By the end of the day, only 40 of the competitors cross the finish line.

In this edition of the Ragnarok, Levi is the top-finishing American (ninth), and he already plans to return in 2015. “I’m certainly hoping I can do better in the next race,” he says. “As long as I can get through it without a mishap, I have no doubt I can place higher.”

He’s referring to an incident when a fellow competitor landed on top of him on one of the most challenging parts of the course. “They wanted to make it more difficult [this year], so they added a very steep portion of the track where you had to choose to ski or fly down. I chose to ski, but the woman behind me chose to fly and when she lost control of her kite, she crashed hers into mine and took us both down.” The time it took Levi to recover from the crash and untangle his lines, he believes, cost him a higher finishing place.

Like sailing, kitesurfing and snowkiting have numerous subcultures of their sport based on equipment and environment. On the water, kitesurfers can choose between different kinds of boards and sails, including foiling boards, which are relatively new to the sport. On the snow, the choice is about the style of kite more so than the style of board. Snowkiters choose between snowboards and skis, based on their preference, but the real art is in choosing between the freestyle and racing kite.

Freestyle kiters, with flexibility in design and structure of their kite, are able to ‘play’ with the terrain more easily, and in many races are able to take shortcuts over obstacles that racing kites wouldn’t be able to handle. Many racers in the Ragnarok favor the freestyle design, though Levi points out that a successful race is more about the athlete’s endurance than equipment. “You have to prepare year-round for these kind of events,” he explains. “In some longer races, even survival training is key because you’re out on your own for hours in the wilderness.”

A dentist by day, Levi began kitesurfing in 1999 and made the switch to frozen terrain during a mountain trip with friends in 2005. “I used to ski race, so the transition was obvious,” he says. “If you already know how to ski, I can teach you to control a snow kite in half an hour.”

Nine years into his snowkiting career, he finishes the 2014 Ragnarok in under three hours, less than an hour behind the leader, Dominik Zimmerman, of Germany. The race is his second, and Levi notes how much larger the sport is in Europe than in the United States. “The level of competition over there is just amazing,” he says.

With the World Ice and Snow Sailing Association hosting its world championship in Wisconsin in 2015, the sport may add to its American ranks. “We hope a lot of the water guys may make the transition over to snow this year,” says Levi. “Most of the equipment is built for crossing over. I hope we can get something off the ground here.”

“I was inspired to go to the Ragnarok years ago when I saw a picture of hundreds of kites all flying together along the plateau for the start of the race,” says Levi. “Being there, and seeing it in person was even more amazing.” 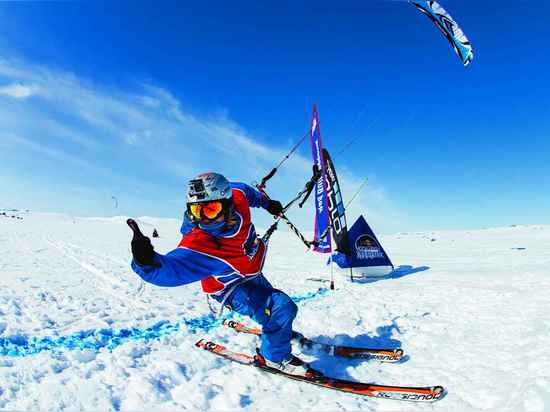 Alex Robin travelled from France for the 2014 Ragnarok. Like many his fellow competitors, Robin struggled with light air on the first lap. Many kiters resorted to walking parts of the course and carrying their equipment. 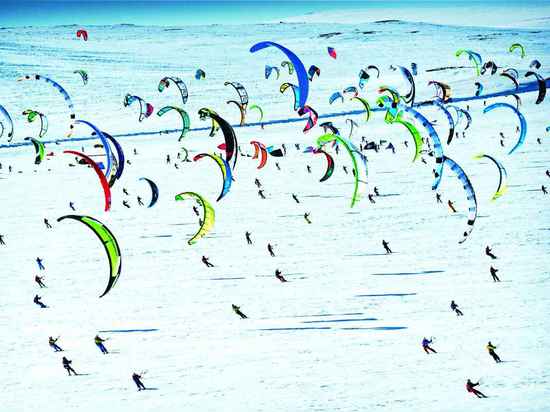 The Red Bull Ragnarok, a snowkite endurance race, bears the name of a Norse myth describing the ultimate battle between the good and evil gods in which only the heroes survived. In the same spirit, the race is so difficult that less than a quarter of competitors finish the course.