Though lower than last year, the official count of deaths among migrants and refugees attempting to reach Europe via the Mediterranean remains extremely high.

IOM, the UN Migration Agency, yesterday released figures for 2017 through July 23 that showed the death toll as reaching 2,361. Although this figure is lower than the 3,047 deaths recorded at this time last year, it nonetheless marks the fourth consecutive year migrant deaths on the Mediterranean Sea have exceeded 2,350.

The number of migrants and refugees entering Europe by sea in the period was 112,018, compared with 250,586 arrivals in the same period last year. Italy continues to be the European country most impacted by the crisis, with almost 85 percent of this year's arrivals entering there with the remainder divided between Greece, Cyprus and Spain.

The decline in the numbers of migrants arriving in Europe may in some part be due to EUNAVFOR MED Operation Sophia, launched by the EU in June 2015, as part of what the EU' calls "a comprehensive approach to help better manage irregular migration and disrupt traffickers and smugglers' networks.

Yesterday, the European Council extended the mandate of Operation Sophia until December 31, 2018

The operation entered its active phase in October 2015 enabling the identification, capture and disposal of vessels used or suspected of being used by migrant smugglers or traffickers. The EU says that since then, the operation has contributed to the arrest and transfer to the Italian authorities of 110 suspected smugglers and traffickers, and has neutralized 470 vessels. In addition, it claims that the operation has helped rescue close to 40,000 people.

Part of Operation Sophia's mandate is to shore up the Libyan Coastguard and navy in not only refugee rescue efforts but also in enforcement of the UN arms embargo on the high seas off the coast of Libya.

Amnesty International has been critical of this initiative. In a report issued earlier this year it charged that "the conditions in which refugees and migrants have been made to cross the sea have deteriorated. Partly in response to EU-led efforts to disrupt their activities, smugglers in Libya have been loading more people onto boats of a lesser quality, mostly inflatable rubber ones, with insufficient fuel, no lifejackets or other safety features, and often with no means to call for help, such as a satellite phone. These boats have virtually no chance of reaching European coasts by themselves and they are in need of rescue from the moment they depart."

Adding yet another strand of complexity to the program i the role that non-governmental humanitarian organizations should play. There have been charges that the activities of some of these agencies amount to collusion with people smugglers, or that they act as a "pull factor" encouraging migrants to attempt the Mediterranean crossing.

Italy is reportedly planning to introduce a code of conduct for NGOs that would bar them from entering Libyan territorial waters, put limits on their communication with migrant boats, and encouraging them to coordinate more closely with the Italian coast guard. Non-Italian boats failing to comply with these guidelines would no longer be allowed to dock in Italy. 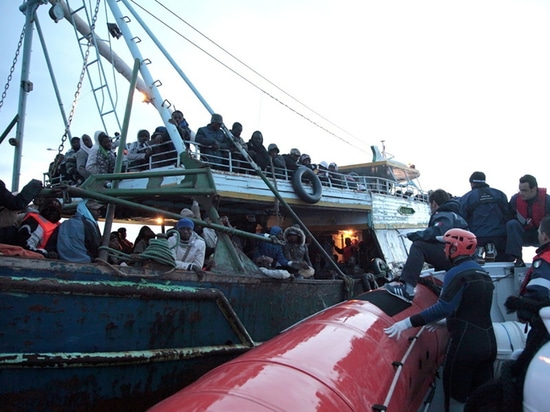