Johnny Heineken is one of the forces behind the burgeoning foil-racing scene on San Francisco Bay.

“I was in this cloud of birds and all I could hear was chirping—it was super trippy,” kiteboard world champion Johnny Heineken recalls of one of the first times he foiled on a kiteboard under the Golden Gate bridge—a bizarre experience in a silent world that spoke to the uniqueness of this kiteboarding progression.

“On any other board I’d be pounding and slapping, worrying about the next wave. Foiling changes how you deal with the water and waves because you really aren’t touching the surface of the water anymore.”

Kiteboarding is known for its diversity—you can ride waves, race, snowkite, and now foil, which Heineken says is just another extension of the sport. “There are always going to be people playing with new technology and taking it to the next level.”

Kiteboard foiling has been around for a long while but has become more accessible in the past several years as equipment has evolved and the myth that it’s insanely difficult to learn has been assuaged. “Almost anyone can do it,” Heineken adds with a sly smile.

The foil under the kiteboard works like any other hydrofoiling craft; for as much force that the foil pushes down on the water, the water pushes back on the foil. The resulting resistive force supports the weight of the board on the foil.

Once in the water, you get up on the foil almost immediately if you have speed. “Dive the kite and once you have some speed, pump your back foot until you pop up on the foil, then lean your weight forward,” Heineken instructs.

Success comes after mastering subtleties like managing weight and balance on a single point on the board and getting in touch with heel-toe/fore-aft pressure. There are no wand or trim-tabs on the foil—like on a Moth, where the boat itself adapts to the waves.

Heineken hopes foil-racing will ultimately parallel the course-racing scene that’s already huge on San Francisco Bay—his home waters and North America’s kiting hot spot—but he thinks foiling would be best served to grow as a development class like the Moth.

“It’ll be much better for the sport than a really constricted and even more expensive Olympic class that caters to some people who are really good with no one else wanting to do it,” Heineken states frankly.

“ISAF is trying to change the kite race format again to create a different parallel class to course racing with a short course format, which we’re not keen on. I hope they’re not biding their time and waiting for foiling to become developed enough to snatch it up right at the end.” 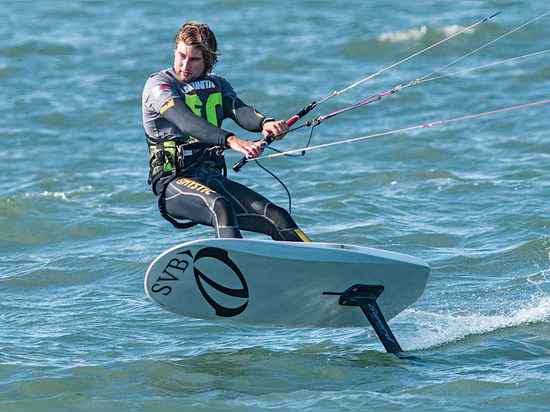 “I’m leaning forward and at the edge of control because everything’s so twitchy when you’re going that fast with too much power.”