Adm. Paul Zukunft stepped down as Coast Guard commandant Friday, ending a four-year tenure. While at the helm, Zukunft increased the pace of rebuilding of the Coast Guard fleet and convinced the White House and Congress on the need for improved funding.

Zukunft retired after 41 years with the service. The new commandant is Adm. Karl Schultz, the Coast Guard Atlantic Area commander who led the response to 2017 hurricanes in Texas, Florida, Puerto Rico and the U.S. Virgin Islands.

In a ceremony at Coast Guard headquarters in Washington, D.C., President Donald Trump credited Zukunft with building an anti-drug trafficking alliance of the Americas, and educating Washington policymakers on the need for more ships and new polar icebreakers.

The administration drew fire in its first months of 2017, when budget officials floated possible cuts to the Coast Guard budget, only to be swiftly shot down by the service’s supporters on Capitol Hill.

“Paul sharpened the Coast Guard’s focus on the Western Hemisphere, a crucial legacy that will long outlive Paul’s tenure,” said Trump. “This includes greater emphasis on drug interdiction, and the formation of historic partnerships to stop this deadly poison — and that’s what it is, it’s poison — from reaching our shores and destroying our youth and others.

“Paul also worked tirelessly to protect America’s interests in the Arctic. His leadership helped launch the Arctic Coast Guard Forum, and he made a top priority to ensure that the United States military can project American might all the way to the poles.

“One of the first times I met the admiral last year, I asked him, ‘What do you need?’ He replied, ‘Sir, we need icebreakers and we need them badly.’ Well, now you’re getting them,” Trump said to applause. “And to be specific, I’m pleased to report that the Coast Guard is now on course to receive its first new heavy icebreaker in more than 40 years, and plenty other ships, and boats, and equipment, and everything you need.”

Zukunft worked to break the longstanding pattern of underfunding the Coast Guard. Doing “more with less” has long been a credo and point of pride with the service, but Zukunft reasoned with administration officials and lawmakers that it was counterproductive and not in the national interest, with growing challenges policing the ocean for drug and human trafficking, fisheries enforcement and the opening of Arctic seaways.

This year the Coast Guard got its biggest share ever of the $700 billion defense appropriations for fiscal year 2018.

“Truly, Mr. President, you honor the men and women of the United States Coast Guard serving around the world today as 2018 was the largest appropriation ever for the Coast Guard,” said Zukunft. “But it’s not about the money or the platforms, it’s the people who serve in them. The work they do could not be more relevant. We couldn’t do our job without them.”

“The Coast Guard remains a service that is trusted, respected, and valued by our citizens because of the tremendous leadership of Admiral Zukunft,” Schultz said of the outgoing commandant. “To Admiral Zukunft and Mrs. Fran DeNinno-Zukunft, we salute and congratulate them on a remarkably successful tour as our 25th commandant. 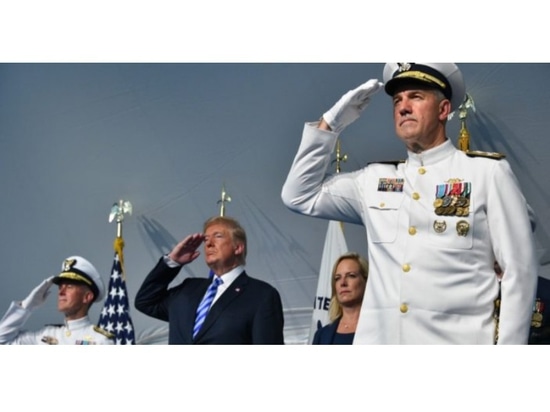 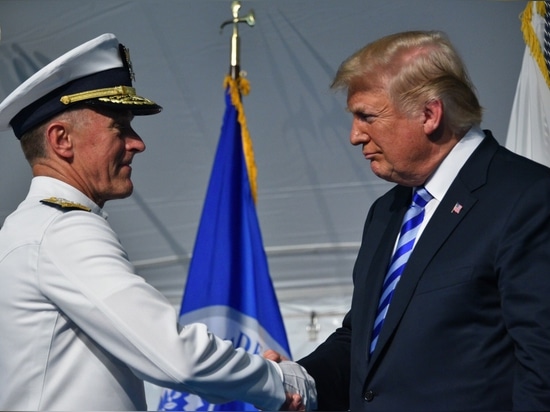