Built in 2008, after 14 years with the Nissan Motor Company, Stephane Schwarz stepped down from his high-powered position as Design Director of Nissan Design UK to set up his own consultancy firm.

One of the first non-automotive designs to come out of his London-based studio is the Ikko 125m concept project. Described as "a counter proposal to the current market trend", the 125m has four deck levels shaped around the interface between man, machine and the environment with an upper deck saloon that offers 350 degree sightlines (including transparent flooring) topped by an innovative heli-deck. Other futuristic features include spray-on solar cells to power hotel appliances and equipment and computer networks to automate or remotely control domestic tasks, which could mean a smaller crew. It would be easy to dismiss this project as fanciful if it weren't for the involvement of BMT Nigel Gee, one of the word's leading marine design consultancies based in Southampton, and more especially their patented pentamaran hull configuration. Originally developed for the fast ferry market, the pentamaran is a slender monohull stabilised by two pairs of outriggers or 'sponsons' which offers the potential for a 30% reduction in power in large high-speed vessels when compared with existing monohulls or catamarans. This reduction in power has the added benefit of being able to burn cheaper fuel: historically IFO 380 fuel has been about half the price of marine diesel oil.

"Walking the dock in various marinas, and Monte Carlo especially, I was struck by the preponderance of bulky, high-volume superyachts", says Stephane Schwarz. "I felt there was an alternative course based on other values such as quality of life and the uniqueness of the yachting experience." Although he collaborated on other yacht projects during time spent with the Pininfarina studio in Italy, the hydro-and aerodynamic Ikko 125 clearly owes a lot to Schwarz's time spent in the automobile industry. "The way light reflects on surfaces is something we deal with on a daily basis in the car industry", he points out. "So with this project I've treated the exterior as a faceted mass to reflect and bounce light."

Initial reactions from the industry have been mixed, praising features such as the full-size heli-deck, but criticising the large swimming pool on the main foredeck. This has not dissuaded Schwarz, who considers the overall design to be "completely realistic". 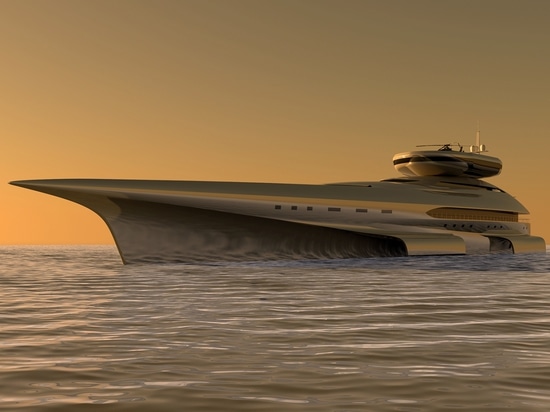