More than 30 years have passed since the Youth Sailing World Championships have been held in the U.S., but if the week continues as it started for Team USA this regatta will long be remembered by the 14 American teenage sailors.

With the blustery southeasterly breeze allowing for the full complement of 23 races scheduled among the nine classes, Team USA leads three classes—the Boys’ RS:X and 420 and Girls’ 420—and is placed second in another—the Girls’ Laser Radial.

No one on the US team shone brighter today than Geronimo Nores (Miami Beach, Fla.), the 18-year-old representative in the Boys’ RS:X Class. Nores won all three races and leads with the low score of 2 points. (Each crew in every class gets to discard its worst finish after three completed races.)

“I’m pretty surprised, it’s very exciting,” said Nores, whose first name is from his Argentinian mother and not a reference to the legendary American Indian. “It was a combination of good wind, being well rested and energized, and sailing well.”Energy has been lacking for Nores in the past year. It was one year ago when he was diagnosed with diabetes while racing in France. It turned out to be such a severe case that he has a canine working dog, a 20-month- yellow Labrador named Luna, by his side at all times to alert him if his blood sugar levels drop to dangerously low levels. Luna even goes on the coach boat to monitor Nores in between races.

“I spent a week in the hospital in France,” said Nores. “This year has been about recovering and getting back to sailing. I’ve had a difficult time competing, being on the water. It’s amazing to see the progress I’ve made pay off on a day like today.”

In the Boys’ 420 Class, JC Hermus (Bellport, N.Y.) and Walter Henry (Syosset, N.Y.) lead by 5 points, but second through 10th are separated by just 7 points. Hermus and Henry started at the windward end in each race and sailed consistently to post a 5-3 on the scoreboard.

“It felt good today,” said Hermus, the skipper who is on leave from the U.S. Naval Academy. “It was pretty fluky, there were some big shifts and some puffs came out of nowhere, so I’m happy for the consistent scores. We were just trying to stay out of the fray and survive the first day.”

“We felt fast on all points of sail,” said Henry, whose father Wally is a past America’s Cup crewman. “We stayed out of trouble and away from the mess of boats when we could. We had a couple of encounters, especially on the downwind legs there were some tight situations. But for the most part we kept our space.”Another sailor happy to get the first day over with was Charlotte Rose (Houston, Texas), the returning gold medalist in the Girls’ Laser Radial Class. Rose is placed second with 5 points on finishes of 4-1, but five minutes into the first race her outlook wasn’t so rosy.

“In the first race I was stuck in the pack off the start line and then tacked to port and hit the South African girl,” said Rose. “I did my penalty circles but was dead last, so I was happy with how I sailed back to fourth.”

Rose came back to win the second race by a comfortable margin and now looks forward to the rest of the week.

“It’s good to get the first day jitters out of the way,” she said.

Chase Carraway (Wrightsville Beach, N.C.) also was happy with his day, calling it a solid performance. Carraway placed 5-14 in the Boys’ Laser Radial Class and holds eighth place, 11 points behind the Argentinian leader.

“It was a pretty solid first day, nothing too crazy happened,” said Carraway. “I was happy with the first start. In the second race I had to send it to the left side for a little bit, but it ended up alright. It was a good start to the week, but I can improve.”

Carmen and Emma Cowles (Larchmont, N.Y.) also had a good start to their week in the Girls’ 420 Class. The reigning gold medalists in the class won both races to pick up where they left off last year. They hold a 4-point lead over a trio of crews from Great Britain, Spain and Switzerland.In the Girls’ 29er Class, the USA’s Berta Puig (Miami, Fla.) and Bella Casaretto (Fort Lauderdale, Fla.) hold fifth place with 7 points, just 4 points off the lead.

In the Nacra 15 Class, Nico Martin and AnaClare Solé (both Houston, Texas) hold sixth place with 10 points after counting a 7-3. They lie 8 points off the German leaders and 5 points behind the third-placed Argentinian crew.

Racing is scheduled to continue tomorrow with 23 races planned among the nine classes. 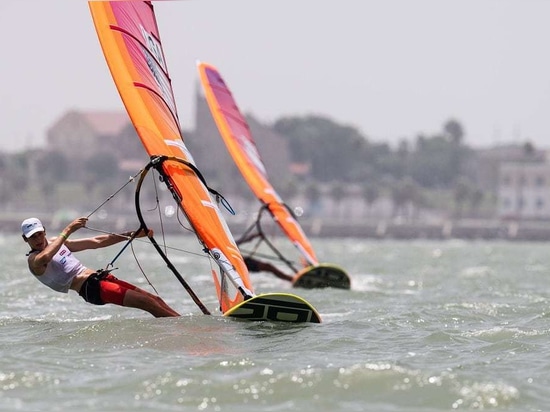 Geronimo Nores won all three races in the Boys' RS:X Class on Day 1 of the Youth Sailing World Championships.