Yards are well placed for increased traffic and bookings

Repairs on tankers calling on the Port of Singapore are primarily undertaken by four yard operating entities in Singapore: Keppel, SembCorp Marine, ST Marine and ASL Marine. Keppel Shipyard alone has undertaken repairs on an average of 400 vessels a year, but the expectation is that 2015 will be a well-above-average year. Keppel operates five drydocks, three of which are capable of taking in VLCCs up to 400,000 dwt.

Singapore remains one of the most important global centres for tanker repairs. This position has been strengthened by the opening of the Sembmarine Integrated Yard, the largest shiprepair facility in Singapore. Located to the west of Singapore at Tuas View Extension, the 206-hectare site is being developed in three phases and represents a key infrastructure investment for the country.

The yard became operational in August 2013. Phase 1 covers just over 73 hectares and leaves the yard capable of serving a wide range of vessel types, including VLCCs. Phase I includes four VLCC-class drydocks, with a total dock capacity of 1.55 million dwt, as well as three finger piers with drafts from 9m to 15m.

The facilities at the new yard include a drydock that measures 360m x 89m x 8.5m, which is the widest drydock in Singapore. Another drydock, measuring 412m in length and 66m in width, with a draft of 11m, is claimed to be the longest and deepest shiprepair drydock in the whole of Asia. It has an innovative intermediate dockgate system that offers Sembcorp greater flexibility to configure the dock, and allow smaller ships to be accommodated in front while other works are carried out at the rear.

Sembcorp Marine has a network of six shipyards in Singapore: Jurong Shipyard, Sembawang Shipyard, SMOE, PPL Shipyard, Jurong SML and now Sembmarine Integrated Yard at Tuas. All five of the previously existing yard operations will be progressively transferred to the new facility, a process that is expected to be completed by 2024. That will allow the company to exploit synergies among shipyard operations and will mean significant economies of scale.

As well as being a leading tanker repair yard, Sembcorp Marine has a thriving tanker-to-FPSO conversion business, which the new yard is expected, eventually, to strengthen still further. The company recently secured a contract to convert two 316,000 dwt VLCC sister ships, Olympia and Antarctica, both previously operated by Euronav, to FPSOs for deployment offshore Angola. Major works that will be carried out by Sembcorp include refurbishment of the VLCCs, construction engineering, the fabrication of the flare stack, helideck, upper turret and access structures, the integration of the topsides modules and lower turret components, and pre-commissioning of the FPSOs. The first VLCC, Olympia, entered Sembawang Shipyard in the third quarter of 2014, while the Antarctica will follow in the first quarter of 2015. The project is expected to take a total of 32 months to complete.

Even with the additional drydocking capacity, ASL Marine executive director Ang Kok Leong believes Keppel and Jurong will avoid head-on competition against the two smaller yard operators, because priorities will be given to repairs of VLCCs over smaller vessels.

ASL, with its three drydocks in Batam, Indonesia (the largest measuring 340 metres by 60 metres), will continue to be well-positioned for repairs of Aframax tankers, Mr Ang says. Operating out of Batam provides ASL access to lower-cost labour in close proximity to the busy port of Singapore. By Mr Ang’s estimate, man-hour cost in Indonesia is easily 15 per cent lower than that in Singapore, although he acknowledges some owners still prefer Singapore over Batam for drydocking of their vessels because there is less red tape.

Besides the potential uptick in crude tanker repairs, Singapore yard operators also stand to benefit from an increasing number of other product tankers calling on the busy port of the island nation. Tanker arrivals measured by gross tonnage at Singapore Port increased to 707 million in 2014, up from 705 million in 2013, due to a higher number of chemical, LNG and LPG carrier arrivals, according to data from Maritime Port Authority. Oil tanker arrivals at Singapore dipped marginally to 555 million gt, down from 568 million gt.

Singapore has long served as the hub for ship services and spare parts, even as manufacturing of such equipment has picked up in China. “In Singapore there are a lot of stockists offering very good prices for even very special equipment,” Mr Ang says. This equipment may not be easily purchased in China, where stockists may not be located close enough to the yard operators. Yard operators often have to grapple with the challenges of having to courier in parts, which translates to time lost on any shiprepair or shipbuilding projects. ASL meets the logistical challenge by storing sizeable volume of spare parts at its Batam yard. Taking into consideration Singapore’s advantages, Mr Ang estimates a shiprepair job done in the island nation could take a few days less than one done in Batam or China. At present, ASL takes an average of 10 days to complete each shiprepair job, he says.

Singapore’s maritime industry has bred niche players, such as thruster and propeller specialist Mencast, often called on to support shiprepair work undertaken by the four leading yard operators. Through its affiliations with equipment manufacturers, Mencast has been commissioned to repair propellers and thrusters not just in Singapore, but also in China and Batam. Mencast senior manager of corporate sales and business development Roy Tan says that owners prefer Singapore-based contractors for equipment repairs. Mr Tan’s observation tied in with a general industry sentiment that Singapore-based contractors tend to possess a stronger service culture than those in China. Yards in China tend to take on more shipbuilding projects, given that the country lies off the major shipping routes. The assembly line culture of the Chinese shipbuilding industry does not necessary breed the project management skills associated with shiprepair work, some industry players opined.

In China, Mr Tan says Mencast has carried out more one-off emergency repairs than the regular maintenance stemming from mandatory drydocking. Mencast has a flying squad of engineers on call 24/7 for such emergency jobs. Vessel owners are generally inclined to fly in Mencast engineers because the service protocols of the Singapore-listed outfit have already been certified by the respective classification societies, Mr Tan explains. Mencast has one plant in Changshu, which manufactures heat exchangers and undertakes repairs.

In Singapore, Mencast is regularly called on for propeller polishing or balancing tied to vessel repair work at the four larger yard operators. By Mr Tan’s estimate, each propeller repair job can take days to complete, while work on thrusters tends to span over a month. Mencast also has about 25 divers on its permanent payroll, and a series of 10- to 34-metre long dive boats that can be called on to support afloat repairs.

While Singapore appears to retain an edge over its Asian neighbours in shiprepair capabilities, it stands to lose out on cost-effectiveness if productivity does not catch up with the projected rise in labour costs as the government clamps down on foreign labour.

Singapore yard operators face fewer difficulties hiring locals to fill supervisory level positions such as senior repairs managers, but foreign labour makes up a large majority of junior staff, Mr Ang points out. The Government of Singapore has expressed the intention of reducing the foreign labour quota down from one Singaporean to five foreigners to one Singaporean to 3.5 foreigners over the next few years.

At Mencast, Mr Tan says, the management is undertaking cross-training of foreign labourers. Foreigners account for over half of Mencast’s 800-strong staff. It is hoped that by encouraging multitasking, Mencast will eventually be able to meet any quotas imposed by the Ministry of Manpower. TST 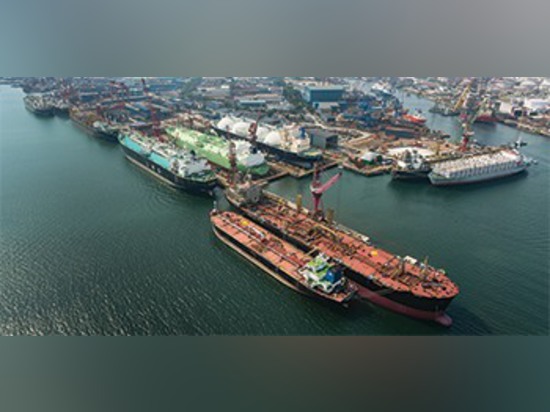