Carolijn Brouwer (NED) / Marie Riou (FRA) and Pavlos Kontides (CYP) were crowned female and male Rolex World Sailors of the Year as the stars of sailing were recognised at the 2018 World Sailing Awards in Sarasota, Florida, USA.

Held at the Van Wezel Performing Arts Hall, eight Awards were presented. The highlight of the Awards is the Rolex World Sailor of the Year Awards and Brouwer / Riou were recognised for their success in the Volvo Ocean Race and Kontides for winning consecutive World Championship titles.

Carolijn Brouwer (NED) and Marie Riou (FRA) became the first female winners of the Volvo Ocean Race in the 2017-18 edition, claiming the title after thousands of gruelling miles at sea.

Ahead of the final race, Dongfeng Race Team's Brouwer and Riou were at the opposite ends of the spectrum. Brouwer was an experienced offshore racer with two Volvo Ocean Race editions completed, whereas Riou was a two-time Olympian in Match Racing and the Nacra 17.

The two came together and worked in unison, making brave and bold decisions when they mattered.

On the winner-takes-all 970-mile drag race from Gothenburg, Sweden to The Hague, The Netherlands, Dongfeng Race Team made the right call to move inshore and take a narrow leg win to seal the Volvo Ocean Race title.

"Being able to say that Marie and I were the first women to win the Volvo Ocean race is a special thing, we are part of history and it's definitely something that will stay forever."

France's Riou added, "I'm feeling great to win this prize tonight, especially with Carolijn. It's a team prize and it was such a great achievement for a year of hard work with the whole team."

Cyprus' Pavlos Kontides is etched into the history books in his home nation, becoming the countries first Olympic medallist at the London 2012 Olympic Games. His success inspired the nation and since then he has continued to inspire nationally and globally with his achievements.

The Laser sailor won his first World Championship title at the 2017 edition in Split, Croatia. Less than one year later he stood atop of the podium yet again. At the 2018 Hempel Sailing World Championships in Aarhus, Denmark he conquered again.

After ten testing races, Kontides faced off against Matt Wearn (AUS) in the Laser Medal Race. Although Kontides finished a place behind the Australian in a tense final duel, he had enough points to give him a two-point victory and a second world title.

Speaking on receiving the Award, Kontides said, "There are lot of great legends of our sport on that trophy. Since I was 14, I've been dreaming of winning that award. I used to write it on lots of pieces of paper that it's what I wanted. Maybe it sounded a bit too far away, maybe it was too big of a dream but here I am today.

"I managed to achieve this from a really small island in the middle of the Mediterranean so I hope this achievement will inspire a lot of other young sailors to prove you should dream big and not be too scared to chase it.

"Impossible is something you only have in your brain. Your brain is the biggest barrier but once you figure it out, it can be your biggest weapon and your biggest ally as well so just dream big and go for it." 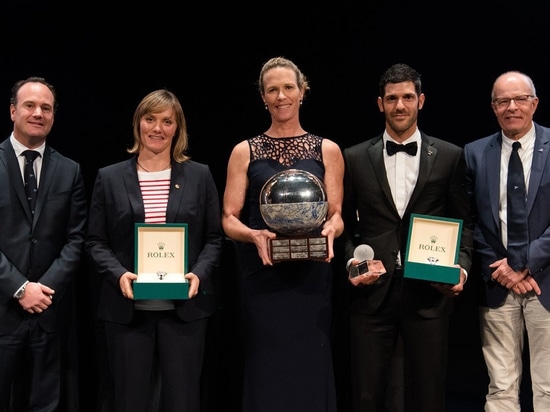