Working in conjunction with Red Funnel, the Isle of Wight ferry company, first trials are set to begin on the ferry operator's high-speed craft RedJet7 in late April 2019. Azurtane's new technology will be capable of positioning vessels within 4cm of a given location, something even the most experienced seafarer would struggle to achieve.

"Governed by a strict timetable, the craft must reach their way points, notional interim destinations, with only a few seconds' leeway if they are to arrive on time," he says. "Achieving that is not as simple as putting your foot down and catching up lost time. That would just add to fuel cost and carbon emissions. The secret is to be aware of the external factors that may delay the ferry such as tides, currents, wind and other vessels in the Solent. Minimizing the fuel burn to each way point is a skill developed over years of command. Azurtane's technology can assist commanders to be even more efficient and furthermore act as a training tool for less experienced officers."

Once at the destination, limiting the time to berth safely is the second critical activity. Unlike a bus, the ferry cannot simply turn the rudder and swing into the stop. Maneuvering relies on significant skill and experience if berthing is to be carried out in the shortest time with minimal fuel burn and no damage to the vessel.

Gregory says the experience of operating the Azurtane positioning system is like flying a drone, with the difference that the commander is on board and in charge. The newly developed tool will allow him or her to know exactly where the vessel is in relation to the wharf down to millimeters in accuracy.

The ambition is to make ferry operations even safer whilst continuously reducing carbon emissions. 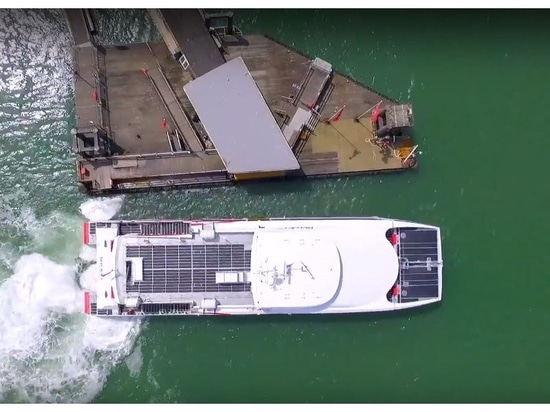