After the success of the inaugural GO Diving Show this past February, the dates have been announced for next year.

The 2020 Go Diving Show will take place February 21st-23rd at the Ricoh Arena in Coventry, UK.

The event will be split across three days, the Friday being trade-only, and two consumer days over the weekend. The trade day will feature break-out rooms for seminars, member forums, etc, and there will be presentations on how to develop and improve your online presence for your dive center/school, utilize social media more effectively, and so on.

As before, there is plenty on offer over the weekend for both existing divers and those looking to get into the sport.

First-timers can take their inaugural fin-steps into the underwater world in a 100-square-meter trydive pool. Additionally, without even getting wet, attendees will be able to sample shark dives, seal dives, wreck dives and cave dives through the magic of Virtual Reality. After being such a hit last year, there’ll even be an actual cave system to explore.

Existing divers are also well catered for at GO Diving, with dedicated sections focusing on the disciplines of Underwater Photography and Technical Diving. Think your trim is up to scratch? Got your S-drills nailed? Navigation in the bag? Come and showcase your abilities at the show’s interactive sessions. Want to try something new? Sign up for a sidemount trydive, or a dive on a closed-circuit rebreather. There’ll even be an area for The Next Generation of divers, all those keen kids and talented teens already attracted to the underwater realm.

New divers or veterans alike will be inspired and entertained by the line-up of speakers, including BBC stars Steve Backshall, Andy Torbet, Miranda Krestovnikoff and Monty Halls, from Beyond Bionic, Deadly 60, The One Show, Undiscovered Worlds, Operation Iceberg, Great Escapes and Wreck Detectives, discussing how they got into diving, what they love about exploring beneath the surface, and hear about some of their underwater adventures.

The Main Stage (sponsored by Aqaba Tourism) — hosted by BBC presenters Andy Torbet and Miranda Krestovnikoff, this will cover everything from all aspects of the world of diving. They will be joined by Steve Backshall, Monty Halls and award-winning underwater photographer Alex Mustard MBE, who will also be unveiling the winners of the prestigious Underwater Photographer of the Year 2020 competition on Saturday afternoon.

The Inspiration Stage — stories to lift your spirits, and drive you on to greater heights in diving, whether that is simply getting your entry-level certification, climbing on to the first rungs of the professional ladder, or some other aspect of diving. Be inspired! Speakers already signed up include PADI Course Director, technical diver and photographer/videographer Luke Inman, technical diver Gemma Smith, and acclaimed UW photographer and conservationist Jorge Hauser. Watch this space for more speakers! 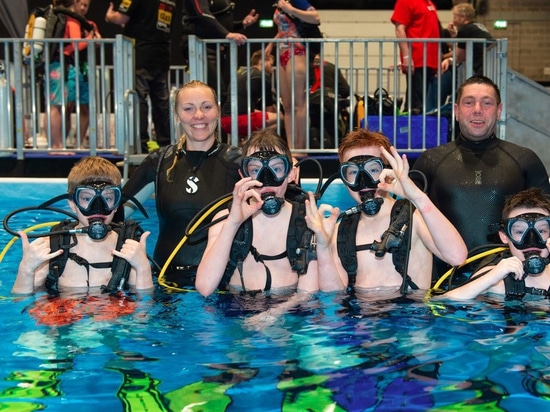