Dutch yard Feadship has revealed that its 77.25 metre superyacht Project 818 has been named Syzygy 818 and begun sea trials.

It comes after the yard live streamed the yacht's launch at its Kaag facility last month.

Feadship also revealed the origins of the yacht's name. The numbers "818" mean "prosperous" in Chinese numerology, while the owner's birthday on August 18 mirrors the significance of these numbers.

The word "syzygy" meanwhile is used in astrology to reference a rare event in which three or more celestial bodies line up, such as a new moon or lunar eclipse.The yard also revealed that it was tasked with overcoming a number of challenges before the owner would commit to commissioning the yacht, which is his first Feadship.

"Glass technology had to evolve to the degree where it could be used in the desired manner in a superstructure and provide the clear lines of vision which the client required," the yard said.

While details about the yacht remain sparse, it is known that Syzygy 818 has been built to a custom design created by the owner with designer Jarkko Jämsén. The interior comes from Sinot Exclusive Yacht Design.

Syzygy 818 also features a beam of 11 metres and is set to be delivered later this year. Built from a steel hull and aluminium superstructure, with three decks, Feadship described the yacht as “elegant and well proportioned”.

KK Superyachts has been representing the owner, from the concept phase to construction.A statement from the yard said: “_Syzygy 818 _will certainly live up to her name, as will be revealed in due course."

It comes after Feadship’s 88.38 metre superyacht Project 816 was moved to the yard’s new Amsterdam facility for completion last month. 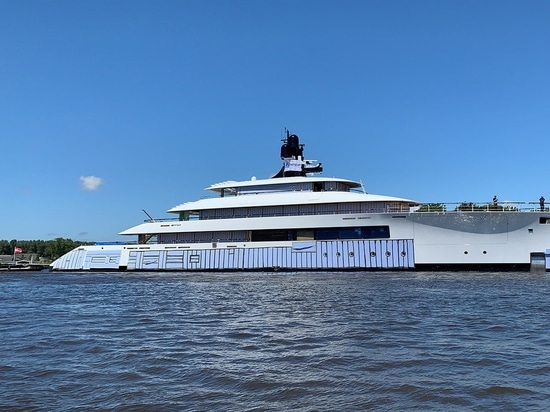 Syzygy 818 after being launched