The 34.4m loa and 10.8m wide RÜM HART was completed at Holland’s Thecla Bodewes (TB) Shipyards on an aluminium hull from Bloemsma . It was named in Wyk on Föhr - the second largest of the North Frisian Islands on the German North Sea coast.

The naming completes a programme of ship replacement by local German island ferry operator Wyker Dampfschiffsreederei Föhr-Amrum (WDR). It got underway in 2010 with the double-ended car and passenger ferry newbuild UTHLANDE and was followed by two more tailor-made sister ferries - NORDERAUE and SCHLESWIG-HOLSTEIN.

All three ships are 75.88m long and the biggest in the current WDR fleet of seven. RÜM HART is the only catamaran so far and also currently the smallest ferry in operation with the WDR fleet. It has now gone into charter with fellow North Frisian island operator, Sylt-based Reederei Adler Schiffe as ADLER RÜM HART.

But before it did, WDR MD Axel Meynköhn had praise for both the ship and its Dutch builders. He said RÜM HART’s sea trials had gone “like clockwork” and added that the 247gt newbuild was “fast and flexible”. Meynköhn said the ship “performed excellently, meeting all the requirements, particularly the speed defined in the building contract”. And he said TB Shipyards had been “brilliant”, adding: “We certainly do not regret awarding this contract to our partners in the Netherlands”.

Carrying a maximum of 250 passengers, the new catamaran has a service speed of 16 knots provided by two Volvo D16MH diesel main engines each of 478kW. Drawing a maximum of just 1.5m, it is tailor-made for the operations of Adler-Schiffe.

Geert Dokter, MD of Conoship International which designed and engineered the newbuild, said: “The main challenge for us was the owner’s request for a service speed of 16 knots in shallow Wadden sea waters, even against the tide. Achieving such a relatively high speed with a small design and a very low draft is not easy”, he declared. 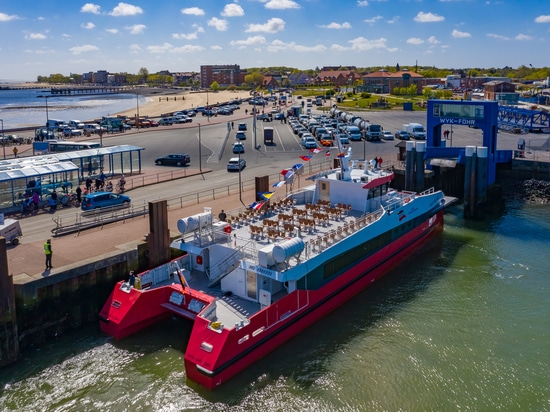