Robotic life on the seabed

A new generation of AUVs will reside in docking stations on the seafloor, autonomously performing maintenance, inspection and survey work

These technologies were on display during a demonstration in June at Sweden’s Lake Vättern, where Saab Seaeye Ltd put its Saab Seaeye Sabertooth AUV through its paces. With the ability to operate fully autonomously or via a tether, Seaeye Sabertooth is a hybrid AUV/ROV, with the capability to operate in 1,200 m of water for a single-hull model and 3,000 m for a double-hull version.

The double-hull version of Seaeye Sabertooth can be based at a remote docking station on the seabed, ready to be launched on pre-programmed or operator-controlled missions, including inspection, repair and maintenance (IRM), subsea installation or survey work. Various tooling packages can be stored at the docking station, batteries can be recharged and data transferred via satellite or cable to shore.

Seaeye Sabertooth can “live” in the docking station for more than six months without maintenance, reducing the need for the deployment of surface vessels, improving efficiency and lowering operational costs for subsea work.

During the demonstration, Saab Seaeye Sabertooth docked at Norway energy firm Equinor’s open-standard subsea docking station (SDS), where it received instructions to perform various autonomous transits to undertake mock inspection tasks and to return to the station for recharging and video data download.

“It is brilliant to see a major advance in the future of the industry come to fruition,” says Saab Seaeye Ltd managing director Jon Robertson. Mr Robertson says that residency is now a deliverable option that will reduce operational expenditure, helping remove humans from offshore and reducing the environmental impact.

Seaeye Sabertooth is fitted with obstacle avoidance sonar for navigating in a 3D map environment, a communication antenna for WiFi, UHF, satellite and GPS communication and a 20 kWh or 30 kWh battery, which provides an endurance of over 14 hours. Fitted with six thrusters, it is highly maneuverable and has a forward speed of 4 knots.

When docked during the demonstration, the AUV was charged and data uploaded and downloaded via the connectors.

Sonardyne’s BlueComm free-space optical modem system provided live video and AUV control during the demonstration, which was run with pre-programmed autonomous route plans. Operators used a touchscreen interface to move the AUV from an automatically held position by set amounts and to manipulate a TMT electric torque tool to a valve panel.

Underwater simultaneous localisation and mapping (UWSLAM) was used to allow the AUV pilot to ‘see’ the environment as a 3D map in real time. The system leaves a ‘snail trail’ which can be used to determine precise vehicle positioning relative to the map and provide effective station-keeping and augmented navigation functions. Saab Seaeye says the 3D point cloud generated by the system has a resolution of one mm, allowing for precise measurement of the size and position of objects.

Depending on the mission, Saab Seaeye Sabertooth can be fitted with a number of payloads, including side-scan sonar, multi-beam sonar, sub-bottom profiles, manipulator arms, torque tools and magnetometer.

More compact electronically-powered observation-class ROV systems, such as Seaeye Tiger, are also available from Saab Seaeye. At 150 kg, Seaeye Tiger is about one-tenth of the weight of the Seaeye Sabertooth; it is rated to 1,000 m, has a 32 kg payload and the capability of either tether in management or free-swimming mode. Fitted with sensors, indicators and cameras, observation-class ROVs are used for routine maintenance inspections of subsea structures and for supplementing work-class operations.

Starting in April, observation-class ROVs such as VideoRay’s Mission Specialist Defender will be fitted with a high-resolution version of Kongsberg Maritime’s Flexview multibeam sonar. Kongsberg Maritime increased the Flexview’s operational frequency range from 500 kHz to between 950 to 1,400 kHz to supply sharper images.

Like the Seaeye Tiger, the VideoRay Mission Specialist Defender ROV is rated to 1,000 m and weighs 17.2 kg. The Defender uses interchangeable, modular components residing on a single, intelligent network. VideoRay says this topology provides an extremely flexible and customisable platform which can be easily adapted for specific missions.

With its modest dimensions, the lightweight Flexview fits into small, observational-class ROVs, which are suitable for applications ranging from site inspection and clearance, marine engineering and underwater science to environmental monitoring or search and rescue assignments.

Offering both Compressed High-Intensity Radar Pulse (CHIRP) and doppler modes of operation to detect subsea objects, the new generation Flexview sonar supplies high-resolution images at short range and high-quality, distortion-free, rapidly updated images at a range of up to 70 m over a 140-degree sector. This functionality enables the sonar to search for and locate underwater targets more quickly and efficiently than was previously possible.

If damaged, Kongsberg Maritime’s Flexview’s removable transducer can be replaced onsite. The unit can also be swapped out for task-specific transducer configurations if needed.

Kongsberg Maritime’s AUV Hugin was first developed under a joint project with the Norwegian Defence Research Establishment and Statoil (now Equinor) in 1990. Shaped like a torpedo, the Hugin is launched and recovered using a Stinger ramp system, which extends over the stern of the vessel and can be operated in Sea State 4 on up to 5 m freeboards.

Its latest generation AUV, under the brand name, Hugin Superior, was unveiled in December 2018. Rated at 6,000-m water, Hugin Superior provides significantly enhanced data, positioning and endurance capabilities, according to the company. The complete AUV system is delivered in DNV GL-certified offshore containers, along with a portable version of Kongsberg’s HiPAP 502 acoustic positioning system.

Hugin Superior can also use the HISAS synthetic aperture sonar as a navigation aid sensor to improve its autonomous navigation performance by applying signal processing algorithms to extract velocity information from the sonar data in real time. 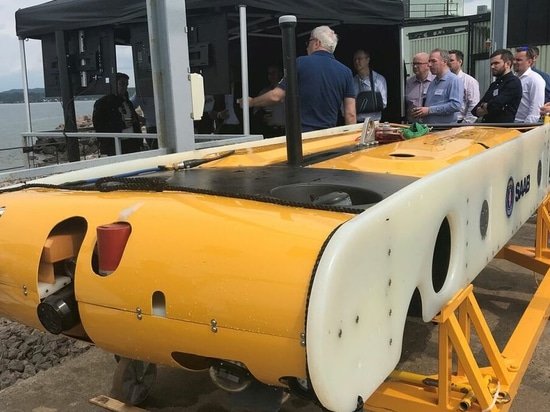