This will be a MED-A2360 series tugboat with 60 tonnes of bollard pull, equipped for multiple ship-handling operations.

This 23-m tug was built to a Robert Allan design with a pair of Caterpillar-supplied main engines.

The main engines drive two Kongsberg US205 P20 fixed-pitch propulsors with 240-cm diameter propellers to give the tug a top speed of 12 knots.

It has a THR Marine-supplied towing winch on the fore deck and a Toimil T-10500M deck crane with a 10-tonne capacity and 8-m reach.

Abu Dhabi Ports owns, manages and operates 11 ports and terminals in the UAE. Its Abu Dhabi Marine Services (Safeen) operates a fleet of tugs in the UAE to support harbour operations.

In 2018, Safeen purchased tugs from Damen Albwardy, in Sharjah to support container ships using the expanded Khalifa Port and ships importing bauxite at the Al Taweelah smelter. These ASD 2411 tugboats came into service in Q1 2019.

Safeen is responsible for pilotage, mooring, vessel handing and towage at Abu Dhabi Ports with a fleet of 12 tugs.

A sister tug to the one purchased by Abu Dhabi Ports was delivered to SAAM to support its operations in Puerto Quetzal, Guatemala in July. 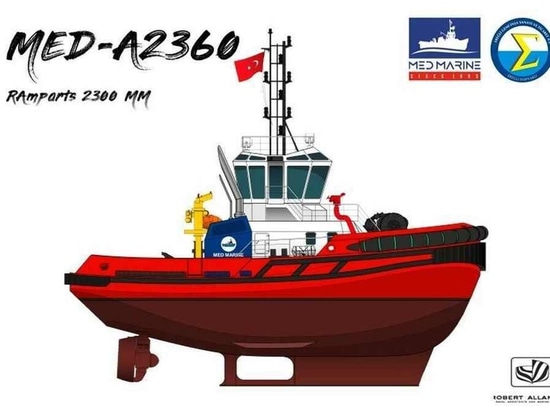