This harbour tug was built to a Robert Allan design with an engineroom system that runs on both gas and marine diesel.

PaxOcean built PSA Aspen to a RAmparts 2800-DF design and Bureau Veritas class as a harbour tug with high levels of automation and for coastal towage.

During sea trials, PSA Aspen achieved a bollard pull of more than 56 tonnes and free running speed ahead of over 13 knots.

These each drive a steel shaft connected to a Niigata ZP-31 Z-Peller propulsion unit, with a 220-cm diameter fixed-pitch propeller, and zero-to-idle slipping clutch.

These engines can transition seamlessly between gas and diesel fuels and back without impacting power output. When operating in gas mode, they comply with IMO Tier III emissions requirements but attain IMO Tier II in diesel mode.

Robert Allan said it worked with Bureau Veritas to design, engineer and configure the gas system for PSA Aspen.

They previously worked together on a RAstar 4000-DF tug design used to construct a series of dual-fuelled escort tugs operating at the Melkoya LNG production terminal near Hammerfest, northern Norway.

“By utilising the RAstar 4000-DF reference design, the approval process [for RAmparts 2800-DF] was significantly streamlined,” said Robert Allan. “The same innovative features used on the reference tug were easily transferred and refined for the new design, providing PSA Marine with an evolutionary tug.”

PaxOcean equipped this tug with deck machinery for a variety of towage and ship manoeuvring operations. This includes two stern anchor winches and a MacGregor-supplied MG-HTW1 hydraulic, double-drum hawser winch on the bow, which is spooled with two 220-m lines on each drum. Palfinger supplied a PK12000M foldable knuckle-boom deck crane for the aft deck.

The vessel’s accommodation was outfitted to comply with the latest Maritime Labour Convention compliant standards for a crew of up to six people. All the crew cabins are outfitted with en-suite bathrooms and there is a common bathroom located close to the wheelhouse.

This is the third LNG-fuelled tug to enter service in the Port of Singapore after two were delivered to Keppel Smit Towage (KST Liberty) and Maju Maritime (Maju Loyalty) in 2018. Their introduction is in parallel to the developing LNG bunkering facilities in Singapore.

PSA Marine has another dual-fuel tug of similar design to PSA Aspen on order at PaxOcean. 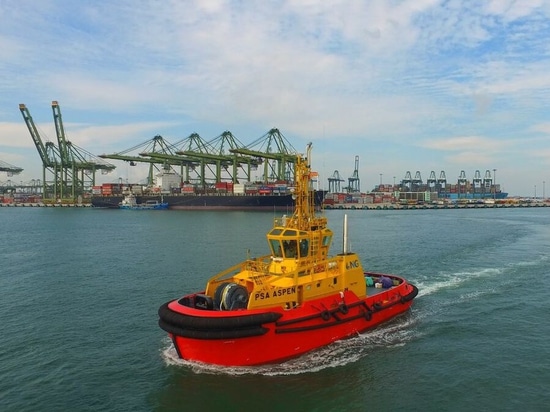 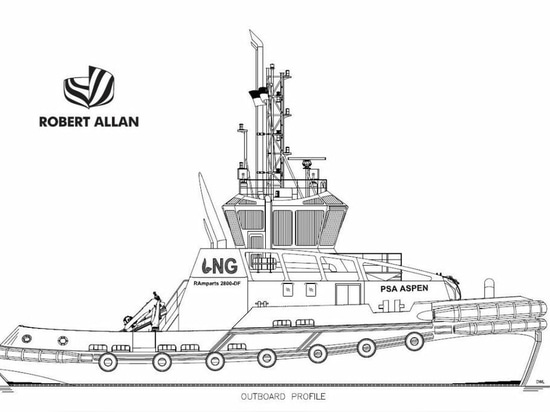