The pros and cons of methanol and hydrogen

Anglo Belgian Corporation has tested renewable fuels methanol and hydrogen on a single cylinder bench engine with varying success. Both fuels have similar benefits to Natural Gas, but with the potential additional advantage of reducing greenhouse gasses

The results of a recent bench test by Anglo Belgian Corporation (ABC) of renewable fuels methanol and hydrogen on a single cylinder engine have demonstrated their potential for reducing greenhouse gasses (GHG). The results were presented at the CIMAC Congress 19 held at Vancouver this year in a paper titled, “ABC’s Dual-Fuel Engines Running on Renewable Fuels like Methanol and Hydrogen”, by ABC development engineer Luc Mattheeuws, and CEO & managing director Tim Berckmoes.

At atmospheric conditions, methanol is a liquid, handling similar to diesel oil, but because of its lower density, it requires two to three times larger tanks, presenting storage issues. With a low flashpoint, it boils at 65°C at atmospheric pressure and on injection, uses latent heat from the intake air to vaporise.To assist with the methanol evaporation, heat can be taken from the turbocharger to supplement the temperature of the intake air.

Dual-fuel engines constructed to use methanol will have a diesel injector and a low-pressure methanol port fuel injection. With this simple system, it is possible to convert existing engines from running on Diesel fuel to operation on Methanol.

On injection, methanol does have an ignition delay, caused as the methanol vaporises and takes the heat out of the mixture, causing the lowering of temperature and pressure, and creating a drop in peak compression pressure. ABC’s tests noted the importance of the injection angle being set correctly to keep atomisation and spray impingement to a minimum.

With an optimised injection angle, methanol could be evaporated faster and a reduction in NOx by 1 g/kWh, was measured, without changing other parameters. On the downside it was noted that engine efficiency dropped as the methanol quantity was increased. However, the engine efficiency was taken back to acceptable levels by reducing the intake air mass and a drop of 3-5% in methanol was enough to boost the engine efficiency to an acceptable limit. Alternatively, by boosting the charge air temperature it was possible to raise the latent heat needed to vaporise the methanol, using the original set amount.

The results for emissions were encouraging as the NOx formation shifted from mostly nitrogen oxide (an ozone depletion participant) at pure diesel, to mostly nitrogen dioxide at 30-40% methanol injection.

Particulate matter (PM)/soot gave a potential reduction but depended on the air/fuel ratio and needs to be validated and studied in further detail, according to Anglo Belgian Corporation, especially when the diesel pilot fuel can be set to minimum. Overall, the test engine was found to run efficiently, comparable to diesel, when the combustion settings were controlled.

Hydrogen, as an explosive mixture, has 2.5 times less energy than NG, with less potential damage, and is liquid at - 253°C, again giving storage issues. Dual-fuel engines constructed to use hydrogen have a diesel injector and a NG admission valve (GAV) and it is similarly possible to convert existing engines.

Hydrogen has an alternative issue with methanol, in that it pre-ignites. It was found that at the same injection point, with the same compression, speed and load, pre-ignition always started at the same concentration of hydrogen. When boosting the air flow, the possible amount of hydrogen to inject will also increase; but pre-ignition still occurs due to its low flashpoint.

Hydrogen also has the tendency to auto-ignite and as the testing was carried out on a single cylinder engine, it was not possible to increase the charge air pressure to look for solutions to the issue. It was considered that the test engine was suffering from hot spots, or a local high concentration of hydrogen. Further testing will be considered when ABC is able to increase the intake air mass to see if this will prevent auto ignition.

The NOx formation was comparable to diesel, though this is only because of the high mass flow of intake air and the NOx formation depends highly on the dilution rate of the hydrogen. Hydrogen’s flame velocity (and rate of expansion) is far higher than diesel, so heat release in the cylinder is earlier and this will also result in a high NOx emission. One solution to reduce the NOx emission is to dilute the mixture, decreasing the flame velocity and therefore delaying the heat release.

CO2 was found to have a potential 50-60% reduction when tested with a higher boost pressure and is under investigation for improvement.PM/soot was measured with a potential positive reduction and reduced with increased hydrogen introduction. Efficiency of the test engine was comparable to diesel and is expected to be slightly higher when fully developed and designed.

Generally, methanol and hydrogen have the potential to reduce CO2 with positive and negative benefits. The handling of methanol in a liquid phase makes it easier to use this fuel in retrofit solutions. Bunkering hydrogen on board a vessel will make it more difficult. Both fuels are not readily available in all ports, so the infrastructure needs to be developed. The costs of these fuels are not yet stabilised and will fluctuate depending on manufacture, demand and availability.

The potential to combust green fuels in the ABC combustion engine is proven, although the combustion process is under review. If the design of the single-cylinder research engine can be extrapolated to a multi-cylinder engine, then the usage of methanol and hydrogen show the potential to reduce CO2 emissions.

Methanol and hydrogen do potentially reduce CO2 emissions. Handling methanol in liquid makes it easier to accommodate retrofits, whilst hydrogen is difficult to store. Hydrogen ignites easier than methanol, but it needs to be fully renewable to become totally CO2 neutral.

High amount of heat from the air intake manifold

Hydrogen highlights issues with pre-ignition and requires further investigation around:

at the moment of diesel injection, can auto ignition can be prevented by a reduction of the

temperature for the hydrogen-air mixture?

can hot-spots be prevented on the piston and cylinder head?

Data such as tabulated peak pressures and temperatures will need to be gathered on a multi-cylinder engine to fully review the pros and cons of the fuels, as there are some issues still to be investigated. 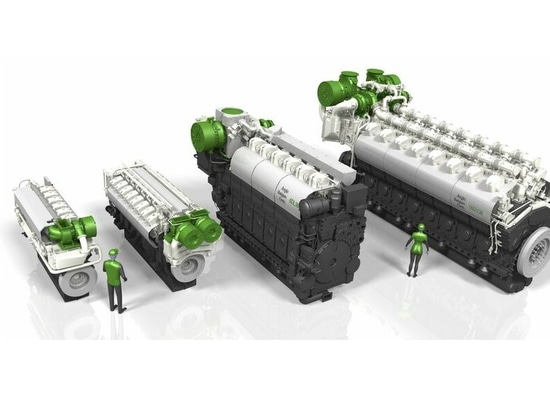 A selection of ABC’s four-stroke medium-speed engines, which can be configured in V or in-line