Revisiting an old friend (sort of)

When Beneteau went looking for the right designers for their very much all-new First Yacht 53 the results were thought-provoking. As is the yacht...

The First Yacht 53 has a lot to live up to. There’s the heritage of the First marque, which represents more than 40 years of offshore racing and cruising. There’s the exceptional pedigree of a design team that combines 25 years at the forefront of America’s Cup innovation with the groundbreaking flair of Brenta and Wally. And there’s also the fact that nearly a decade has passed since the launch of the last offshore yacht to bear the famous brand name, the Juan K-designed First 30. It’s fair to say that this is a long anticipated and eagerly awaited boat. Indeed, five First Yacht 53s had already been sold off plan before Beneteau began building the prototype.

The renaissance of Beneteau’s First series began several years ago with a range of small, lightweight sportsboats, some with simple accommodation. It’s a big step up from them to the brand new flagship of the range. The First Yacht 53 is a return to the mainstream cruiserracer, or “luxury performance”, territory that used to define the brand, but it’s a far cry from the Firsts of 15 years ago, which were designed for a full racing crew to live on board for several weeks. Most people don’t sail like that anymore.

‘This is an important yacht for Beneteau so we held a competition for designers,’ says project manager Damien Jacob. ‘Four design teams were invited to submit their concepts. The result was three very similar designs and a distinctly different one from Roberto Biscontini and Lorenzo Argento with a very wide hull and an interesting cockpit layout.’

Biscontini and Argento got the work, Jacob explains, ‘because we felt strongly that the First brand had to offer something genuinely new and the other design concepts seemed too close to what other brands were offering.’ The Italian team’s CVs, which when put together read like a roll call of the world’s fastest racing yacht hulls and most stylish superyacht designs, must have helped, too. That said, this is actually the first time that either of them have applied their skills to designing a mainstream, mass-production cruiser-racer. Biscontini focused on perfecting the hull, keel, rudders and rig while Argento took care of both exterior and interior design.

‘The hull of the First Yacht 53 comes directly from my experience of designing racing boats,’ Biscontini says. ‘The width of the boat is carried all the way to the stern and it has a hull shape that reduces and elongates the wetted area as soon as the boat begins to heel over. Dynamic length is very important.’

A huge amount of work went into precisely positioning the boat’s centre of gravity, centre of effort and centre of buoyancy. Biscontini brought in one of the world’s leading experts in computational fluid dynamics (CFD), Rodrigo Azcueta of Cape Horn Engineering, to exhaustively test 25 different hull shapes in a very wide range of wind and sea conditions. ‘We also did a lot of work on weight analysis, which is a very important part of the design,’ Biscontini says, ‘especially for a cruising boat with lots of heavy interior items inside the hull.’

Production boatbuilders rarely apply such extensive CFD analysis to the design of a cruiser-racer. ‘It’s all about achieving perfect balance and the best sensations at the wheel,’ Jacob explains. ‘Power comes from the square metres of sail area, but this is about the feel of the boat, making it rewarding to sail.’

The steering system is from Jefa, with Dyneema lines between the twin rudders and wheels. ‘Twin rudders have three advantages,’ Biscontini says. ‘First, you already have an emergency rudder built in, which is a very good thing for an ocean cruiser. Second, on a modern hull shape where full beam is carried all the way to the stern, the leeward rudder works in a very efficient way whereas a single rudder will perform poorly when the boat heels over. And third, twin rudders give you a lot more space in the middle of the stern for a tender garage.’ There’s ample room in the stern of the First Yacht 53 to stow a fully inflated 2.4m dinghy.

The design team’s strong focus on balance extended to the boat’s rig and sailplan. The position of the mast was reviewed several times due to what Biscontini calls “a concatenation of factors” that also informed the shape of the hull, the feel of the helm, the location of loadbearing structures and the weight distribution of the boat’s interior furniture, tanks, equipment and systems. ‘We went for a modern approach with the mast quite far aft,’ Biscontini says. ‘This allows a better balance between the sizes of the mainsail and headsail.’

There’s an option for a carbon mast that’s a full metre taller than the standard alloy mast, with a longer crane on top, but whichever rig you choose there aren’t any runners, just a pair of fixed backstays with the option of a hydraulic tensioner. The boat can be bought without sails but Beneteau is offering a North Sails package of mainsail, genoa and code zero. ‘We brought them into the design process early on, to discuss things like the rig and the sails’ shapes,’ Jacob says. ‘It helped to have all of the players around the table.’

Standard specification includes an integrated bowsprit and a throughdeck headsail furler, Dyneema running rigging and lifelines, Harken winches and deck gear, but no mainsheet traveller. ‘There’s a watershed at around 50ft LOA,’ Jacob explains. ‘Below that size, owners tend to want to race a lot; above that size fewer of them are interested in regular racing. They still want to enjoy sailing a high-performance boat, but are likely to race maybe once or twice a year at events like Les Voiles de St Tropez. The rest of the time they cruise. This is why we decided that a mainsheet traveller was not mandatory equipment.’ There is, however, an option for a mainsheet pod with a fixed winch in the middle of the cockpit.

There are two keel options: a 2.5m fin or a 3m fin – Biscontini says the latter is the optimal draught for a boat of this length. Both keels have the same weight of bulb on the bottom, although the performance keel (3m) has a lead bulb and cast iron fin, while the standard keel (2.5m) is full cast iron.

‘It’s all relative,’ says Jacob. ‘If the sailplan and the sail trims are the same then for the same sailing heel angle you’ll need less weight on the rail with the performance keel. So one can enjoy better sailing performance with fewer crew. On the other hand, the boat can be raced fully crewed, with more righting moment so is able to carry more sail area in stronger breeze. It all depends on the type of sailing the owner wants to do. Finally, we have a bit more form stability due to the larger beam in comparison to the competition’, he adds.

The shape of the First Yacht 53 is very different from any of its predecessors, yet even at first glance, from any angle, it’s unmistakably a First. ‘It had to be contemporary but I also wanted to be very respectful of the brand’s 40-year tradition of yacht design,’ Argento says. ‘It’s been an interesting challenge. Modern yachting is about new technology, new materials and new ways of using the boat. In the past, boats were sailed more aggressively and crews were larger. Now they’re sailed by a couple or by four people.’ This change has informed the design of the 53’s cockpit and deck layout – although it can still accommodate a full race crew of seven plus a few passengers – and especially the boat's interior, which features huge, deep sofas and a smaller than usual saloon table.

‘With interiors I start with the concept that a boat should be a boat,’ Argento says. ‘There has been this tendency to make boats look like homes and while I agree with some aspects of that, like the comfort of the sofas, it should be clear from the general feel and shape of things that you’re in a boat rather than a house. We dug deep into Beneteau tradition to bring back some of the design details they used in the past, like laminated wood fiddles.’

Beneteau expects to sell around 25 to 30 of these boats per year, but has no plans for a one-design class. The First Yacht 53 will race on handicap with an IRC rating of 1.213 for the version with tall carbon mast and three-metre keel options. Its polars predict a reaching speed in excess of 12kts on flat water with an asymmetric spinnaker in 20kts of breeze. Racing or cruising, it sounds like a great deal of fun. 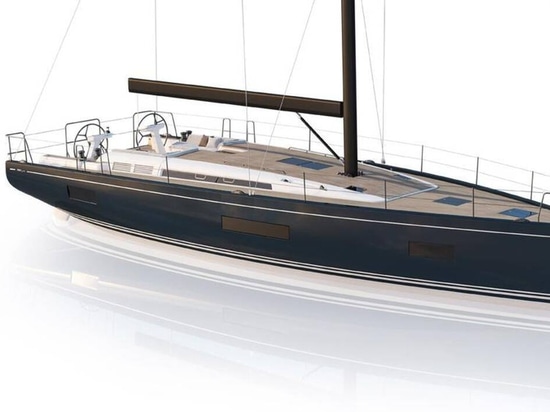 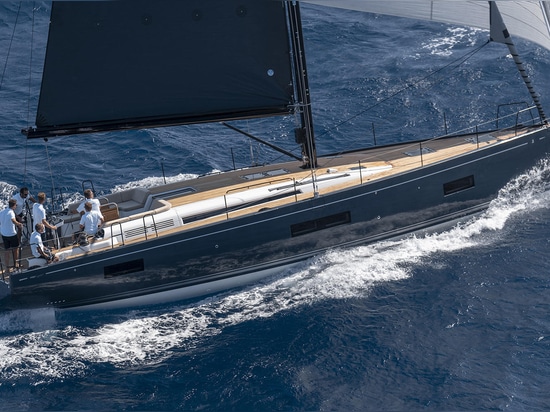 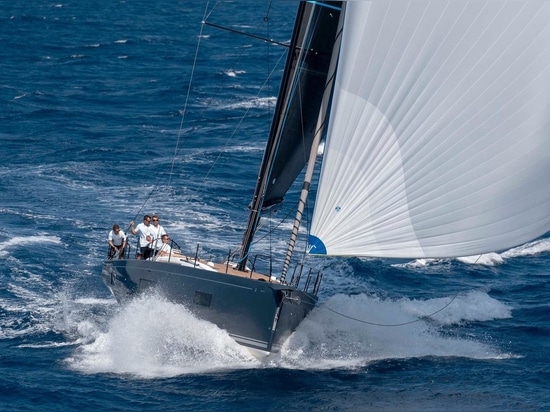 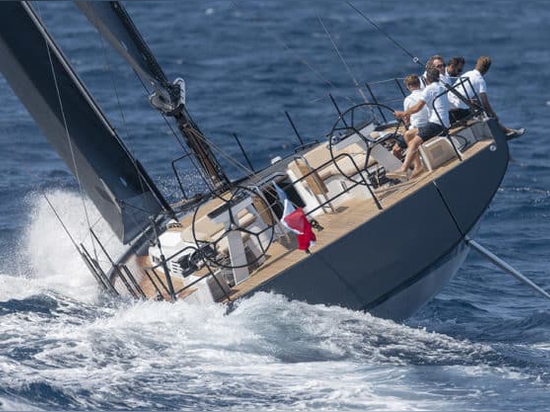 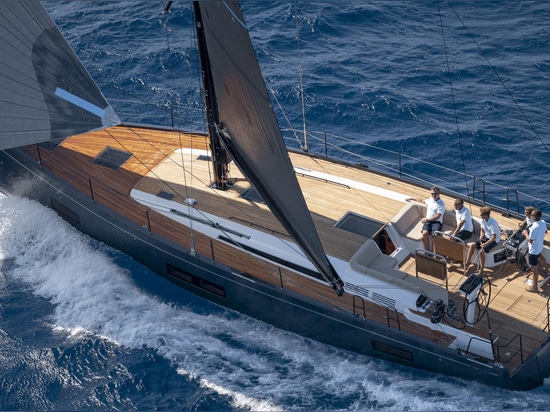 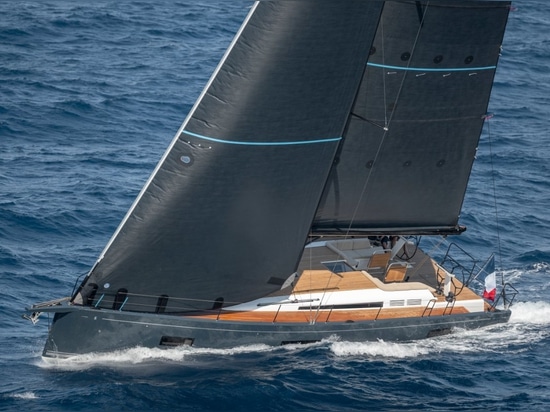 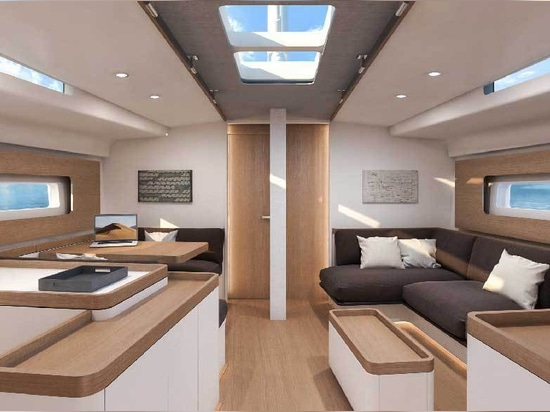 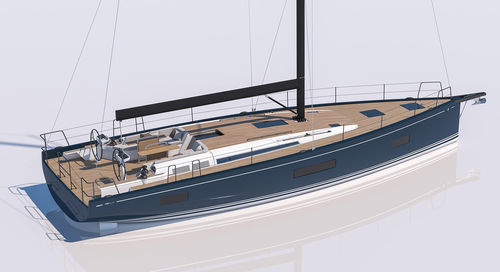