Sportfishing, along with freediving, was very much on the agenda for the Merry Fisher 895 Marlin’s international debut – in Stewart Island –with the crew of the popular television series ‘Fish of the Day’ aboard.

Fish of the Day, fronted by Clarke Gayford, fiancée of Prime Minister Jacinda Ardern, is currently filming its fourth series. It screens in more than 80 countries, including New Zealand, with season three now screening on Air New Zealand. It premiered on National Geographic’s People channel in August.

The premise for Fish of the Day is simple: fish for and catch a specimen of the show’s target species and then eat it, expertly cooked by a local chef, capturing the whole journey on video.

Clarke is a passionate sportfisher and environmental advocate. With Fish of the Day’s producer-director, film maker Mike Bhana, Gayford partners with Jeanneau, using the French manufacturer’s vessels to film in exotic locations around the world.

Using Clarke and Fish of the Day to reveal a new, larger and more fishing-oriented Merry Fisher model to the world makes good sense. For Jeanneau’s international market, Stewart Island, perched on the edge of the great Southern Ocean, is about as remote and exotic as you can get.

The Merry Fisher 895 Marlin is a full-bodied, almost 9m vessel with generous accommodation that sleeps up to six. It has a comfortable, spacious wheelhouse, an enclosed toilet and shower with a second cockpit shower and cooking facilities, making it suitable for family fun days and overnighters.

Jeanneau’s marketing people call the model “The SUV of the Seas” and it’s certainly a versatile lifestyle vehicle.

What Jeanneau has managed to do with the space below decks is quite amazing. There’s a full-size, fully featured bathroom with an electric toilet, fold-down seat, basin, cabinet and shower, a large double cabin in the bow with v-berths (plus infill) and a decent hanging locker, plus a second double cabin to port extending under the saloon. This cabin has a queen berth set across the beam and a surprising amount of inbuilt storage.

All this, plus sleeping accommodation for another two in the saloon, in a vessel that’s not quite 9m long.

The Marlin has a layout that’s more fishing-oriented than other versions of the 895, including a larger cockpit and twin 300-litre fuel tanks for extended range.

Its self-draining cockpit is a decent size with moulded, non-slip decks and plenty of storage in the lazarette for dive gear and other bulky items. Like other Jeanneaus, the Marlin’s central transom unit slides inboard on tracks so that the outboards can be tilted far enough to raise the lower units from the water. When the outboards are down, the transom slides outboard, making the cockpit bigger.

The transom features two bins covered by a pair of hinged PVC lids, which the Fish of the Day crew used to store bait and terminal tackle. If you do a lot of bait fishing or fish filleting, an aftermarket bait board would be sensible. The wash-down/cockpit shower makes it easy enough to keep the cockpit clean.

The transom unit also features two cupholders per side, a low railing to stop bags and boxes sliding off and a row of seven angled rod holders across the back. Two angled through-coaming rod holders are suitable for trolling and the black anodised aluminum rocket launcher and transom rod rack can between them store 14 rods. On New Zealand spec boats all the rod holders are fitted with gimbal pins, but if you need more rod holders for trolling, you’ll have to fit bolt-on types.

A clever foldout transom seat complements a similar folding seat under the gunwale on the starboard side. With the seats down and the teak cockpit table in place, it’s a nice spot for entertaining.

Access to the swimstep and boarding ladder is on the starboard side via a stainless-steel gate. To port is the (unplumbed) live bait tank; the swimsteps are large enough to accommodate a diver gearing up and the gate is wide enough to drag a large fish through if necessary.

Fish of the day

The ‘fish of the day’ for our jaunt aboard the Merry Fisher was trumpeter, which is abundant around Stewart Island. But catching one proved to be more of a challenge than anticipated.

We joined the boat and film crew on the second day of filming. The day before they had hosted journalists from Australia, but trumpeter had been elusive. Fortunately for everyone concerned, with a couple of extra rods fishing and some better intel from local fishers, we succeeded on Day Two, catching several trumpeter for the camera.

It wasn’t easy though, with virtually every bait or lure snagging a blue cod or wrasse before a trumpeter could get near it. The fishing is fast and furious at Stewart Island, but catching anything other than voracious blue cod is a bit of a challenge!

Luckily, blue cod is great eating and Clarke kept a few to supplement the trumpeter, along with kina and paua collected while filming a free-diving segment for the show. The kaimoana was to star in a chef-cooked seafood meal in Invercargill the following day.

Seen side-on, the Merry Fisher 895 Marlin has a distinctive profile. It’s quite tall with plenty of freeboard, which is reassuring in a seaway, but its tallness is nicely balanced by a generous beam carried well forward to accommodate a spacious double cabin in the bow. Stability at rest is excellent, which was appreciated by anglers and film makers alike.

Last season the crew spent a lot of time on a smaller Merry Fisher 795, which will be their main vessel this season as well. It served them well, both as a filming platform and sportfishing vessel, but this boat is better still, says Clarke, larger and even more stable.

On the water, the 895 Marlin feels capable enough and twin Yamaha 225hp outboards give it a top speed of over 40 knots. We were reasonably comfortable travelling from fishing spot to fishing spot in a variety of sea conditions and the hull is certainly a dry runner, though it was hard to avoid the odd bang in a quartering sea, a trade-off for all that volume in the bow perhaps? There were a few minor interior rattles in the rough, but those aside, the boat seems well enough put together.

Like other Merry Fishers, the wheelhouse is offset to port, allowing a generous walkway down the starboard side to the bow. Bulwarks are topped by stainless steel railing at thigh height, split at the bow for ease of boarding. The rail offers safety and support while fishing.

The bow is good to fish from, or you can relax in the seat moulded into the cabin top. Like the wheelhouse, the bowsprit and anchor are offset, this time to starboard, to allow boarding over the bow, and there’s also a side door in the bulwark forward of the cockpit. A Lewmar capstan does anchor duty, operated from the helm or the bow – there’s a remote control inside the anchor locker.

Another distinctive feature of this boat is its reverse sheer windscreen. Furnished with two windscreen wipers, it not only looks the business, it provides extra useable space inside the wheelhouse.

Considering the boat’s length, the wheelhouse is quite spacious, with seating wrapping around the saloon table. The table drops down to make a double berth and the bench seat has a reversible back, so it addresses either the table or the windscreen.

Access to the wheelhouse is through either the rear sliding glass doors, or the side door next to the helm, which is great when coming alongside, securing docking lines, or handling the vessel shorthanded.

Vision from the helm is very good and I liked being able to poke my head out the side door in the misty conditions of early morning. The helm seat has a folding bolster and is nicely contoured and padded while the helm console is designed so that everything falls easily to hand.

Overhead, a sliding hatch with a night screen lets in light and air and the side windows also slide open. There’s plenty of glass, so the saloon is bright and airy, complemented by the decor’s fresh colour palette.

A narrow cabinet behind the swivelling bucket-style helm seat, which in other versions of the 895 is occupied by the galley, offers some storage and a sink, but in the Marlin, the cooker has been repositioned under the windscreen to port. The refrigerator is under the helm seat.

The wheelhouse roof has been redesigned for the Marlin. This boat has a roof rack suitable for transporting paddleboards, kayaks or an inflatable dinghy. A bank of LED floodlights illuminates the foredeck.

We utilised the foredeck for fishing during our Stewart Island jaunt, as well as launching and retrieving the drone. There’s ample space up there and the foredeck feels nicely secure thanks to the railing. There are also plenty of drink bottle holders and provision for the cockpit table. Somewhat unusually, the gas locker is in the bow on the port side so it’s closer to the cooker.

Boating NZ left Halfmoon Bay in the dark on the morning ferry, arriving on the mainland in time to photograph the Merry Fisher as it returned to Bluff. Winds of 35-40 knots were forecast for later in the day, which would certainly have made conditions in Foveaux Strait treacherous, so Mike Bhana decided to make his run early. The Merry Fisher enjoyed a safe, easy passage in calm seas, just as it had on the way over, cruising at 27 knots all the way. With Foveaux Strait, it’s all about picking your weather window.

Jeanneau’s 895 Marlin should prove a popular addition to the Merry Fisher range here in New Zealand, while its official international launch in exotic Stewart Island is bound to pique interest overseas. This boat has already been sold and Orakei Marine is confident others will soon follow.

If it’s a versatile, roomy, family-friendly vessel with a fishing and diving twist you’re after, the Merry Fisher 895 Marlin is certainly worth a look. You may be pleasantly surprised by how much value you get for your dollar[/caption] 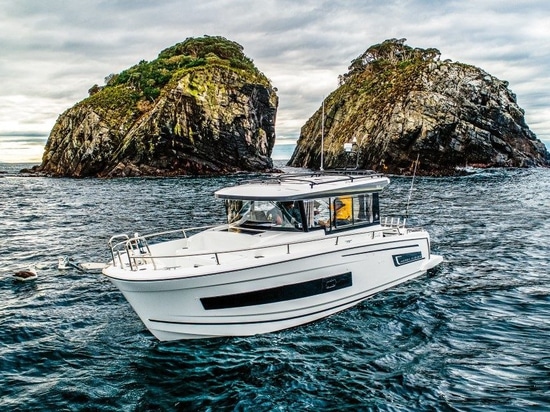 Clarke Gayford on the bow of the Merry Fisher at Oban, Stewart Island. 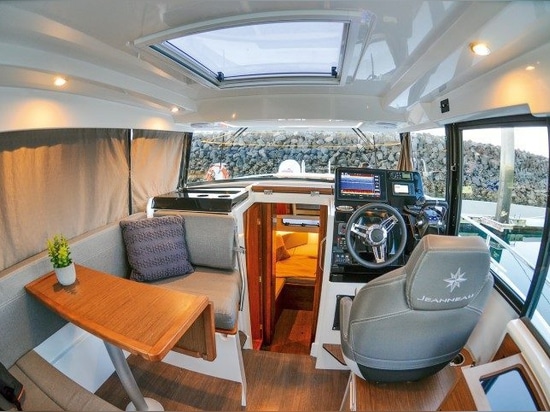 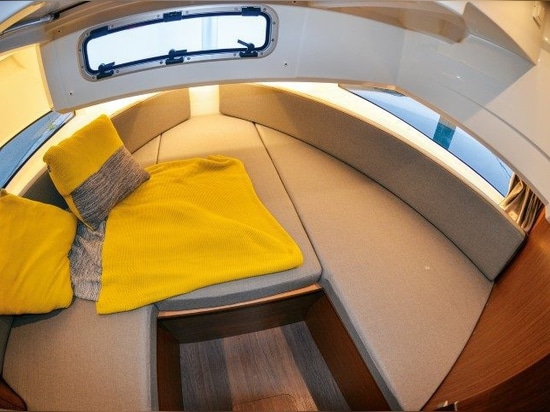