Italy's Marco Gradoni was crowned the 2019 male Rolex World Sailor of the Year on Tuesday 29 October in Bermuda, becoming the youngest ever recipient, at the World Sailing Awards. Anne-Marie Rindom of Denmark received the female accolade to follow in the footsteps of the all-time great sailors.

Gradoni, at 15 years old, was crowned Rolex World Sailor of the Year for his success in the Optimist class, having won three consecutive World Championship titles, the first sailor to ever achieve this result.

Rindom has dominated the Laser Radial over the last 12 months and found rhythm that was unrivalled as she secured her second world title, which has highlighted her as a favourite for Tokyo 2020 gold.

The World Sailing Awards celebrate outstanding achievement and exceptional contributions to the sport of sailing. It is the social highlight of World Sailing's Annual Conference and recognises success throughout the sport.

For setting a benchmark in sustainability, the RYA / The Green Blue received the World Sailing 11th Hour Racing Sustainability Award.

The Beppe Croce Trophy was awarded posthumously to Jeff Martin, who dedicated his life to sailing through his involvement in the Laser class, and the President's Development Award went to Oman Sail, for growing the sport in their nation and region.

Italy's Marco Gradoni is the most accomplished sailor of his age group and from September 2018 he won every single Optimist event he participated in, securing 14 gold medals.

Speaking at the Awards ceremony he commented, "It's a dream come true to be sat here in Bermuda with the best sailors of the world. It is something really amazing for me. The list of previous winners are the most famous people of sailing and to be with them is unbelievable but I know that I have to stay focused on my goals because this is important. I'm speechless because this is a dream come true. It is such an honour for me.

"Since 2017 I have worked a lot and tried to stay focused. Every day I thought about where I had to improve and study and do things at my best level and it worked. From 2017 I won a lot and in the last 12 months I have won everything. I'd like to thank my mum for supporting me."

The road to an Olympic Games has its ups and downs and regular success is often hard to come by. Denmark's Anne-Marie Rindom has found form at the right time ahead of Tokyo 2020 and has been the leading Laser Radial sailor in 2019.

She secured her second world title in 2019 and that success has not been isolated; throughout 2019 she has secured gold medals at four high-profile events.

Before she headed to Japan for the 2019 World Championship, Rindom secured gold at the Trofeo S.A.R. Princesa Sofia Regatta in Palma de Mallorca, Spain. She then topped the standings at her second consecutive event after she won in light and challenging wind conditions at the Hempel World Cup Series event in Genoa, Italy. Just weeks later she made it three in a row by securing the European Championship title in Porto, Portugal, moving to World #1 as a result.

On her achievements, Rindom commented, "To become Rolex World Sailor of the Year and joining a list of legends is truly amazing. I'm so delighted to be on that list and it's a great honour for me. It meant a lot to be nominated and I was very happy and excited to just be here but to win it is amazing. I have got my sister here with me. She's come all this way and we're only here for 50 hours so tonight we will celebrate and fly home tomorrow morning.

"This year has been the best year of my career so far so I'm very pleased with how it's going. We are training for next year, the Olympic year, so it's going to be an important year."

Throughout 2018 and 2019, the RYA / The Green Blue, a joint environmental programme, upped their sustainability efforts and reached significant numbers of individual sailors. For this, they secured the World Sailing 11th Hour Racing Sustainability Award.

The Green Blue's main objective is to empower boaters to take action on sustainability through providing clear training and guidance on key issues. They provide extensive advice to the British boating community in print and online, train instructors and deliver workshops with clubs and centres throughout the year.

Through industry events, club conferences and delivery through the RYA's and British Marine's training programmes, they continue to engage sailors within the nation.

Savery commented, "Congratulations to the Royal Yachting Association / The Green Blue for rising to the top of a great pool of candidates for the 2019 World Sailing 11th Hour Racing Sustainability Award.

"I applaud their commitment to developing practical tools and resources to help the sailing community adopt sustainable solutions and operations. This work directly supports the World Sailing Agenda 2030 goals, and our mission at 11th Hour Racing to protect and restore the health of our ocean."

David and Peter Askew's team on Wizard received the Hempel Team of the Year Award after a highly successful 2019 where they dominated the offshore circuit.

Wizard took the Award ahead of Alinghi, the Australian SailGP Team and Wild Oats XI.

Skippered by Charlie Enright, the team featured offshore veterans such as Will Oxley, Richard Clarke and Mark Towill and won the 2019 RORC Caribbean 600 Trophy, the West to East Transat Race and the Rolex Fastnet Race in 2019.

For its cutting-edge technology that has been carefully developed over the past ten years, the F50 beat the Sunfast 3300 and Ichi Ban to the Goslings Boat of the Year Award.

Launched for SailGP, the fan-centric grand prix racing circuit, the F50 is a high-tech, one design class and is powered by a 24-metre wingsail and flies above the water on hydrofoils which has produced a 15% performance gain in comparison to its predecessor, the AC50.

SailGP features a fleet of six F50s, three of which are complete new builds. Compared to the AC50, they have been extensively modified with new foils and board cases, new rudders and elevators, new hydraulics and electronics, a new cockpit layout for five crew, a new steering system, and a new flight control system operated by a joystick.

Sir Russell Coutts, CEO of SailGP, attended to receive the Award from World Sailing Vice-President Torben Grael on behalf of the F50.

Martin dedicated his life to sailing and more specifically, the Laser class. His engagement with sailors and members worldwide undoubtedly enabled more countries to compete internationally. This subsequently enabled more nations to participate in the Olympic Games and established a legacy for these nations from elite sailing to the grassroots.

In 1981, Jeff became an International Judge and an International Race Officer and Measurer in November 1998. His involvement in World Sailing started in 1991 and he served as Vice Chairman of the Classes Committee from 1991 to 1994 and again from 1999 to 2000. In 2001 he became Chairman of the Classes Committee and a Council representative and held the post through to 2016.

His work worldwide through the Laser saw friendships form with sailors, race officials and global sports administrators. He has left a true legacy to sailing and to all those who were lucky enough to cross his path.

The President's Development Award is awarded to those who strive to develop and grow the sport on a national or international basis.

World Sailing President Kim Andersen handed the award to Oman Sail in 2019 with CEO, David Graham, receiving the accolade on behalf of the organisation.

Commenting at the ceremony on Oman Sail, Andersen expressed, "Over the last ten year's Oman Sail has taken a huge step forward in in growing the sport. They have grown from nothing to 200 people tirelessly working across multiple pillars of our sport including coaching, officiating, media, governance and event management.

"Their youth program has enabled youth sailors to move through the ranks and their sailors now have realistic goals of reaching Tokyo 2020. Furthermore, barriers to participation have been shattered and mixed sailing has become the norm in a previously passive nation."

Graham thanked His Majesty Sultan Qaboos bin Said for creating the vision for Oman Sail and enabling citizens to make a greater contribution as well as the staff delivering the programme of work. 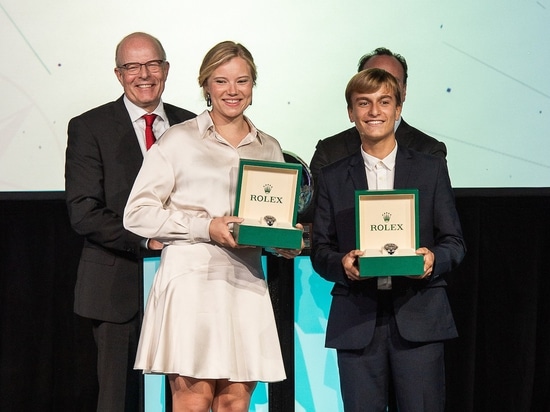