If you’re the sort of sailor who has tried a cruising catamaran and loved the living space but found the actual sailing experience rather joyless and unrewarding – no feel in the helm, a lack of lines to tweak, no real sense of speed or acceleration – then it’s time to take another look. For the first time in many years there’s a new range of cats on the market that do have lightweight hulls and large, powerful rigs, but aren’t skittish or fragile and don’t cost millions. They’re designed specifically to appeal to experienced sailors and engineered to deliver the same amount of pleasure, engagement and deep satisfaction that you get from sailing a well-tuned monohull. With its new Excess range of catamarans, Beneteau Groupe is on a mission to put the fun back into mainstream multihull cruising.

Two models, the Excess 12 and 15, are already in the water at the time of writing and set to make their début at this year’s autumn boat shows. They’ve performed well in sea trials with boatspeed to match the true wind speed in just three to six knots of breeze. The Vendée Globe sailor Marc Guillemot has been involved in the sea trials and declared himself impressed. ‘But it’s not really about performance figures,’ says Beneteau Groupe’s inhouse multihull design guru Bruno Belmont. ‘Those are just numbers. It’s more about feel and sensations – it’s all about the pleasure of sailing.’

Most of the early offshore cruising cat designs were relatively lightweight, performance-orientated yachts, but the last three decades have seen a mass migration of nearly all major cruising multihull brands towards the low-performance, maximum comfort end of the spectrum. This move was driven by strong demand from charter fleet operators for docile, easy-to-handle yachts with all mod-cons and widebeam hulls. The inevitably stodgy sailing characteristics of these boats have been exacerbated by increasingly strict regulations in the EU’s Recreational Craft Directive on the size and strength of scantlings, which have made each new generation of yachts progressively heavier. Beneteau Groupe’s new Excess brand aims to change all that by moving in the opposite direction with a range of offshore multihulls designed to appeal to monohull yacht owners, beach cat sailors, surfers and kitesurfers.

Simplicity is part of the solution. Many experienced sailors will forego some aspects of comfort to save weight, Belmont explains, which is the key to improving multihull performance. ‘For example, they are happy to trade in a chest of drawers for a simple, well-constructed locker. But there is no compromise on the important things like a queen-size island bed in each of the cabins. The hull beam must be wide enough for that.’ A simpler interior fit-out also saves money, which can then be spent on things that make sailing more enjoyable such as high-quality Rutgerson blocks and Dyneema steering cables.

The cockpit design is also aimed at experienced sailors. It’s a larger area than you’ll find on most comparable cats and designed to be more versatile, rather than just optimised to enable the helmsman to do everything himself. ‘To maximise the Excess Cats’ appeal to monohull sailors, we’ve taken the standard cockpit layout of a modern monohull, with twin wheels aft, and put a platform in the middle,’ Belmont explains. ‘The helmsman is not isolated from the rest of the people onboard. The boats can still very easily be sailed solo, but we have also considered the scenario of several keen sailors onboard. Two or three people can work the boat and have fun sailing.’ The unique retractable sunroof is also designed to encourage active sail trimming, giving the helmsman and crew a good view of the sails while also offering plenty of shade.

A great deal of effort has gone into designing the sightlines aboard these boats to ensure the best possible view from the helm, both around and through the accommodation. From either of the helm seats, at a glance you can see the bows of both hulls, enough of the sails for accurate trimming, under the jib and right through the bridgedeck. ‘We’re using clear, untinted plexiglass to improve the helmsman’s vision,’ Belmont says, ‘and that also makes it much brighter inside, which is an unexpected bonus.’

One notable feature of the Excess cats’ hull design is high volume in the bows, which has a damping effect to reduce pitching and increase boatspeed. ‘We used to think cutting through waves was a good thing,’ Belmont says, ‘But it actually slows the boat down quite a lot.’ Weight distribution was another focus for the design team and care has been taken to locate most of the heavy equipment towards the rear of the hulls between the cabins and the engine compartments. For similar reasons, the mast is stepped on boat’s centre of gravity.

To save weight, the yachts’ structures include more vacuuminfused components than any previous multihull that Beneteau Groupe has built, with sandwich construction throughout, above and below the waterline. The weight of interior furniture is reduced by 30 to 50 per cent by building it as integrated modules rather than individual pieces. However, the hull design also allows for a relatively high payload, which Belmont says is a more important parameter than ‘light boat’ displacement figures when comparing cruising multihulls.

The deck plans and interiors are designed for private owners. ‘When designing a yacht for charter you want to create as many separate areas as possible,’ Belmont explains. ‘There might be four couples on board who’ve never met and they’re going to want places where they can sit apart from each other, hence the addition of heavy, performanceinhibiting features like forward cockpits and flybridges.’ And instead of just offering a choice of interior fabrics, there’s a choice of three completely distinct interior design schemes with different fabrics, surfaces and furniture styles.

Another crucial design parameter for multihulls is the hull length to platform length ratio and Belmont set a limit of 1.5:1, for reasons of seaworthiness. ‘Even if only five per cent of owners are actually going to cross an ocean it’s still important,’ he says. ‘We expect quite a few Excess owners to do the ARC.’

One feature is notable by its absence. ‘There are no daggerboards because they require a bit more knowledge,’ Belmont says. ‘You need to be a good sailor to use them properly, or there is a risk of either capsize or breaking them. Even fast dinghy cats like Darts and Hobies tend not to have them. However, I don’t rule out using them in future.’

Another key performance indicator, the sail area : displacement ratio, is at least five per cent higher for an Excess cat with a standard rig than any comparable catamaran on the market – and 10 per cent higher with the powerful Pulse rig. Whichever rig option you choose, it’s relatively simple in terms of geometry with no runners or backstay, just a sweptback shroud base. There’s no vang or kicker either, to avoid the need for a very heavy boom. ‘There is so much power in the mainsail leech that it makes sense to use a flying barberhauler instead,’ Belmont explains. The mast is stepped quite far aft to allow for a larger jib and smaller mainsail – a more balanced sailplan.

Off the wind, to get the best out of these boats it’s important to fly a Code Zero or gennaker, rather than relying on main and jib. ‘I’d love to see a big increase in the use of these sails,’ Belmont says. ‘We want people to switch off the engine in three to five knots of wind and spend more time actually sailing. So we’re working with sailmakers and riggers to perfect two things that will allow people to keep their code sail or gennaker permanently rigged and ready for use: a security locking system and UV protection.’

With more power and fun comes the need to know when to reef. ‘We are working on a sail-monitoring system that will warn people when they have too much sail up and tell them when they need to reduce it,’ Belmont says. ‘But I am undecided on automatic systems. We use them already on very large yachts but I’m not convinced that they’re effective yet on small-to-medium size boats. Most of the development work so far has been focused on helping Ultime skippers to go even faster, rather than enhancing safety.’

Excess cats are aimed primarily at private owners, but you’ll probably be able to charter one soon. ‘The big charter fleets are interested because they know many of their customers want more than just a nice platform for their holiday,’ Belmont says. ‘And we know that many people who go on yacht charter holidays actually spend more time kitesurfing than sailing. We feel their frustration – they want to enjoy sailing but don’t want to frighten their family.’ 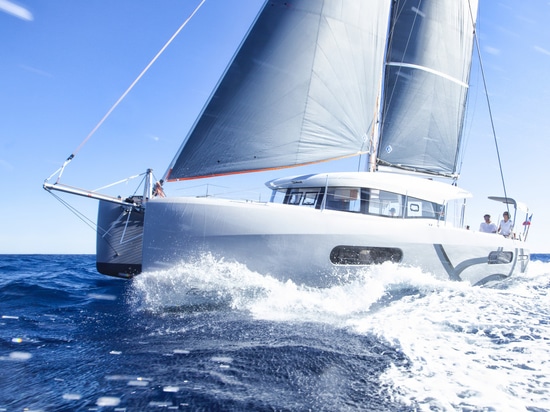 the new multihull brand from Beneteau Groupe, Excess is on a mission to put the fun back into mainstream multihull cruising. Itʼs aimed squarely at experienced sailors who want the generous living space and family accommodation of a multihull but who find many of the other cruising cats on the market rather dull and stodgy to sail 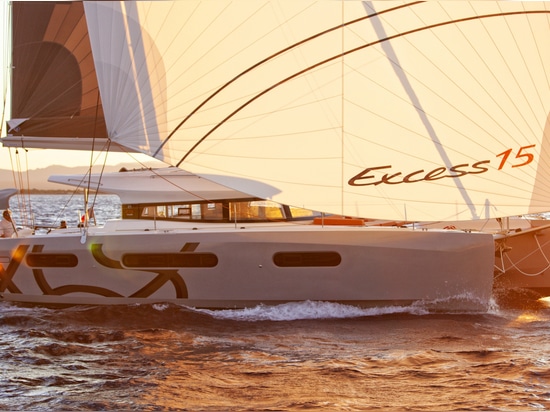 the high volume of the forward hull sections provides a damping effect on pitching and also improves performance. The chines on the topsides of the Excess hulls allow the beam to flare out and increase internal volume where it matters most without a significant impact on performance or aesthetics. 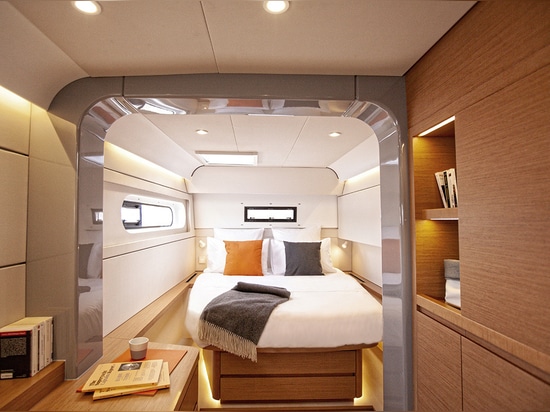 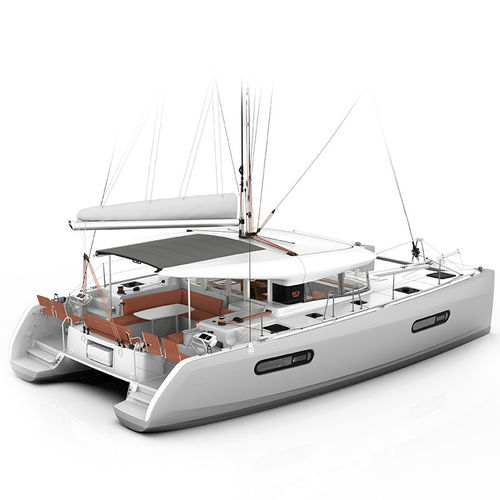