It is hard to imagine a boat that could be any more “Made in Italy” than Grand Soleil’s new 80-footer.

From the deck gear by Antal and Ubi Maior to the design by celebrated Italian racing designer Giovanni Ceccarelli, this boat presents a real “bella figura”. And the setting for her unveiling to a small group of international journalists (and a large group of hangers-on) is equally redolent of Italia – bobbing at a limestone quay on a town square fringed with terracotta roofs.

She represents a massive leap for Grand Soleil, whose previous flagship was a 58-footer – a fast, well-reviewed production cruiser. Not only that, but she is the brand’s first all-carbon design (the smaller 48 was originally built in vinylester). Although the GS80 is built by a subcontractor with experience of large carbon yachts, having built many Wallys, it still represents an investment of €1m by GS brand owner Cantiere del Pardo.

Like all carbon boats, she seems to sit on the water rather than in it. And the minimal, pleasing lines penned by Ceccarelli add to the sense of grace. There is a slight convex curve to her open transom, and the shear seems to run straight as an arrow forward to the long bowsprit. There’s no mistaking this yacht’s racing intentions, with her open decks, near flush coachroof, reverse bow and bevelled bulwarks. But yet, she has something in common with the smaller production yachts. “When you work with a yard, you have to work in their story,” says Ceccarelli. “The GS80 has a Grand Soleil-style coaming with windows in it.”

The hull is designed to be as fast as possible. Not only does the carbon build keep weight down to a decent 33 tonnes (light ship), but the shape of the hull uses the time-honoured principle first established by designers more than 100 years ago. “When the boat heels, it increases the dynamic length of the hull,” explains Ceccarelli, who has worked on the America’s Cup yacht Italia II and a host of other top-level racers.

During a light-wind test, our boat speed matched the true wind speed upwind – between 5 and 6 knots. The black laminate sails by Banks Sails of Italy use a proprietary technique that blends super lightweight Dyneema with carbon fibre and results in a hard-wearing sail that performs exceedingly well. She sets a generous 365 square metres upwind, while the long bowsprit offers a tack point for a huge reaching sail that can manage an easy 15 knots.

Romanian owner Catalin Trandafir previously owned a Grand Soleil 58, and wanted to trade up to something bigger for his family. Accordingly, the transom garage can house a 3.8m Pirelli tender, and the interior space is flexible and comfortable. But he also has racing in his blood. “We’re planning to do the Rolex Middle Sea Race, the Maxi Rolex Cup and the Voiles de St Tropez,” he tells me, before admitting that there is much work to be done to ready the new crew and the new boat for such a campaign. In the event, the boat was dismasted before it could enter the autumn Maxi events (no fault of Grand Soleil), but it posted respectable middle ranking in the early Rolex Cup races.“I came with my own ideas and architect,” Trandafir says firmly. “Grand Soleil was probably the only yard in Italy that could have built it for me.” His desire for privacy was paramount in the design of the yacht’s interior. The crew area is aft, under the cockpit, with a large galley and a twin cabin on the port quarter. A further starboard-side cabin can be turned over to a chef, for instance, or a pilot; or it can be sealed off from the crew area and connected to the guest section of the boat as an extra cabin.

Between the three guest cabins forward and the crew area aft is a cavernous saloon, with a big table to port and loungy sofas to starboard. Fortunately Grand Soleil had the foresight to install handrails along the coachroof here, otherwise it’d be a dicey space to cross on the heel. As we’re about to explore the owner’s accommodation in the bow, Ceccarelli puts a hand on my arm. “Look at that,” he says, gesturing at the bulkhead and the corridor leading forward. “It is asymmetric, but you wouldn’t realise. On a yacht it is important to appreciate the length, so in your mind, you don’t divide the space up.”

The dimensions in the owner’s cabin forward are impressive, with two large hull windows and hatches overhead, as well as a good-sized shower room. Small details impress me: a rich, chocolatey leather finish to a lampstand or a handrail here; plush fabric wall panels there. “For a lighter boat, we have designed the interior furniture to be removable,” says Pardo project manager Rafaele Burgio.

Of course, ‘custom’ is a much-abused word in yacht design, and it is not quite the case with this boat either. Although the brief was established by the owner and delivered by Ceccarelli and the yard, she was built using series tooling and there are already plans to build one with a raised deckhouse. There are still plenty of details that can be changed – it’s just a question of money. Yet as Burgio was keen to point out to me, the boat costs perhaps half of a similar sized Scandinavian build, at €4m. “Our typical customer comes from outside Italy, and they’re looking for something a bit different to many other production yards. They want ‘made in Italy’ and nice materials,” he concludes. 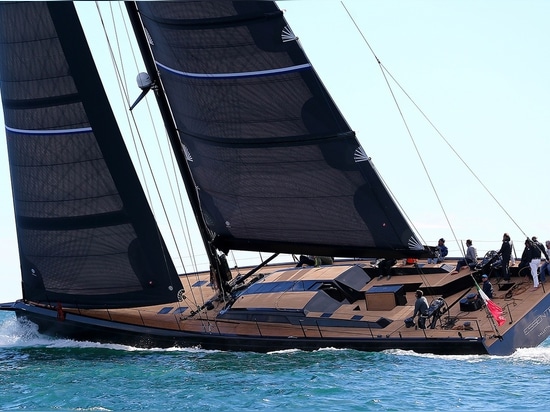 The GS80 is the new flagship of Grand Soleil brand 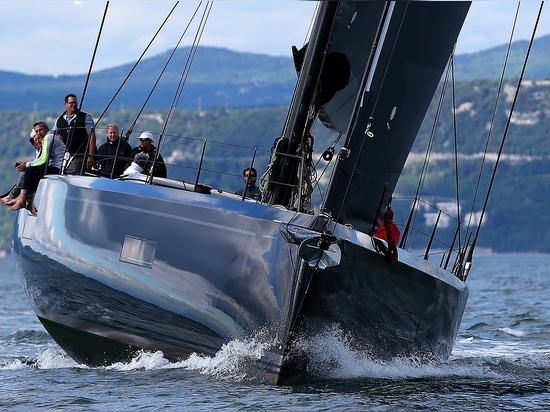 The yacht is the brand's first all-carbon design 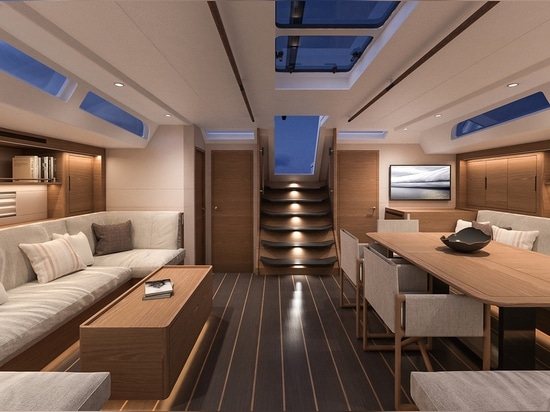 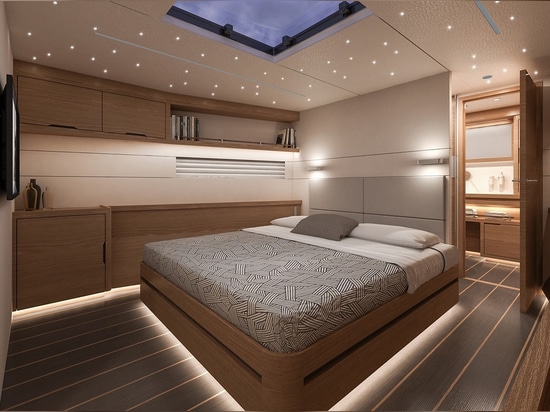 There are three guest cabins forward