Penned by Santa Maria Magnolfi, the concept was revealed at the Fort Lauderdale International Boat Show.

Intended for Bahamas cruising and named after Abaco Island, the concept is a “tribute” to those affected by Hurricane Dorian.

Baglietto said it would donate a percentage of the first sale of the project to efforts to relief efforts in the Bahamas.

The concept pairs “robust” exterior lines with plentiful and open exterior spaces. These include the main deck, which boasts more than 120 square metres of outdoor space.

At the stern, the cockpit and beach club join together and feature an infinity pool and comfortable sunbathing area.

The main deck also includes a winter garden with a bar and living area that can be opened to the elements thanks to floor to ceiling sliding glass doors.

Guest accommodation is for a total of 10 guests and includes an owner’s suite with an office and his and her bathrooms on the main deck.

The remaining four guest suites sit on the lower deck alongside the crew mess and accommodation at the bow.

Another 170 square metres of exterior space is spread out across the upper deck, sundeck and bow area to provide plenty of space for entertaining guests.

The interior design meanwhile is a “continuity of the exterior” and features natural materials such as teak, straw, linen and tropical woods for “an exotic touch, freshness and elegance”.

Elsewhere, the tender garage can accommodate a six-metre tender while a second forward garage can swallow a rescue tender and various water toys.

Propulsion will come from a pair of CAT C32 ACERT D rated engines for a top speed of 17.5 knots and a cruising speed of 12 knots. A hybrid alternative is also available. 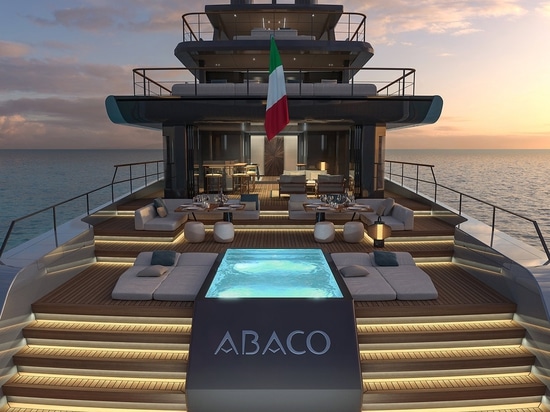 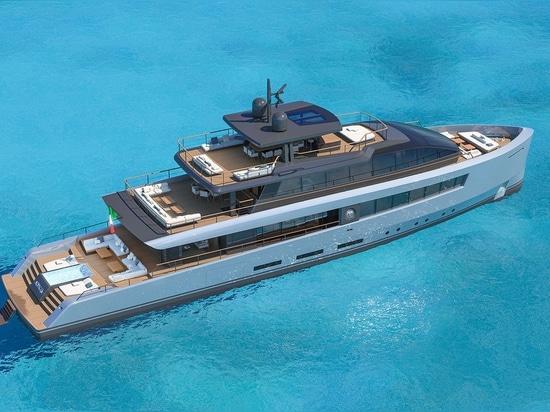 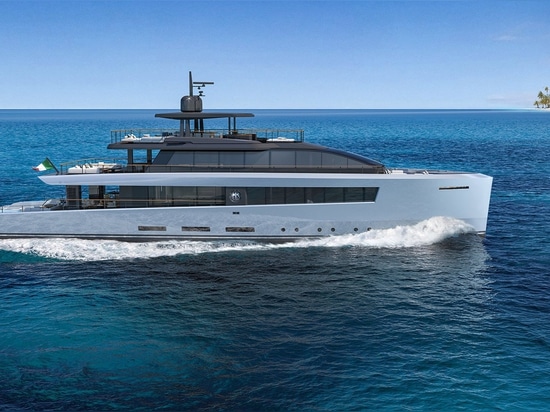