Eastern Shipbuilding Group Inc. (ESG), Panama, Fla, which incurred massive damage from Hurricane Michael 13 months ago, celebrated its comeback with a giant splash on Nov. 15 when it launched the Michael H. Ollis, the first of three ferries for Staten Island Ferry the shipyard is building for the New York City Department of Transportation (NYCDOT).

“The launch of this iconic Staten Island ferry marks a significant milestone in the recovery of Bay County and Northwest Florida,” Eastern’s president Joey D’Isernia said as Florida Gov. Ron DeSantis, hundreds of employees and special guests, the Coast Guard and others gathered for the event.

D’Isernia noted that both the shipyard’s Allanton facility, where the launching took place, and the company’s Nelson Street yard were “virtually unrecognizable” following the storm. Many buildings were severely damaged or destroyed, but several partially built vessels, including the ferry, suffered little or no damage. The workforce was back building vessels in a matter of weeks, ESG executive vice president and COO Kenny Munroe told WorkBoat.

The three new Ollis-class 320’x70’x21’6” double-ended ferries are from a design by Elliot Bay Design Group, Seattle. Each 4,500-passenger ferry features four Electro-Motive Diesel (EMD) 12-710 EPA Tier 4 marine propulsion engines, with two engines powering one Reintjes DUP 3000 P combining gear, and one 36 RV6 ECS/285-2 Voith Schneider propeller at each end of the vessel. Total installed horsepower is 9,980. The ferries will each have a crew of 16.

Eastern secured the $257 million contract to build the three ferries through a competitive bidding process in 2017. There was no increase in price following the hurricane damage, according to a NYCDOT spokesperson.

New York City has operated Staten Island Ferry since 1905. The ferries, which run 24/7 on a 5.2-mile route between St. George Terminal on the north shore of Staten Island and Whitehall Terminal in Lower Manhattan, carry close to 23 million passengers annually.

The Michael H. Ollis is slated to be towed from the Gulf of Mexico to New York Harbor in August 2020 after sea trials are completed. It will be the first new ferry added to the fleet since 2006. The layout of the three new Ollis-class ferries is similar to the 52-year-old John F. Kennedy ferry, a favorite of commuters and tourists because of its outdoor promenade seating and extended foredecks. The Kennedy and two other boats are expected to be retired once the new ferries come into service.

Staten Islanders chose to honor one of their own in naming the new ferry. Army Staff Sgt. Ollis was a Staten Island native who was killed by a suicide bomber at age 24 while on his third tour of duty in Afghanistan.

The second of the new ferries will be named Sandy Ground in recognition of a nineteenth-century African American settlement on Staten Island. The third ferry is unnamed. Launch dates for those ferries are pending, according to Eastern Shipbuilding. 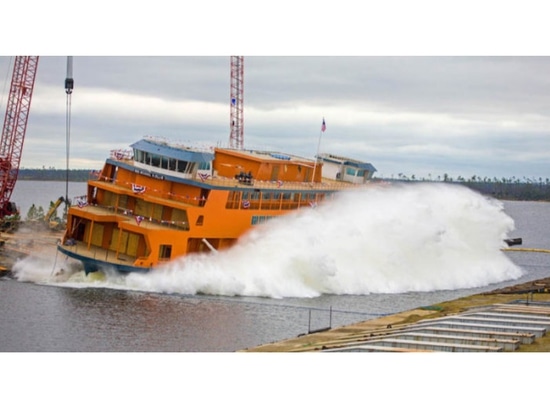