The highlights at the Sailing Center

January in Germany is dark and cold, but when the experts in the Sailing Center begin to talk about their adventures, the visitors of boot Düsseldorf find themselves in paradise. The blue-water, long-distance and circumnavigators create a feeling of sun and sea that is tangible for everyone. ocean yachtsmen and regatta participants will take you to the other extreme. Whether one-handed, around the world or across the Atlantic, they present a completely different perspective.

The highlights at the Sailing Center

Quite often he had already announced that it was the last trip, but legend Wilfried Erdmann is connected with sailing and water like no other. "Warum wir immer weitersegeln" is the title of his latest book, which probably provides the answer.

„Die Segeljungs“ are standing at the very beginning of their „sailing life“. After finishing school in 2019, the four friends went out into the wide world. With little sailing experience they simply went straight into the adventure. A courageous step into the blue and a journey in which they let their fans participate through entertaining video blogs.

The Mini-Transat is currently holding the fans of the offshore scene in suspense. The one-handed transatlantic regatta from east to west is sailed on the 6.50m Class Mini. Morten Bogacki, the only German skipper in the race, did excellently with his Proto-Mini "Lilienthal". The first leg to Gran Canaria was a big challenge, because both autopilots failed, so that he had to steer himself continuously. On the second leg he finished third.

The Vendée Globe is the highlight of the regatta calendar 2020 and this edition will be more exciting than ever! The non-stop one-hand regatta around the globe, is considered one of the toughest sailing regattas in the world. Eight new ships with foils, several strongly optimized IMOCAs with new foils, state-of-the-art technology and talented skippers promise a race of extremes. Boris Herrmann is the first German sailor to start and he wants to conquer the 45,000 kilometres. The preparations are running at full speed for Conrad Colman as well, because one thing is clear - nothing will be given to the sailors in this one-hand race.

Another star guest will be the Frenchman Jean Luc Van Den Heede who visits the Sailing Center. His biggest success is probably winning the Golden Globe Race 2018/19. At 73 years of age, the oldest participant, he managed to win non-stop in 212 days with a Rustler 36. His experiences prove how exposed the sailors are to the forces of nature. In the Pacific his boat was thrown to the side by a rolling sea so violently that the mast dived into the water. He built a new lower shroud out of ropes and was able to continue the race.

Second place in the 50th anniversary edition of the Golden Globe Race went to the Dutchman Mark Slats, who came a few hundred miles close to Jean Luc Van Den Heede until the last day. According to Don McInytre, founder and organiser of the race, the race will now take place every four years. The retro regatta, which is sailed one-handed on yachts constructed before 1988 and only allows sextant and paper charts on board, takes the participants to the limits of what is possible.

But that's not enough - a new retro race around the world is planned for 2023. The Ocean Globe Race will be sailed with a crew and is scheduled to celebrate the 50th anniversary of the first Whitbread Round the World Race. The first participants have already registered. The Finnish offshore sailor Tapio Lethinen wants to participate with his crew on a Swan 55. He was also a successful participant in the Golden Globe Race 2018/19.

The 14th Ocean Race, "The Ocean Race" (formerly Volvo Ocean Race) is scheduled to start in Alicante in 2021. The Austrian Ocean Race project is a young and ambitious team of international sailors with the big goal to participate in the next "The Ocean Race". The boat is the former Vestas "11th Hour Racing" a Volvo Ocean 65, which already competed twice in the race.

Preparations for the 36th America's Cup in March 2021 are in full progress. The four registered teams are putting everything into the latest development of technical innovations. Insider Jack Griffin will shed light on current developments.

The Clipper Round the World Yacht Race offers an opportunity for amateurs to smell some offshore air in race mode. Race Crew Director of the Clipper Race, Della Parsons, will give insights behind the scenes of the race around the world. Ina Baum registered to participate during the boot 2019 and is now member of the crew of Clipper 70Zhuai. One year later she reports about her unique journey. In the last edition of the race (2017-18), Wendy Tuck skippered the 70-foot yacht to victory, the first woman to do so. Nikki Hendersson and her crew took second place. Hendersson is currently skipping Greta Thunberg across the Atlantic on board the catamaran "La Vagabonde".

Lina Rixgens wants to go again! As the first German woman to finish the race, she was on the starting line at the Mini-Transat 2017 in the category of production boats. Since summer 2019 she is on her way with a newly built Mini 982 (Wevo 6.5) to be back in 2021. Lennart Burke made his long-cherished dream come true in 2018 and set off with a friend for the 10-month Atlantic Round. Now he wants to cross the Atlantic in race mode and also starts a mini campaign.

The highlight of the Tutima women's race calendar was the Rolex Fastnet Race in early August 2019. Thanks to long preparations and intensive training, the crew reached after three days, six hours, 58 minutes and 15 seconds the finish line in Plymouth. Nearly 400 boats from 26 nations started to sail the 605 nautical mile course around Fastnet Rock non-stop.

Claudia and Jürgen Kirchberger have been travelling with their expedition yacht LA BELLE EPOQUE for over eight years. The journey took them to the most extreme sailing areas in the world. In the Sailing Center they report about their trip to South America via the Roaring Forties. The following summer they leave Cape Horn and sail through the dangerous Drake Passage to spend three months in the Antarctic ice.

Matthias and Maren Wagener dared the change from Monohull to Multihull. They exchanged their car, apartment and a permanent office for a catamaran and run their successful business from there.

Two young men, best friends, crazy about sailing and climbing, are on their way since autumn 2018. With their yacht "Basecamp" Markus and Achim are looking for adventures in Scandinavia. Charming and entertaining they captivate the audience.

Kim Burmeister, successful German blogger, mixes up the water sports scene with her relaxed and fresh manner. On her 30th birthday she fulfills her dream of owning a boat and makes it her home a year later. She lives according to the principle "just do it" and "if it's not good, change it". She wants to inspire and motivate to believe in yourself and to make your own dreams come true - at least a bit.

Heide and Erich Wilts talk in a thrilling lecture about pristine, vast nature and coasts that have never been explored by a yacht before. They talk about the dramatic loss of their Freydis II in Fukushima 2011 by the tsunami of the century and the radiation of their yacht by the destroyed Japanese nuclear power plant. Although the Wilts are both approaching their 70s, they dare a new start, build their third Freydis and started a new world tour from Germany in 2012. In 2017 they wanted to return to Europe and decided to make their way back through the legendary Northwest Passage in the north of Alaska and Canada - one of the greatest challenges they have ever faced.

After four and a half years of circumnavigating the world with 37 countries, 143 islands, 140 fellow sailors and around 45,000 nautical miles in the bow, in 2019 Mareike Guhr ventures into a new project ("Island Child"), which has already led her through the Mediterranean to the Caribbean. It doesn't just go to the most beautiful oceans in the world - this time the focus is on trips to the remotest islands of our planet and the support of children in need. For this she bought a new catamaran.

Gangerl Clemens has been at home on the world's oceans since 1988 and has visited over 100 countries around the world. In his first book "Der Paradiesjäger - für immer ausgestiegen" he describes all his experiences starting with shipbuilding and his terrible time in Greek custody up to his worst experience, the six-day century storm cyclone "Polly" with its 20 meter high waves.

Sönke Roever represents the blue water scene like no other. The travel lectures of the circumnavigation with his wife Judith in 1200 days take the listeners out on the oceans.

World circumnavigator Hinnerk Weiler was this year in the domestic waters on the way and took part in South Coast Baltic Boating Rally. In 2019 the rally started for the fourth time from Bornholm, for the first time on a western route, via Westpommern to Vorpommern. For both owners and charterers, the rally is an attractive overall package with free berths and program ashore with enthusiastic sailors at great locations in the Baltic Sea.

The sailing world on the pulse of time

Corentin de Chatelperron is a French engineer, adventurer and founder of the NGO "Gold of Bengal". To demonstrate the potential of jute in shipbuilding, Corentin built a small sailing boat, the Tara Tari, in 2009. With this boat he sailed six months from Bangladesh to France. He completed most of the adventure on his own. In March 2013 a second prototype boat was built, the "Gold of Bengal" and another expedition started. Since February 23, 2016, Corentin has a new adventure in mind on board the 45-foot catamaran "Nomad des Mers". A four-year journey around the world is planned, during which exciting and inspiring developments will be found and the corresponding developers met.

For the first time, the young sailor of the year 2019 will be honored on stage in the Sailing Center. The prize is awarded in cooperation with IMMAC, DSV and SVG/Segler-Zeitung, the jury is made up of Timo Haß (youth chairman of DSV/Presidium member), Matthias Graf zu Castell-Rüdenhausen (GF IMMAC Sailing Akademie, IMMAC Holding AG authorised signatory), Ralf Abratis (editor-in-chief of Segler-Zeitung), Hermann Hell (publisher SVG Verlag) and Petros Michelidakis (boot Director).

Emily Penn has been enriching the Sailing Center with her lectures for several years now. As head of "eXXpedition" she starts ocean sailing expeditions with only women around the world with the aim to raise awareness for the devastating environmental and health effects of disposable plastics and poisons in the ocean and to find possible solutions.

Service topics in the Sailing Center

Oliver Ochse and Carsten Kemmling demonstrate the optimal rig trim on a boat. Weather expert Meeno Schrader gives valuable advice to recognize typical weather conditions. Metreologist Sebastian Wache informs about the work of a weather router, what to do in case of sudden weather changes and when the optimal time and route for an Atlantic cruise is. Professional sailor Helge Sach gives foiling tips for everyone and Duncan Wells presents amusing recommendations for stress-free sailing. If things go wrong, Dirk Hilcken has tips for damage completion with the help of yacht insurances. With "Gotosailing.com" Ulrich Küppers has created a platform that is ideally tailored to the needs of the charterer. 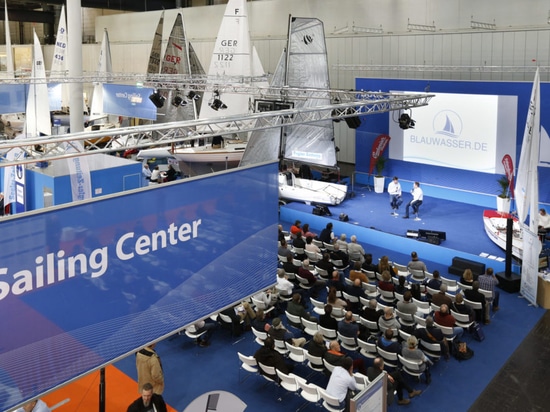