Cox Powertrain CXO 300hp, the world’s first 300hp production diesel outboard, is here at last thanks to the engineering expertise of a pioneering British company

The dream of a powerful but refined diesel outboard engine is about to become a reality.

Unlike rival diesel outboard manufacturer Oxe, which uses a highly tuned marinised version of General Motors’ 200hp 2-litre four cylinder car engine, the CXO 300 has been designed from the ground up as a purpose-built marine outboard engine.

Developed in conjunction with British-based engineering specialists Ricardo, who have worked with everyone from McLaren Cars to Bugatti, it uses a brand new four-stroke 4.4-litre V8 block.

Cast from aluminium alloy, rather than steel, to keep the weight down and featuring a narrow-angle 60° V to reduce its footprint, it’s not just the most powerful diesel outboard engine in production, it’s also the most sophisticated.

High-pressure common rail fuel injection, twin turbochargers and a compression ratio of 16:1 help it to develop an impressive 300hp at the prop (its crankshaft power peaks at 338hp). However, it’s the maximum torque figure of 479ft lb (650nm) and the fact that it’s delivered all the way from 1,300rpm to 3,000rpm that is likely to be of most interest to boat owners.

Cox claims this is almost double the twisting power of its 300hp petrol-powered rivals, a claim that’s hard to disprove given that manufacturers of petrol outboard engines rarely reveal their engine’s torque figures. Whatever the true advantage, the CXO 300 should deliver strong acceleration and effortless cruising right through the rev range, even on heavier craft that might struggle with conventional petrol-powered outboards.

The block itself is mounted vertically so that power is delivered directly down a steel shaft to a universal joint as opposed to Oxe’s solution of a horizontal block with a transmission belt taking power down to the propeller shaft. The gearbox has been deliberately over-engineered to cope with the torque and increase its durability. As a result it is claimed to have up to three times the life expectancy of a petrol engine and be at least 25% more fuel efficient.

Despite concerted efforts to keep its size and weight as low as possible, the CXO 300 is no slim jim. It tips the scales at 375kg, just over 100kg more than Mercury’s latest 300hp V8 Verado petrol. That’s because the high compression ratio of a diesel engine means the block has to be substantially more robust than a petrol engine’s. To put that figure in perspective, the nearest inboard diesel equivalent, Volvo’s D4 300 DPH, weighs in at 483kg.

Fuel consumption is hard to quantify until we can sea trial the engine on a boat, as the unusual torque characteristics mean it will swing a larger propeller with a steeper pitch than a petrol engine without any loss of speed or acceleration. That said, Cox’s own bench testing suggests that it burns just over 10lph at 2,000rpm, rising to 50lph at 3,500rpm, the range where most of its cruising is likely to be done. It revs to 4,000rpm but unlike petrol engines, which rev to around 6,000rpm, the Cox’s power delivery is best below 3,500rpm.

Although the engine, drivetrain and leg are all purpose-built, there is one area that Cox have sought outside help for. The steering and throttle controls are all being supplied by Seastar Solutions, including the option to fit a joystick control for twin-engined applications– there’s no point reinventing the wheel if you can buy a ready-made solution off the shelf.

The engines are being built at a brand-new facility in Shoreham, West Sussex, with a worldwide network of dealers and distributors – Berthons in Lymington will cover the UK.

All this technology doesn’t come cheap: prices start at £42,000 inc VAT for the CXO 300, roughly £16,000 more than a comparable petrol outboard. However, Cox is confident that over the life of the engine, savings from fuel and maintenance requirements (service intervals can be as long as 1,200 hours) will more than make up for the higher initial outlay. All engines are covered by a five-year recreational and 18 month/1,500 hours commercial warranty. The wider availability of diesel in marinas, the 25% extra range it will give from any given tank size and the relative ease and safety of storing the fuel are further benefits, especially for commercial and superyacht tender applications. 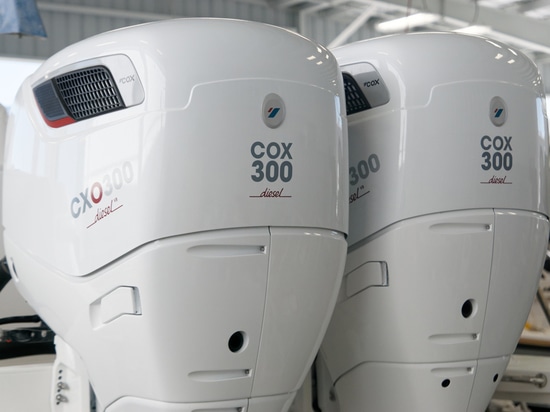 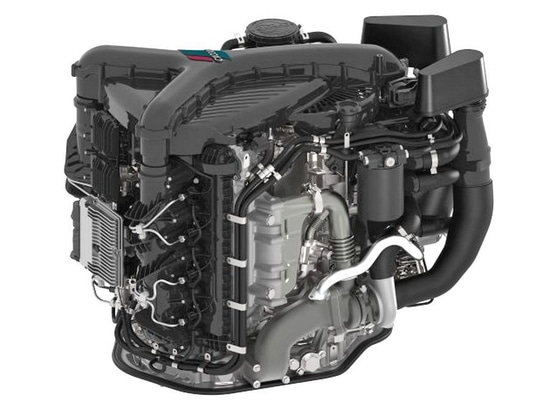