Eastern Shipbuilding Group has completed the largest tugboat newbuilding campaign in US history with the delivery of the 70th towboat to Florida Marine Transporters.

In a programme that has lasted 14 years, Eastern Shipbuilding has built 70 of the same class of towboat design for Florida Marine in a huge investment campaign by the owner.

This newbuilding campaign, originally contracted in December 2004, has boosted Florida Marine’s fleet to become one of the largest providers of transportation services on US inland waterways.

Florida Marine’s investment has been across market cycles to improve transporting bulk and liquid products on US inland waterways. This market is beginning to improve after one of the worst downturns in its history.

Towboat construction started with an initial order for 25 vessels in December 2004, with deliveries starting in February 2006. This was subsequently expanded multiple times over the past 14 years.

The latest extension was in Q1 2018, at the bottom of the current market cycle, when Florida Marine ordered four more vessels to increase the total order to 70 towboats. This was completed in December 2019 when Jaden Pasentine entered service.

Delivery of these towboats since 2006 has enabled Florida Marine to operate one of the youngest towboat and tank barge fleets in the industry. This is part of Florida Marine’s chief executive Dennis Pasentine’s vision for efficient and safe inland marine services in the US.

Jaden Pasentine was constructed at Eastern Shipbuilding’s Allanton facilities in Panama City, Florida. It was built to a design furnished by Boston-headquartered Gilbert Associates with an overall length of 27.4 m. It has a breadth of 9.8 m and hull depth of 3.1 m.

Jaden Pasentine’s propulsion power comes from a pair of Caterpillar 3512C diesel engines, supplied by Louisiana CAT Power Systems. These were engineered to comply with US Environmental Protection Agency’s (EPA) Tier 3 emissions requirements and to generate 1,120 kW of power at 1,600 rpm.

These each drive propellers through reduction gears directly coupled with Twin-Disc model MG-5600, with a 6.04:1 reduction, provided by Stewart Supply.

Inside the engineroom are two John Deere 4045AFM85 generator sets, each producing 99 kW of electrical power with 208 V alternating current at 60 Hz. These were provided by Kennedy Engine Co and also comply with EPA Tier 3.

The previous delivery in this newbuilding batch, DPJ II, was delivered to Florida Marine by Eastern Shipbuilding in August 2019.

Eastern Shipbuilding has also built a fleet of escort tugs for McAllister Towing over the last two years with the last of the series, Capt Jim McAllister, delivered in Q3 2019.

These four vessels are the most powerful tugs in McAllister’s fleet with bollard pull of 80 tonnes and comply with EPA Tier 4 emissions requirements. 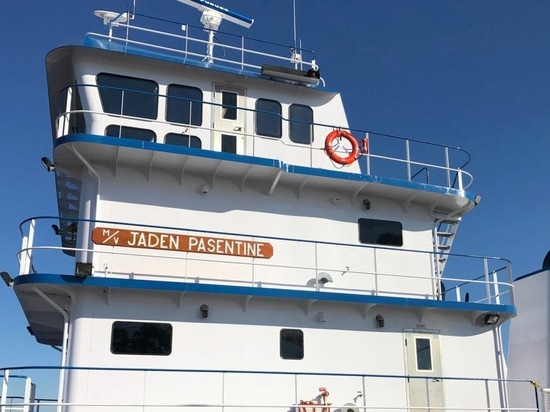