In an announcement at the International Workboat Show in New Orleans, the Canadian naval architect said it would develop gas-powered pushboats and cryogenic transport barges for Hidrovias do Brasil to transport LNG in the Amazon Basin. The goal is to meet regional demand in Brazil from local thermo-electric plants and industrial complexes with combined demand potential of over 5M m3 of natural gas per day.

Currently, the most widely used fuels for waterway transportation are heavy fuel oil and marine diesel oil. Switching to natural gas will offer economic and environmental benefits, with LNG expected to cost about 45% less than fuel oil for the same power while also significantly reducing greenhouse gas emissions.

The second phase of the project will be developing electric pushboats capable of manoeuvring barges with approximately 2,000 tonnes of cargo. Robert Allan expects the electric pushboat design to reduce fuel and maintenance operating costs by up to 20%. In a study to analyse the viability of the project, the new pushboat can reach next to zero emissions condition when powered only by batteries.

Using LNG and batteries will contribute to the future of waterway logistics, as well as promoting a more sustainable, cost-effective and more productive solution. Both the electric pushboat and the LNG convoy are expected to be operational by 2021.

The project also comprises an LNG Terminal in Baracena under development by Hidrovias do Brasil. Hidrovias do Brasil has a preliminary licence for the terminal and once it secures an installation licence from State Environmental Secretary it expects to build the facility in 18 months.

Shell International Trading Middle East has reportedly signed a long-term agreement with Hidrovias do Brasil to supply LNG to the Vila do Conde thermal power plant in Baracena in the Brazilian state of Pará. If the 1.67-GW power plant is contracted in the next A-5 auction by Brazil’s National Electric Energy Agency (Aneel) in 2020, Shell would supply gas to the facility for 25 years.

It is estimated that the gas power plant would consume as much as 6.7M m3 of gas per day (gpd). The feed gas would come via pipeline from a floating regasification and storage unit (FSRU) moored at the Hidrovias do Brasil LNG terminal in Vila do Conde. The FSRU would have a capacity to store 200,000 m3 of LNG, with the ability to regasify 14M m3 gpd.

The LNG would be supplied from Shell’s portfolio, including LNG export terminals in the US.

Hidrovias do Brasil is not the only company developing gas-to-power projects in the region. Golar Power Limited, a 50-50 joint venture with Stonepeak Infrastructure Partners, was awarded the PPA to construct a 605-MW combined cycle thermal power plant by the Brazilian National Electric Energy Agency.

The LNG-to-power project will be developed by Centrais Eletricas Barcarena, a company 50% controlled by Golar Power. Located in Barcarena, the 605-MW power plant will use imported LNG to generate electricity using H-Class gas turbines. The power will then be distributed to the Brazilian national electricity grid through an existing substation.

Golar LNG will invest US$107M of the US$430M estimated to develop the project, which will be funded through debt and equity between 2022 and 2025. The equity portion will come from proceeds of the first wave of small-scale distribution in Golar Power.

In connection with the PPA, Golar Power plans to accelerate investment in a new LNG terminal at the Port of Vila do Conde, also located in Barcarena. The terminal will be operated by Golar Power, which will provide an FSRU for 25 years to supply gas for the project. Prior to commencing power plant operations in mid-2021, the terminal will be used as a small-scale LNG distribution hub, supplying natural gas for electricity generation, commercial and industrial customers, transportation and bunkering in the region.

Golar is currently selecting an FSRU, with an anticipated FID on the project in H1 2020.

Some 1.7 mta of Golar Nanook’s 5.8 mta is expected to be tied up to the Sergipe power plant at 100% dispatch, leaving 4.1 mta of the FSRU’s nameplate capacity available, according to a Golar quarterly presentation.

In a separate announcement at the International Workboat Show, Robert Allan unveiled an approval in principle (AIP) from class society DNV GL for an LNG-fuelled, shallow-draft pushboat design, RApide 2800-G.

Based on an existing design towboat operating on the Amazon River, RApide 2800-G will operate on pure gas engines. The AIP validates that the vessel design is fully compliant with DNV GL class rules for ships (RU-SHIP) and the International Code of Safety for Ships using Gases or other Low-flashpoint Fuels (IGF code).

Robert Allan contracts manager Pedro Ventura said the AIP “is a demonstration of the excellent co-operation among the project partners throughout the challenging design development process.” Mr Ventura added, “Energy efficiency has always been a focus of our design efforts, and with the worldwide demand for lower fuel consumption and lower emissions, we have increased our focus in this area.”

DNV GL Maritime Americas executive vice president Antony DSouza said “We are proud to play a part in this novel project, one which will undoubtedly further the maritime industry in its transition to a low carbon future. The expertise and engagement of all the parties involved was vital to realising this challenging concept, and we look forward to seeing the first projects take life.”

While keeping the existing hull form, the arrangement was reconfigured to allow the LNG tank and associated equipment to be installed while still accommodating auxiliary machinery and continuing to provide a comfortable work environment for the crew.

Founded by Pátria Investimentos’ infrastructure fund, Hidrovias do Brasil is a major inland transporter of agricultural products and ore, carrying some 6.5M tonnes of grain and 6M tonnes of bauxite annually. 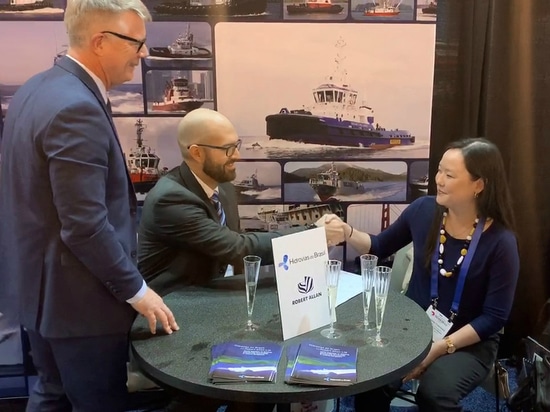