The German skipper Boris Herrmann, who is preparing to race the next Vendée Globe, and representatives of the SAEM Vendée are teaming up to promote the famous solo non stop race around the world to the German public and the thousands of international visitors who come to the huge annual German boat show. Together they are seizing the opportunity to raise awareness about the intoxicating magic of this extraordinary race and to highlight Boris's expected participation.

Boris Herrmann is, of course, well-known in the world of offshore racing after his participation in several major ocean events such as the 2018 Route du Rhum, the Barcelona World Race and the Global Ocean Race in Class 40s. But the German skipper takes a big step up as he strives to line up at the start of the Vendée Globe 2020. The collaborative approach by the skipper and the Vendée Globe organization at the Boot in Dusseldorf takes the chance to publicize the solo nonstop race round the world to a nation, which perhaps knows other ocean races better, not least the crewed Whitbread Volvo Ocean Race which was, after all, won by a German team in 2002. Both parties are sure this initiative at Boot will profit both the skipper and the race in terms of visibility and a greater understanding of the challenge that is the Vendée Globe, not least because no German solo skipper has finished the race so far.

"The priority will of course be to communicate about the Vendée Globe. There is an audience for this type of race: the proof is, the tens of thousands of spectators who came to Kiel for a stage of the Volvo Ocean Race. The participation of a German skipper is a first for the Vendée Globe and should offer an unprecedented focus on the race.

For our team, it is also an opportunity to promote the "My Ocean Challenge" program, which combines work to collect scientific data as we navigate the South Seas with an education and awareness program to the destination especially the youngest.

I am convinced that my participation in the Vendée Globe will allow the race to reach new audiences and further strengthen the international dimension of the event." 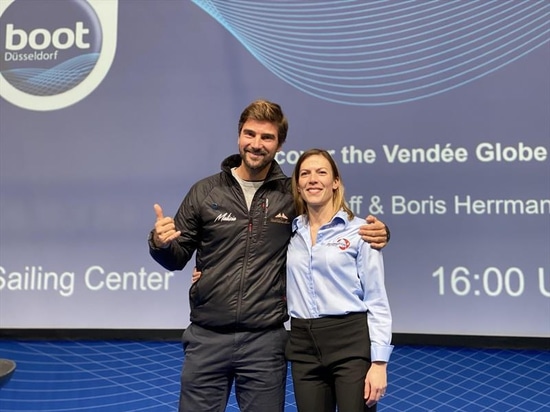