Will Oxley is eyeing another lap of the planet

Will Oxley
Australia
Add to favorites

Three-time The Ocean Race veteran Will Oxley has confirmed that he's eyeing at least one more lap around the planet, as the 2021-22 edition of the round-the-world race continues to take shape.

The experienced Aussie navigator - who has logged almost 300,000 circumnavigation miles in a long career - most recently sailed as navigator onboard Team Alvimedica in the 2014-15 edition, alongside 11th Hour Racing Team's Charlie Enright and Mark Towill.

"I'd like to feel I'm not yet done with round the world racing, I'd like to be involved with at least one more," Oxley told Tip & Shaft, the online magazine.

"The IMOCA's offer a chance to get back into more of the sailing so that part of it is very appealing. The best sailing I've done in my life has been on the IMOCA 60's with the doublehanded race to Brazil and around Britain and Ireland (Oxley was co-skipper with Brian Thompson in 2007 on Team Pindar before Thompson's Vendée Globe).

He added: "More and more as you spend time as a navigator you get pigeon-holed into being a navigator and I am a sailor as well."

Oxley was instrumental in Alvimedica's successful campaign, where, as the youngest crew in the 2014-15 edition, they exceeded expectations to lead the fleet around Cape Horn - and win the final leg into Gothenburg.

"The race is still trying to evolve. I think the IMOCA 60's are obviously the top end but what it really needs is more entries. It's going to be a tough race and it may well be that a squad system is going to work best. I'm interested [in getting involved in the Race] both from a shore side and an onboard side."

At 54, Oxley had one of the most illustrious seasons in his long professional sailing career in 2019, winning an historic double onboard VO70 yacht Wizard by taking victory on the RORC Caribbean 600 and the Fastnet Race and culminating in the team winning RORC Yacht of the Year. He then took his second overall Sydney Hobart win as navigator on TP52 Ichi Ban.

And the Australian, who is also a qualified marine biologist, believes that there's no substitute for experience.

"The weather and navigation is one of these things that as long as you keep your marbles and your fitness, you do get better as your experience builds. Experience counts, learning when to trust the models and when to trust yourself, you learn with experience," he adds. 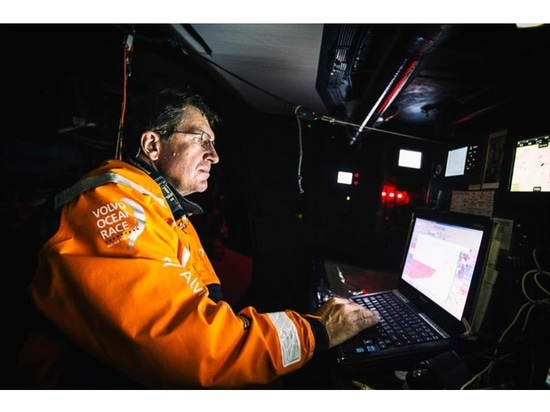 Leg 9 to Gothenburg onboard Team Alvimedica. Day 1. Free from the Bay of Biscay the fleet rounds Brest on the way to the English Channel,all within close proximity. Will Oxley hard at work in the nav station analyzing the English Channel's TSS zone.