Torqeedo has provided a battery-electric propulsion system for a new dual-mode boat recently launched by the Swedish Sea Rescue Society.

The new boat is the first-ever in the Sea Rescue Society’s fleet to have parallel diesel and electric motors. The primary powertrain is twin 650hp Scania diesel engines with water jets. The electric drive system consists of dual Torqeedo Deep Blue 50KW electric motors for a combined 160hp-equivalent with two 10kWh Deep Blue lithium batteries. The vessel can operate silently and emission-free up to 1.5 hours between recharges at a search speed of 6kts.

“We use the electric mode when entering and leaving port through Sweden’s environmentally sensitive waterways,” said Lars Samuelsson, head of the Maritime Department. “The crew uses the diesel engines for high-speed runs out to the rescue location, then switches back to electric for search and rescue operations. It is crucially important to go quietly on the job since even the smallest sound can hinder the search for a missing person in the water.”

The 14m (46ft) composite vessel, christened Rescue Mercedes Eliasson Sanne, carries a crew of three or four people for rescue missions. It operates out of the Rörö rescue station in Gothenburg’s northern archipelago. Its hull form is a development of the Society’s former Victoria class and has many features in common with the nearly 40 boats built in this class since 1997, but has been extended by about 2m for a more stable ride in the sea.

The Swedish Sea Rescue Society is a non-profit association that saves lives at sea without any government support. There are 2,200 volunteer seafarers along the coast of Sweden and in the largest lakes, ready to take off in all kinds of weather, all year round. The Society also works to prevent accidents at sea and to spread information and knowledge about maritime safety. 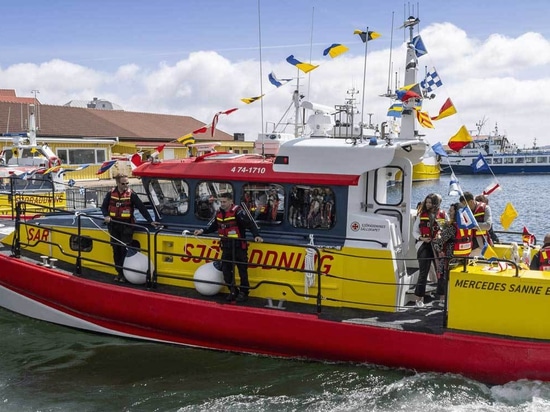