New - Pogo announces the arrival of the Pogo 44

The French shipyard Structures based in Bénodet (Combrit 29 - Brittany) completes its range of cruising yachts, by inserting a new Pogo 44 between the Pogo 12.50 and Pogo 50. The range now consists of 5 models, with the Pogo 30 and Pogo 36.

For this new fast cruising yacht, the Structures shipyard, builder of the Pogo yachts, has once again entrusted the Finot-Conq naval architecture firm to apply the very successful design of the Pogo 36 to a larger model.

The first thing that stands out in terms of style is the use of the Pogo 36's faceted roof portholes, which aim to provide light and a good view forward of the boat, as well as a "very pleasant wheelhouse effect for long cruising passages".

As for the hull, the Pogo 44 features a wide, chine hull, which guarantees high performance in planning and comfort when sailing at all speeds. The bow has a large volume, which is reminiscent of the Pogo 3.

This hull benefits from buoyancy foams, making the Pogo 44 unsinkable.

The keel of the Pogo 44, still made with a vacuum infused Monolithic Fiberglass veil and a lead ballast, receives the same hydraulic system as the Pogo 12.50 or Pogo 50 with an ejection preciostat in case of contact on a rock or sand bank on shore approach. The reduced draught of the lifting keel in high position allows access to the most difficult beaches.

The cockpit of the Pogo 44 is directly inspired by those of the Pogo 12.50 and Pogo 50, with the option of either one tiller - purists will appreciate - or two carbon tiller wheels for added comfort. All manoeuvres are performed from the piano on the Roof...

As far as rigging is concerned, the Pogo 44 can be delivered with an aluminium mast or a carbon mast without backstay, allowing you to sail with a more slender mainsail with a wide and powerful horn.

The bow of the Pogo 44 opts for a delphiniere, ideal for easily rigging all the headsails: Asymmetrical spinnakers, Code Zero and other gennakers. This dinghy also integrates the offset anchor winch for mooring. The latter has a generous volume and is divided into two parts, to place the sail area or mooring accessories.

What are the fittings for the interior of the Pogo 44?

A fast and efficient cruising sailboat, the Pogo 44 offers an interior that will not upset fans of the Breton brand.

Weight reduction - the boat weighs 5900 kgs - and the desire to lower the sailboat's centre of gravity as much as possible, result in a simple, clear, efficient and relatively low design.

The saloon accommodates an L-shaped bathing platform on the port side which faces the large work surface and the galley along the starboard side. The two aft double cabins provide a nice volume for this size of yacht. Depending on the programme, the Pogo 44 has one or two toilet cabins and a separate shower cabin.

The forward tip has one or two double cabins for the most numerous crews. 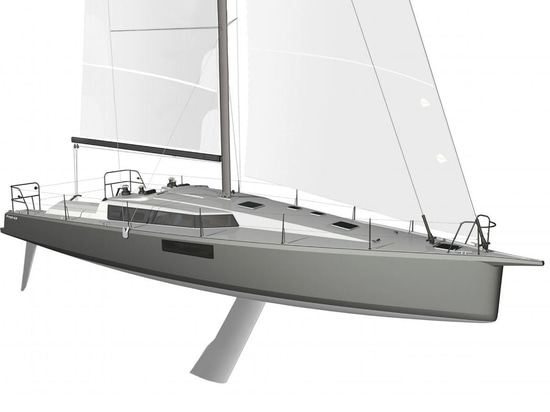 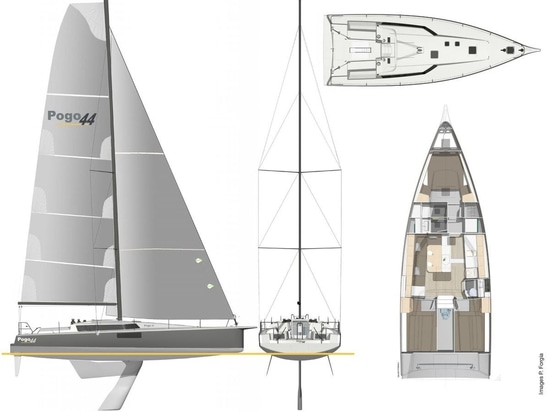