In case you haven’t realized, boats are like ice cream. You have to choose your flavor. Some are plain vanilla, some are chocolate, but Cruisers’ new 38 GLS is like the Neapolitan you remember as a kid. It blends the best of all flavors, and it satisfies, no matter what you are craving.

Want to go fast? Think 53 mph. Want to spend the night aboard? There’s a galley, shower and private stateroom. Want wind in your hair? Plant yourself in the bow seating for the ride of a lifetime. Want to just hang out at the local sandbar, splashing in and out of the water? Fold down the beach door that defines this versatile new water toy.

I have no idea what GLS means. Great little ship? Whatever it stands for, it’s quite an amazing bow rider with outboard power, and also the amenities and craftsmanship found on the larger Cruisers Cantius yachts.

This isn’t Cruisers Yachts first foray into outboard-powered dayboats—that was the 338 OB. The 38 GLS proves a whole different vessel. For one thing, it offers the unforgettable beach door that turns a section of the starboard coaming into a fold-down addition to the cockpit, increasing space exponentially while replacing the transom platform lost to the outboards. It brilliantly delivers a great hangout area that’s popular when you’re at a sandbar or playing with water toys.

Cruisers took the concept one step further and—because parents want to keep an eye on their kids—the aft-facing bench backrest swivels to face the “beach,” so parents can do just that.

That takes care of the aft end of the cockpit, and there are still two L-shaped midship dinettes, both with tables, that can handle a mob for munchies from the mini galley. This is equipped with the good stuff, including a grill, sink, fridge and ice maker, but the interesting fillip is putting two bar stools at the forward end of the galley counter. This surprised me because it occupies space usually given to a forward-facing companion seat, but I found the stools very usable. They add two more people to the cockpit entertainment zone and can be used for supervising the beach, and because they tuck into the corner, I was comfortable while the 38 GLS was running.

The skipper gets the best seat in the house, of course, behind the blingy chrome-and-leather tilt wheel facing a black nonreflective dash inlaid with two rows of recessed push buttons for various systems. The joystick and throttle-shifter are exactly where you’d want them, and I liked that you look through the windshield when standing, rather than over it (or at the frame). The varnished nonslip footrest is at the perfect angle, and the seat bolster flips up for standing room if desired.

The portside walkway leads forward (with a closure door for wind and spray protection), and the U-shaped bow seating offers streamlined headrests on the forward-facing lounge. A removable table converts to a sun pad, and I liked the up/down buttons for the anchor windlass on the deck so you don’t have to open the rode locker.

Down below is a surprise to almost rival the beach door: more than 6 feet, 5 inches of headroom. There’s an enclosed head to starboard (6 feet, 2 inches of headroom—wow) with a full shower. The forward settee/dinette is convertible to a berth, but the 38 GLS has a private stateroom tucked under the cockpit with a 6 ½-by-4 ½-foot berth, which is bigger than a double but a couple of inches shy of a queen. That’s more than enough for overnighting and great for secure naps for the kiddies. And a nearby microwave handles morning coffee without leaving the cabin, which is thoughtfully provided with a screen door to eliminate no-see-ums.

Underway, the 38 GLS is fun, with plenty of punch from the standard triple Mercury Verado 300 hp outboards (350 hp Verados are optional), and we easily reached just shy of 53 mph with several people aboard and full fuel. These Mercs give you joystick maneuvering for docking, and they aren’t going to melt your credit card for fuel either.

No big surprises, but the seaworthy hull has two strakes on each side and chine flats to improve stability and throw spray aside. We did doughnuts on Tampa Bay, crossing our wake from every angle, and the 38 GLS maintained perfect poise throughout. The triple Mercs have plenty of punch if you want to yank all manner of water toys, reaching planing speed (25.3 mph) in just 5.5 seconds and flat-out in just 21 seconds.

An option is a 5.5 kW genset to power the air conditioning at anchor and/or the blender for piña coladas at the sandbar. I was surprised that a built-in vacuum is standard, but it makes sense to deal with sandy feet.

A sterndrive version of the 38 GLS is coming, mostly to satisfy hardcore out-drivers or freshwater skippers, and I wondered what was under the big compartment aft on the outboard version. Turns out, the entire seating package rises on gas lifts, revealing a cavernous storage area (or perhaps a mother-in-law suite).

The Cruisers 38 GLS is genuinely likable. Whether you prefer chocolate, vanilla or strawberry, this is one tasty treat.

Flexible seating next to the beach door.

Ignition interlock on the beach door prevents up or down use when engines are running.

Great headroom, not just in the cabin but in the shower too.

Boarding gate to beach and transom is too low (14 inches) to be much use in slowing down kids. 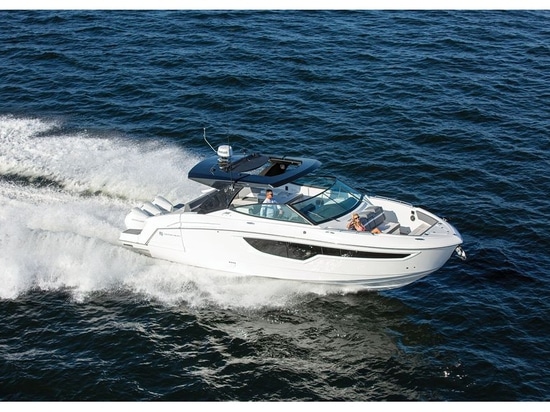 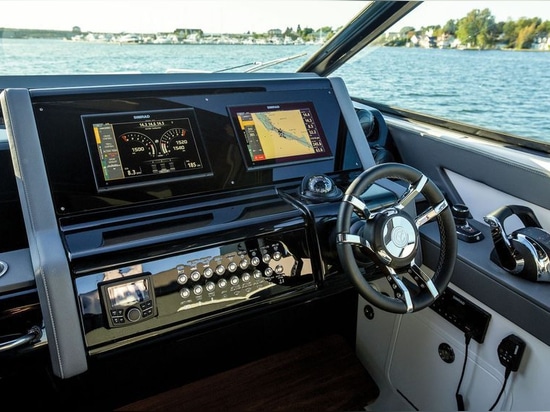 The nonreflective dash is inlaid with two rows of ­recessed push buttons for various systems. 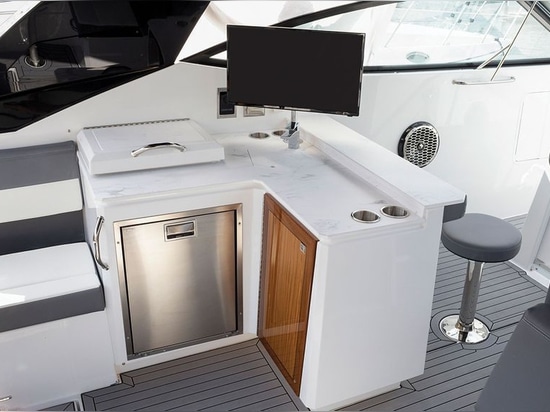 The cockpit is equipped with a grill, sink, fridge and ice maker. 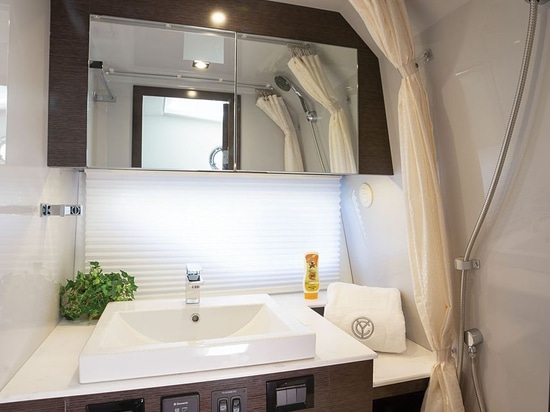 There’s an enclosed head to starboard with a full shower. 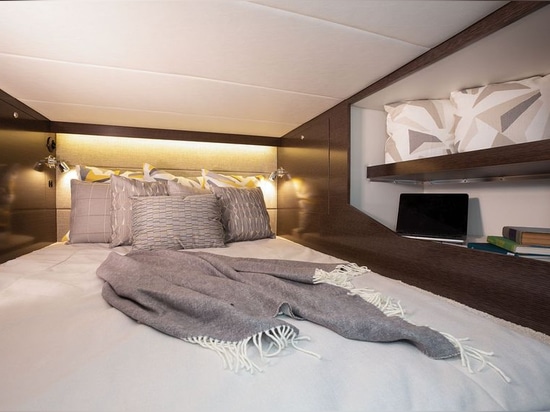 The 38 GLS has a private stateroom tucked under the cockpit