“Today represents not only the continuation of production for the Coast Guard’s future replacement of their 210-foot and 270-foot-class medium endurance cutters, but also an important step in the continuing recovery of northwest Florida and ESG post-Hurricane Michael,” Eastern’s President Joey D’Isernia said in a statement. “Looking back on the condition of our shipyard and our community immediately post-Michael in comparison to how far we have come, I could not be more proud of our team for what we have accomplished to date. We are excited about the future of this program and will continue to work diligently with our vendor network from 29 other states to produce high quality, highly capable vessels for the men and women of the Coast Guard.”

After Hurricane Michael, Panama City, Fla.-based Eastern submitted a request on June 30, 2019, for extraordinary relief after its shipbuilding facilities sustained significant damages from Michael, a Category 5 storm, in October 2018.

The Department of Homeland Security, in coordination with the Coast Guard, granted extraordinary relief to ESG for work on the OPC contract in October 2019. Contract relief was limited to the first four hulls on the basis that ESG’s performance on the OPC contract is vital to the national defense.

In 2016, the Coast Guard exercised the option for detail design on ESG’s OPC contract. The contract includes the production of up to four vessels.

In 2018, ESG, announced that the Coast Guard had exercised the option to build the lead 360’x54′ OPC Argus (WMSM-915). Delivery of the Argus was scheduled for 2021. The additional OPCs were expected to have far shorter build times than the three years it will take for the lead OPC.

At the time, the Coast Guard also exercised the option for long lead time materials for the OPC Chase (WMSM-916). The value of the two options was $317.5 million.

In 2016, the Coast Guard exercised the option for detail design on ESG’s OPC contract. The contract includes the production of up to four vessels.

The OPC is designed to conduct multiple missions in support of the nation’s maritime security and border protection. The OPC will provide a capability bridge between the national security cutter, which patrols the open ocean in the most demanding maritime environments, and the fast response cutter, which serves closer to shore. The OPC design includes the capability of carrying an MH-60R or MH-65 Helicopter and three operational Over-The-Horizon (OTH) small boats. The vessel is also equipped with a highly sophisticated combat system and C4ISR suite that will enhance capabilities to execute the service’s missions.

Main propulsion will come from twin Fairbanks Morse-MAN 16V28/33D STC diesel engines, producing 9,760 hp at 1,000 rpm each, connected to Rolls-Royce 5-bladed controllable pitch props, giving the OPC a running speed of 22 knots. The cutters will have a 60-day endurance and a range of 9,500 nautical miles at 14 knots. 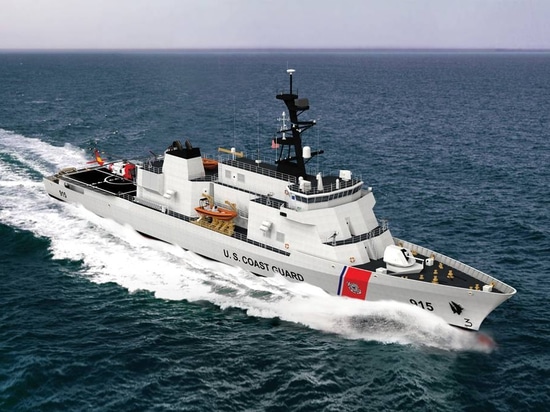 Eastern was awarded the contract to build the offshore patrol cutter by the Coast Guard on Sept. 15, 2016.