Designed in-house, the new 55 Defiant Pilot being built for the Pascagoula Pilots is the latest evolution in Metal Shark’s pilot boat lineup. The vessel incorporates the “faceted hull” design initially developed by Metal Shark for the Navy’s 40 PB patrol boat program and features an enhanced version of the Louisiana boatbuilder’s “pillarless glass” in a two-tiered, reverse-raked arrangement.

To meet the performance requirements of the operator, the new vessel will be powered by twin Caterpillar C18 engines rated at 803 hp each, turning Michigan Wheel 34″-dia. nibral 4-bladed propellers through Twin Disc MGX-5146A 1.961 gears. This combination will deliver an expected cruise speed in the 25-knot range and a top speed approaching 30 knots. An 800-gal. fuel capacity allows for a cruise speed range of approximately 280 nautical miles.

Metal Shark initially implemented automotive-style frameless glass into its pilothouse designs to eliminate the dangerous blind spots common on legacy pilothouse designs fitted with smaller, framed windows. As a further evolution of this concept, the new 55 Defiant’s pilothouse features a second tier of glass, drastically improving downwards-angle visibility during man overboard retrieval, or while operating alongside another vessel. Meanwhile, large overhead spotter windows provide unimpeded upwards visibility during pilot transfer maneuvers. The net result is near elimination of blind spots from within the pilothouse.

While its Defiant-class vessels are popular among a wide range of operators, Metal Shark has developed a wholly unique arrangement optimized specifically for pilots. Flat, non-skid decks run from bow to stern and allow pilots to move quickly and safely around the vessel. Safety rails and grab handles are carefully placed, and pilot boarding platforms are configured to suit the requirements of each operator.

For Pascagoula, the 55 Defiant has been equipped with a foredeck transfer zone with integrated stairways allowing port, starboard, or forward access to two deployable platforms with integrated safety rails allowing pilots to board ships from either side of the vessel.

Belowdecks accommodations include an enclosed head compartment with fresh water sink, bunks, and individual storage lockers for crewmembers’ personal items. Acoustic insulation and flooring are employed throughout the vessel to reduce noise and vibration.

“Metal Shark continues to develop next-generation pilot boat designs custom-tailored to meet the requirements of individual pilot groups, each based upon an extensively proven hull form,” Carl Wegener, Metal Shark’s vice president of commercial sales, said in a statement announcing the contract. “We’re excited to be building this new pilot boat for Pascagoula, which is their second Metal Shark pilot boat and the first in a series of this new 55’ Defiant platform.” 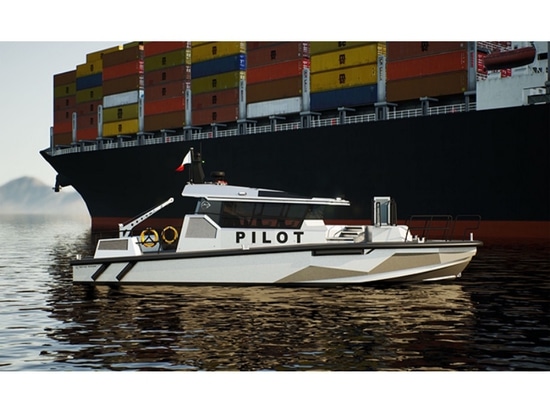